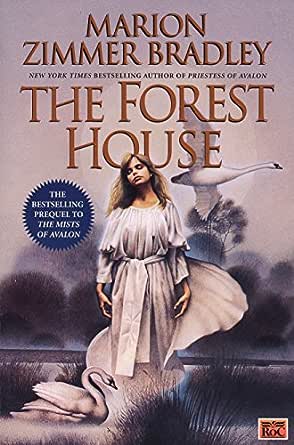 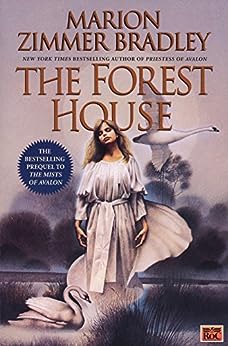 Praise for The Forest House "Compelling, powerful."--San Francisco Chronicle "A seamless weave of history and myth."--Library Journal "A magical evocation of a lost age."--Starlog

The New York Times bestselling science fiction and fantasy author of the Avalon series introduces the prequel to the beloved and enduring classic The Mists of Avalon in this mesmerizing epic of one woman’s legendary role at a turning point in history.

In a Britain struggling to survive Roman invasion, Eilan is the daughter of a Druidic warleader, gifted with visions and marked by fate to become a priestess of the Forest House.

But fate also led Eilan to Gaius, a soldier of mixed blood, son of the Romans sent to subdue the native British. For Gaius, Eilan felt forbidden love, and her terrible secret will haunt her even as she is anointed as the new High Priestess. With mighty enemies poised to destroy the magic the Forest House shelters, Eilan must trust in the power of the great Goddess to lead her through the treacherous labyrinth of her destiny.
Alle bekijken
click to open popover

Kindle Customer
5,0 van 5 sterren The Forest House....
28 juli 2016 - Gepubliceerd op Amazon.com
Geverifieerde aankoop
This is a far back prequel to the Mists of Avalon and an introduction to the next book, The Lady of Avalon. Back in the time when the people of Britannia weren't yet so dominated by Christian oppression and the Druids, were experiencing their first battles against Roman occupation of the territory. Avalon was not even a place yet and the priestesses were not quite independent yet. The Forest House is the just the beginning of the magical road to Avalon.
Meer lezen
16 mensen vonden dit nuttig
Vertaal recensie in het Nederlands

Robert D. Herrick II
4,0 van 5 sterren Not quite Mists, but ended extremely well
8 november 2018 - Gepubliceerd op Amazon.com
Geverifieerde aankoop
I loved, loved, loved "Mists of Avalon," as can be read in my review for that book. Hoping for the same level of storytelling and "Goddess-ness," I picked up "The Forest House." The quick summary is that "Forest House" does not have the same level of tension and intrigue that I felt "Mists" has. There were some plot points that made me wonder why they were written at all. Some character development was lush, only for those characters not to play a major part in the story. There were events that I wish were expanded greatly but were rather condensed and some events that were explained in great detail, but didn't contribute appreciably to the outcome of the story. Halfway through, I felt disappointed with "Forest House," but certainly intended to read to the end.

Having given my criticisms, there were also two parts that captured the intensity that I felt "Mists" possesses and, therefore, make "Forest House" absolutely worth reading. One was an initiation ceremony that was so beautifully done that I still think about the imagery in it. The other part is the ending - the last 30 pages or so. The tension that seemed lacking suddenly ratcheted up and the purpose of the story became clear. There is very little resolution in this story, sort of like "The Empire Strikes Back," which stands on its own as a sort of coming-of-age story, but is best seen in context of the real resolution of "The Return of the Jedi." On a grander scale, however, the ending of "Forest House" also demonstrates how the characters - all of us, really - play roles in the purpose of the Universe. The Goddess doesn't forget about us and let us founder for no reason. What seems trivial could have a far-reaching consequence, even if you don't understand it in this life. I'm currently reading "Lady of Avalon," which is showing the consequences of "Forest House" that ultimately lead into "Mists."

"The Forest House" is definitely worth reading. There is beauty in the author's writing that cannot be missed. But expect to need to read the next book for satisfaction. If you've enjoyed "Mists," seeing the story to its conclusion is the right thing to do, anyway. We could all use more Goddess in our lives.
Meer lezen
5 mensen vonden dit nuttig
Vertaal recensie in het Nederlands

Juanita Fletcher
4,0 van 5 sterren One of her classics
17 januari 2018 - Gepubliceerd op Amazon.com
Geverifieerde aankoop
This is one of Zimmer Bradley's classics that I just never got to read but with our bad weather finished it in a few days. I'm familiar with the background of the story from her works - especially the Mists of Avalon that this precedes and the works of the incomparable Morgan Llewellyn that covers much of the same subject matter. The only reason it got a 4 star instead of the 5 star is that it was somewhat predictable - and the ending too violent for my taste. But the characters are strong, for the most part well developed and relatable.
Meer lezen
7 mensen vonden dit nuttig
Vertaal recensie in het Nederlands

L. L.
5,0 van 5 sterren Excellent book, I couldn't put it down
2 mei 2017 - Gepubliceerd op Amazon.com
Geverifieerde aankoop
The history is so very well done. One can feel the blend of real history and fantasy are seamlessly combined with the real Earth-Goddess based religions of today. Excellent book, I couldn't put it down, but what else could we expect from the amazing Marion Zimmer-Bradley! As good as "The Mists of Avalon" I have a first edition....In fact, I reread them both in order again..A 10!
Meer lezen
8 mensen vonden dit nuttig
Vertaal recensie in het Nederlands

Frilleon
5,0 van 5 sterren A good backstory to Mists
2 december 2014 - Gepubliceerd op Amazon.com
Geverifieerde aankoop
I read this book after The Mists of Avalon and kind of feel that reading it first would've been better. I love the fact that it's a historically accurate fiction and you really develop care for the characters and their troubles. Every book she writes seems to end tragically and I have to say this one was quite heart breaking and left me yearning to read more of her writings, unfortunately I felt this was her last "strong" book, maybe because there is another writer involved in some of her following books. It starts a little slow, but is worth the read.
Meer lezen
18 mensen vonden dit nuttig
Vertaal recensie in het Nederlands
Ga naar Amazon.com om alle 155 recensies te bekijken 4,2 van 5 sterren
Terug naar boven
Over ons
Verkoop bij ons
We helpen je graag
© 1996-2020, Amazon.com, Inc. en dochterondernemingen