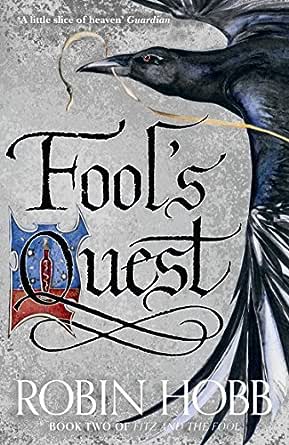 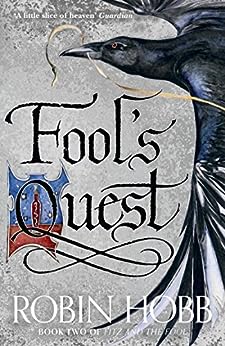 "If readers have any doubt that Robin Hobb is one of the finest writers in the fantasy genre, then they haven't read any of her work."--SFFWorld

"Hobb finds a way to always show us more details of the universe she's been building over the course of the four previous series. . . . The friendship of Fitz and the Fool brings danger to them both, but it's one of the most touching in fantasy fiction."--Library Journal (starred review)

"Fantasy as it ought to be written."--George R. R. Martin

"Hobb knows the complicated workings of the wayward human heart, and she takes time to depict them in her tale, to tell her story sweetly, insistently, compellingly. . . . A book meant to be inhabited rather than run through."--The Seattle Times

"[FitzChivalry Farseer is] one of the best characters in fantasy literature."--Fantasy Book Review

"[Hobb's] prose sparkles, her characters leap off the page."--Tordotcom

'Fantasy as it ought to be written' George R.R. Martin

Robin Hobb returns to her best loved characters with the second volume in a brand new series.

Years ago, they freed a dragon from the glaciers on Aslevjal. Then they parted ways, the Fool returning to far-off Clerres, while Fitz finally claimed a wife, a family, and a home of his own.

Now, betrayed by his own people and broken by torment, the Fool has made his way back to the Six Duchies. But as Fitz attempts to heal his old friend in Buckkeep Castle, his young daughter Bee is abducted from Withywoods by pale and mysterious raiders who leave ruin and confusion in their wake.

Fitz must find a way to rescue his beloved Bee. At the same time it is the Fool’s fiercest wish to return to Clerres with the best assassin he has ever known, to gain vengeance and justice.
Can Fitz bear to take up the tools of his old trade again, even to avenge his dearest friend and save his child?

Kriti Godey
5,0 van 5 sterren I can't not love a Fitz book
22 mei 2016 - Gepubliceerd op Amazon.com
Geverifieerde aankoop
As expected, I loved this book. It’s hard to talk about all the things Robin Hobb does right, especially because at this point, I expect her to do them right, so this is going to be a pretty short review.

We pick up right where we ended things in Fool’s Assassin, and the pacing of the first half of the book is really slow. This was a bit irritating from the plot perspective considering the cliffhanger at the end of the last book, but Hobb doesn’t waste a single word. Fitz’s usual stubbornness is tempered by a little bit of wisdom, but he’s still very much himself. The Fool’s is not really himself, which is very unpleasant to read about, but makes sense. Bee is not as much of a presence in this book, but she’s a welcome one when she does show up. There are great new characters like Ash, great old characters that I never thought I’d see again, and welcome character development for characters from the first book.

There are a few moments involving Fitz in this book that I never really expected to happen, and some loose ends from the original Farseer trilogy are wrapped up. The last few chapters of the book are especially exciting for those of us who love the whole Realm of the Elderlings universe. All these good things make me scared for Fitz’s fate in the third book (especially as the book is called Asssassin’s Fate, and Robin Hobb doesn’t have a history of leaving her characters happy) but otherwise, I was thrilled.

I really don’t want to wait until this time next year to find out what happens next.

KatPiper
5,0 van 5 sterren Totally Blew Me Away!
28 oktober 2018 - Gepubliceerd op Amazon.com
Geverifieerde aankoop
I am totally blown away by Robin Hobb's writing! She has created a total world filled with the most fascinating characters--humans and elderlings and dragons, kings and queens and princes... and magic. Especially magic. Such incredible magical powers! Reading these books, I travel to the most fantastic places and meet the most fascinating characters. I can only describe the experience as transformative and powerful and oh, so addicting.

In this, the second book of the Fitz and the Fool trilogy, we find our hero, Fitz, back in Buckkeep Castle, as he tries to nurse the Fool back to health after having been tortured by the Servants, a mysterious group who have colluded with the evil Chalcedeans to capture the singular person whose dreams can foretell he future. They have determined that Bee, the young daughter of Fitz and the now deceased Molly, is the "unacknowledged son" they seek. (Why they think Bee is a boy, I do not yet know. But genders do tend to merge and change in some characters of this series.) We readers share the abject devastation, anger and desire for revenge that Fitz and the rest of the Farseer royalty feel when they discover the destruction of Withywoods, the slaughter of most of that household and especially the abduction of Bee and her cousin, Shun.

The perilous adventure that Fitz embarks upon to revenge what he believes to be Bee's death is absolutely riveting, especially when he is joined by the Fool and a small, but mainly untrained entourage. I was spellbound right up to the thrilling but frightening cliffhanger at the end of the book.

I may be reading too much into the storyline, but I definitely felt there were some Christian overtones here, which I quite enjoyed. For example, when "wolf father" speaks to warn Bee, it seems like the voice of the Holy Spirit, or perhaps a guardian angel. And when Fitz is filled with the Skill stream (again, Holy Spirit?) and is able to heal the young elderling prince, and then he is mobbed by a large group of elderlings begging to be healed, much like the stories of Jesus' healings in the Gospels. And when the demands of the crowd become too excessive, Fitz is physically and mentally overwhelmed, reminiscent of a scene in Andrew Lloyd Weber's "Jesus Christ Superstar". But I digress.

I am eagerly anticipating reading the third book of this series. That particular pleasure will have to wait a few weeks while I try to catch up on my book club reading. I can't help but wonder, though, why there hasn't been a series of feature length movies based on these stories. What an amazing blockbuster that would (will?) be! It could rival or even surpass Star Wars, Lord of the Rings and Harry Potter combined. Oh, the po$$ibilitie$...
Meer lezen
Een iemand vond dit nuttig
Vertaal recensie in het Nederlands

Kindle Customer
3,0 van 5 sterren Meat-headed Fitz refuses to cooperate.
7 januari 2017 - Gepubliceerd op Amazon.com
Geverifieerde aankoop
I've been voraciously devouring this trilogy. The books can be frustrating at times particularly this one because it delays so much. I want to find out what happens with Bee but instead get pages upon pages about food, clothing, baths, and Fitz's meat-headed inability to cooperate with his family and friends. I almost set it asside as once again he refused to plan or to cooperate with them. Sigh. That's Fitz. On to the next in the series.
Meer lezen
7 mensen vonden dit nuttig
Vertaal recensie in het Nederlands

monesqe
5,0 van 5 sterren Back in form, excited again
30 mei 2019 - Gepubliceerd op Amazon.com
Geverifieerde aankoop
When I read Book 1, I had mixed feelings. It was great to see old friends on a new adventure, but the book was overlong and its plot line was too modest for a book that long. I.e., nothing much happened. It was a fairly simple setup for the next two books--and it took hundreds and hundreds of pages to get there. What happened? (Spoilers, but these are pretty obvious and since this is on a Book 2 review....) Molly dies. Bee is taken, hints of the Fool occur. At half the length, it could have been as good. At two-thirds, maybe fine. But as it was, it dragged too often. I never felt like skimming a Robin Hobb book before, but I was close. The familiar and excellent prose style was there, the great characters, the world building--but it seemed like the plot line got lost and became an afterthought. It became a little tedious--not normally my reaction to a Robin Hobb book.

Here, all that is rectified. World building, skill with prose and characters all remain great. However, now there's actually a plot that moves and moves in a direction. The pages turn. There are episodes of detail--but now it feels like fleshing out scenes for a great plot rather than an end unto itself. It's exciting again. I couldn't put it down. I'm about half way through Book 3, and just as psyched.
Meer lezen
Vertaal recensie in het Nederlands
Ga naar Amazon.com om alle 965 recensies te bekijken 4,8 van 5 sterren
Terug naar boven
Over ons
Verkoop bij ons
We helpen je graag
© 1996-2020, Amazon.com, Inc. en dochterondernemingen