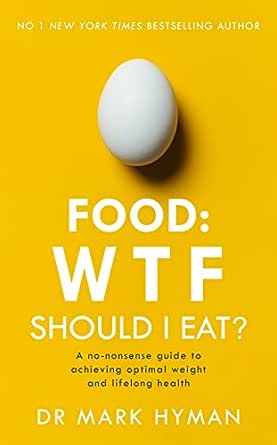 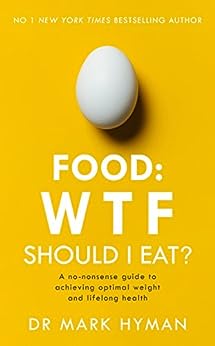 Are you confused about whether to go pegan, paleo, ketogenic or vegan? No 1 New York Times bestselling author Dr Mark Hyman sorts through the conflicting research on food to give us the truth on what we should be eating and why.

Did you know that porridge isn't actually a healthy way to start the day? That perhaps you should be eating a Mediterranean diet? And that milk doesn't build bones, and eggs aren't the devil? In WTF Should I eat? - Dr Hyman looks at every food group and explains what we've gotten wrong, revealing which foods nurture our health and which pose a threat. He also explains the crucial role food plays in functional medicine and how food systems and policies affect our environmental and personal health.

With myth-busting insights, easy-to-understand science, and delicious, wholesome recipes in every chapter, WTF Should I Eat? is an invaluable resource for cooking, eating and living well.

'Dr Mark Hyman's WTF Should I Eat? offers a masterpiece of truth-telling, a subversive reproach to the industrial systems that threaten our very health - and how each of us can flourish by making better food choices. This could be the most useful book you will read.' - Daniel Goleman

'I find that many people are confused about what constitutes a healthy diet. Food: WTF Should I Eat? is an easy to follow guide to the foods that harm us and the foods that heal us. If you want to take all of the guesswork out of eating a real, whole foods diet, read this book! - Dr. Rangan Chatterjee

First off, I am a fan of Dr. Hyman. I think this book is well done and very informative, especially if you are new to reading about nutrition or current scientific findings on the subject. I do think it’s worth noting his diet is more along the lines of Paleo, so if you’re vegan you won’t like this book. Many times he states the pitfalls of vegan diets but he does talk extensively on the importance of vegetables. Most, if not all, of this information is available on his social media or through other paleo/Whole food blogs. Lastly, he contradicts some times. For example, stating you need 30g of protein 3x a day but then saying he only eats meat as a condiment, legumes rarely and plants should be 50-75% of our plate. I find it difficult to eat this much protein if limiting both legumes and meat and also focusing on low carb vegetables. Another example is the back and forth on beans in general, one paragraph they’re packed with nutrients, another paragraph they’re anti-nutrient and off just full of too many carbs. Another example, dairy: he goes back and forth on the pros and cons so much that you’re left still not knowing if you should eat it.

So that’s why I took off two stars: info already available online and it’s conflicting at times. Otherwise, it’s well done.
I recommend it if you aren’t vegan and if you are absolutely in the dark on current nutrition/food quality.

Smart Shopper!
3,0 van 5 sterren Riddled with bias and confusion
22 mei 2018 - Gepubliceerd op Amazon.com
Geverifieerde aankoop
I have mixed thoughts on the quality of this book. For starters, I have been researching about nutrition for years now and just recently stumbled on Dr. Hyman and his methodology. I am also studying in medical school right now, so I feel I have some credibility when talking about this stuff. Let's start with the good points.

This book is a great guide for those who are just starting out. It can be a bit overwhelming if you don't know a lot of it, but he does a good job of making you realize that there are a lot of problems with the conventional American diet, especially the foods that the media and lobbying industries are marketing towards us. His biggest pro is the fact that he is preaching on many topics that have been (in my opinion) firmly established in the literature already. For instance, unnatural carbs (ex. grains, processed foods, etc.) are NOT needed at all, so avoiding these makes obvious sense. This is why diets like keto are so popular right now; people are ridding themselves of mostly carbs, which in turn drastically cuts down on the amount of calories one eats each day. Generally, he does a good job addressing the major food groups and gives a nice, easily-accessible list at the end of each chapter on what foods to avoid and to get more of. In a world of confusion on what to eat, Dr. Hyman does a nice job of mapping out a starting point by which to become healthier and more vibrant. Some of the main takeaways I got from his book are that organic/minimally processed foods are best (mostly because of the added chemicals in our foods); the messages by the government are very biased; and that moderation really is the key to a healthy lifestyle.

I do, however, have quite a lot of gripes with his content.

His book reeks of confirmation bias. I'm guessing that he selectively included studies from authors who he works with regularly to fit the narrative he wants to advocate. Obviously this happens with any writer, but it's a problem when someone writes a no-nonsense guide to eating healthy and only includes information on the bias he has. The reality is that nutrition information is not set in stone, and many of the topics he talks about are non conclusive enough to give an affirmative answer. Some of the examples include:

1) Dairy: His main arguments for not consuming milk are that it's inflammatory and that it leads to cancer. For me, I don't have issues with digesting dairy at all, so that part of his argument is thrown out immediately. Second, his argument that dairy leads to cancer is non-conclusive. He pretty much says that research suggests there is a link between dairy and cancer, but that could be said for so many things. He doesn't mention much about the benefits of dairy, including its protein content, natural sugars, healthy fats and vitamins, etc. Long story short, he doesn't comprehensively convince me that dairy should be avoided. Yes, I will try to go organic when I can, but organic dairy is four times as expensive as non-organic dairy.

2) Beans: His main arguments for avoiding beans is that they are inflammatory and have high carbohydrates contents. Yes, these probably should be avoided if you're diabetic or insulin-resistant (as should most carbs in that case). However, once again I don't have issues digesting beans, and I find that their fiber content is world's better than any other foods I eat. One serving of beans makes me regular for days. Apart from incredible amounts of fiber, beans have lots of protein, micronutrients, and are very satiating. What about the difference between canned beans and dry beans?

3) Grains: His main argument for avoiding grains are that they are just like sugar when digested. Yes, this is true. However, what about whole grains? He doesn't talk enough about the difference between whole grains and highly processed grains. This makes it difficult to make a decision---should I avoid grains altogether or just processed ones?

Overall, his main weakness is that what he says isn't clearly convincing. Yes, I will try to buy organic foods when possible and yes I will try to limit the carbs I consume. However, I don't know necessarily what ultimate decision to make. These foods exist on a spectrum (ex. juice vs. natural fruit, ice cream vs. whole milk, etc.) What should I do? Furthermore, the type of diet he advocates is far out of reach for most people in society. It's just too expensive and not convenient in the slightest. This book will absolutely help those who are eating only junk food, but it isn't necessarily helpful for those are in-shape, workout regularly, don't have the money and/or time, and want to live a moderate lifestyle. I wish he had spent more time telling me about the complete pros and cons of each food group and allowing me to make a decision on my own, but instead he picks a side (ex. beans are mostly bad) and goes with that one side. A good researcher discusses both sides on a topic, but unfortunately Dr. Hyman chose to ignore some of the information that would have weakened his arguments and bias.
Meer lezen
598 mensen vonden dit nuttig
Vertaal recensie in het Nederlands

TB
1,0 van 5 sterren Would Love to Send it Back- Don't Waste Your Money! 👎
9 februari 2019 - Gepubliceerd op Amazon.com
Geverifieerde aankoop
Saw him on tv. Book doesn't really give you more info. than watching his video's. Not a realistic life plan. He's also obsessed with bashing Trump, and inserting his liberal agenda. Don't care to hear any political rhetoric, it's suppose to be about food!!
Meer lezen
186 mensen vonden dit nuttig
Vertaal recensie in het Nederlands

Nanc
5,0 van 5 sterren Registered Dietitian-approved 👍🏼👍🏼
7 maart 2018 - Gepubliceerd op Amazon.com
Geverifieerde aankoop
Dr Mark Hyman is one of the few consistently accurate experts on evidence-based nutrition, who is a badly needed, fearlessly strong, voice against Big Food. And an even stronger voice advocating for the health of our country. I trust him because he does not shill fake information to make money. He is not a sell out. He’s the real deal.

His evidence-based reference section is 30 pages long, & about 19 references per page. Perfect for arguing science to those who insist that reading only headlines, & social media, are accurate sources of nutrition information.

It is clearly indexed on 12 specific food groups (meat, poultry/eggs, milk/dairy, fish/seafood, vegetables, fruit, fats/oils, beans, grains, nuts/seeds, sugar/sweeteners & beverages). In each food group he discusses the science, what the experts got right & wrong about the food group, what we still don’t know for sure, things you should know about the food group & what you should eat/avoid in that food group.

After those sections, he further patiently spells out what to keep out of your food. In case you haven’t already gotten the idea in Part II.

I pre-ordered & got the book the day it dropped. Already I’ve highlighted & bookmarked half of it. I used it today @ work, while teaching my diabetes class, to answer a question about raw milk (p. 89).

Dr. Hyman, thank you for another great book. You keep out-doing yourself. And I use your Blood Sugar Solution recipes weekly.
Meer lezen
358 mensen vonden dit nuttig
Vertaal recensie in het Nederlands

J. E. Bonarski
5,0 van 5 sterren The subtitle says it plain: What the heck should i eat ...and he tells you
28 februari 2018 - Gepubliceerd op Amazon.com
Geverifieerde aankoop
Dr. Hyman doesn’t pull any punches when he talks about what Big Food has done to our food. His outrage is clear and I share it. This book is straight forward as he analyzes each food group telling us how we got so much so,wrong. When I finish reading about each food group I know what to avoid and what to eat. Best nutrition book I’ve ever read and I have a few in my bookcase.
Meer lezen
224 mensen vonden dit nuttig
Vertaal recensie in het Nederlands
Ga naar Amazon.com om alle 679 recensies te bekijken 4,6 van 5 sterren
Terug naar boven
Over ons
Verkoop bij ons
We helpen je graag
© 1996-2020, Amazon.com, Inc. en dochterondernemingen