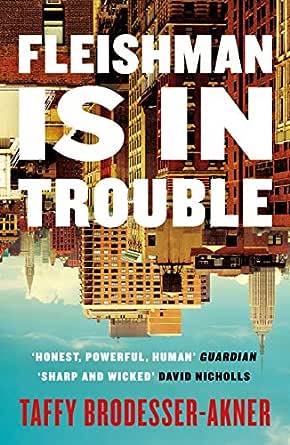 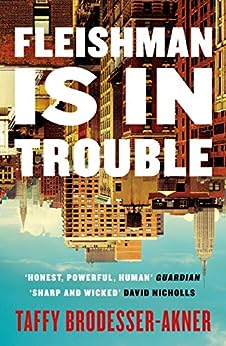 Fleishman Is in Trouble: Longlisted for the Women's Prize for Fiction 2020 (English Edition) Kindle-editie

"This glorious debut has the humor of Maria Semple, the heart of Meg Wolitzer, the lustiness of Philip Roth, and a voice that is pure. It's wild and wonderful and goes in so many directions, each with profundity--my favorite thing that novels can do. How does one's favorite journalist become one's new favorite novelist? With this book."--Emma Straub

"When his ex drops the kids off and doesn't come back, a father of two revisits the choices that led to this moment. He searches for answers, hilariously and heartbreakingly avoiding the darkest questions. Brodesser-Akner's debut is a referendum on marriage, friendship, and how we live (and love) right now."--People "Whip-smart, gleefully scatological . . . [Brodesser-Akner] aims a perfect gimlet eye at the city's relentless self-regard. . . . But her best trick may be the novel's narrator: An elusive presence identified at first only as an old friend of Toby's from their study-abroad days, she turns out to be both the book's Trojan horse and--in a brilliant third-act pivot--its greatest gift, transforming a fizzy comedy of manners into something genuinely, unexpectedly profound."--Entertainment Weekly "Many novelists have written excellent fictional indictments of interpersonal and systemic sexism. Not since Teju Cole's Open City--a very different book in all other respects--has a novelist put the reader on the wrong side the way Brodesser-Akner does. To do so, she uses a lot of intelligence, a lot of anger, a great sense of humor and a whole new variation on the magic we know from her magazine work. The result is a maddening, unsettling masterpiece, and, yes, you will be moved and inexplicably grateful at the end."--NPR "In her witty and well-observed debut, Taffy Brodesser-Akner updates the miserable-matrimony novel, dropping it squarely in our times. . . . Brodesser-Akner has written a potent, upsetting and satisfying novel, illustrating how the marital pledge--build our life together--overlooks a key fact: There are two lives."--The New York Times Book Review "Electric . . . Brodesser-Akner's first foray into fiction--set in Manhattan, the Hamptons, and Israel--is funny, stylish, and insightful, whether describing men's challenged communication skills or the knife juggler's agility required to maintain a modern marriage."--O: The Oprah Magazine "Taffy Brodesser-Akner's sharp debut novel is packed with humor and heart. In it, the titular trouble begins when Toby Fleishman realizes that Rachel--his wife of 15 years, from whom he's now separated--is missing. Where has she gone, and why? This book will have you racing through the pages to find the answers."--Southern Living "Everything you could wish for in a satisfying summer read . . . Taffy Brodesser-Akner's page-turner doubles as a satirical take on modern relationships."--Women's Health

'This is the novel of the summer . . . There is no one that this book isn't for. I can't believe it's a first novel. Pure brilliance' INDIA KNIGHT, THE SUNDAY TIMES

'Could be one of the books of my entire lifetime. I've never felt so seen' GRACE DENT, GUARDIAN

'Sharp and wicked, insightful and funny, and then suddenly so touching' DAVID NICHOLLS

'This book is a work of utter perfection' ELIZABETH GILBERT

Finally free from his nightmare marriage, Toby Fleishman is ready for a life of online dating and weekend-only parental duties. But as he optimistically looks to a future that is wildly different from the one he imagined, his life turns upside-down as his ex-wife, Rachel, suddenly disappears.

While Toby tries to find out what happened - juggling work, kids and his new, app-assisted sexual popularity - his tidy narrative of a spurned husband is his sole consolation. But if he ever wants to really understand where Rachel went and what really happened to his marriage, he is going to have to consider that he might not have seen it all that clearly in the first place . . .

A BLISTERING SATIRICAL NOVEL ABOUT MARRIAGE, DIVORCE AND MODERN RELATIONSHIPS, BY ONE OF THE MOST EXCITING NEW VOICES IN AMERICAN FICTION

'The most astonishingly brilliant Trojan horse of a novel' DOLLY ALDERTON

'Brimming with wisdom and utterly of this moment . . . Taffy Brodesser-Akner's debut is that rare and delicious treat: a page turner with heft' MARIA SEMPLE

'It is a Great Novel . . . It has depth, wit, nuance and life. Heartbreaking and funny' NIGELLA LAWSON

David Kaufman
5,0 van 5 sterren Far more complex than it first may seem.
20 juni 2019 - Gepubliceerd op Amazon.com
Geverifieerde aankoop
Looking at the more negative reviews, I've noticed a common thread; they all stopped reading the book, and as a result missed what made the book great.

The author's writing style is quite narrative in nature and she's funny. Because of that, it might appear from the early parts of the novel that it is simply a sort of "slice of life" thing highlighting Fleishman's newly hedonistic life that he gets to enjoy while simultaneously able to clearly paint his wife as the villain. That is merely, however, the setup for a much more complex work that deals with marriage, roles, sex, gender and wealth in society, together with the pressures of each. The apparent simplicity of the early parts of the novel create an environment that makes the continuation of the story considerably stronger, and it is to the authors CREDIT, not DETRIMENT that the reader is led down the path that was criticized by those who failed to complete the journey.

By knocking off reading when they did, these reviewers cheated themselves out of the big payoff, and I encourage them to pick the book up again and trust a little bit.

Bonnie Brody
2,0 van 5 sterren Oy Vey, What a Mish Mash
4 april 2019 - Gepubliceerd op Amazon.com
Vine-klantenrecensie van gratis product( Wat is dit? )
Toby Fleishman is a 41 year old jewish doctor, 5'5" tall, and sort of a shlemiel. He is soon to be divorced from Rachel, the wife of his nightmares. Despite earning close to $300,000 annually, he wears frayed shirts and feels like he's poor compared to his neighbors on the Upper East Side. He has two children and is trying to have a productive social life (sex and more sex) but Rachel doesn't adhere to the separation agreement and drops the kids off at any old time, even the middle of the might.

I had high expectations for this book and anticipated a 'Jonathon Tropper' or Philip Roth type experience. However, for want of a better description, it is boring and redundant. There were only so many times I wanted to hear about Toby's internet sexting experiences, the 'visuals' he loved on dating sites, and his desire to have a second chance at life. The book read like 'Sex and the City', with each episode being the same one. By page 100 I stifled a yawn and decided not to finish the book. I have a 75 page rule, meaning I quit a book after 75 pages if it doesn't grab me, but I extended my reading an extra 25 pages.

What was also annoying about this novel other than the repetition, was that it is told from different people's perspectives. I had trouble identifying who was talking or whether it was Toby in first person. Sometimes the book slipped into third person, like when Toby reminisces about meeting Rachel, and there seemed to be no special point to this confusing chorus.

If you want a book to read on the plane or at the beach, and you think you'd enjoy 'Sex and the City' with a definitively jewish bent, this book might resonate with you.
Meer lezen
217 mensen vonden dit nuttig
Vertaal recensie in het Nederlands

SW
3,0 van 5 sterren Moments of Greatness Can't Overcome Convoluted Styling
20 mei 2019 - Gepubliceerd op Amazon.com
Vine-klantenrecensie van gratis product( Wat is dit? )
A lot of pre-release praise has been heaped on this one and, while I don’t think it’s bad, per se, I admit to being baffled by the boffo word of mouth.

It’s very, VERY navel gaze-y (eye-rollingly so) and at least 100 pages overlong. So much could have been snipped to not only speed up the story’s early glacial pace, but clarify and condense the meandering narrative. And while I think a lot of that rambling pace is very much intentional, and designed to set a mood, even then there’s way too much of it. Too many times I’m taken out of the story to think about who this name belongs to, or if we’ve met this character before, or who it is who is telling this section of the story.

While I think Brodesser-Akner is a deft celebrity profile writer, she seems to be overly in love with every single syllable of the prose in this, her first novel. Long-winded turns of phrase and superfluous paragraphs—frequently multiple pages full—of description abound. Characters come and go, and while it’s not incredibly hard to follow, it’s disorienting in a way that adds nothing to the narrative. The various first-person, second-person and third-person shifting styles aren’t used very well, in my opinion, as they come and go randomly. It’s possible that’s, again, by design, to add a sense of disorientation, but even if so, I can’t help but come back to the fact that it just doesn’t work all that well, especially as much of the story is already told through daydreams, digressions and occasional flashbacks.

Despite all the density, the core characters—with the exception of Fleishman himself and perhaps his two children—are woefully under-developed. His college friends Seth and Libby come and go with the author seeming to think the reader knows them as well as Fleishman does, even though we haven’t been given the context to do so. Libby, who is ostensibly the narrator of this tale, and as a magazine writer one must presume at least partially the author’s avatar, disappears for the first half of the book after a chapter or two, and it’s absolutely jarring when she returns, seemingly out of nowhere, and then is suddenly much more present for the latter half of the novel.

The story also didn’t live up to its core promise to be about many types of modern marriage…Instead, it’s just about one—the extremely unhappy kind. The stories are all very much the same, just at different stages of distress. It’s very much a story of ennui at best, and outright misery at worst, as if those are the only points on the scale for people of a certain age. It definitely works to invoke a low-level depressive atmosphere, which is clearly absolutely intentional, but it didn’t strike me as especially smart (clanging repetitiveness of much of the telling + disorganized perspectives), or at all funny.

It occasionally comes close to compelling, but it’s definitely not a fun read, by any definition of the word. There’s good stuff here, but it’s a book I finished feeling like it could have been significantly improved via an editor’s extremely strong hand.
Meer lezen
169 mensen vonden dit nuttig
Vertaal recensie in het Nederlands

Janis G.
1,0 van 5 sterren Confusing and boring.
28 juni 2019 - Gepubliceerd op Amazon.com
Geverifieerde aankoop
I hated this book. I don’t understand all the hype. Just reading toby’s obsession with his sex apps was boring. It just goes on and on. This book is about so many self absorbed people who just whine their day away. I just wanted to slap each character.
Meer lezen
95 mensen vonden dit nuttig
Vertaal recensie in het Nederlands

It’s a bunch of things I don’t normally like - New York, a white man’s midlife crisis and sexual awakening, but she’s such an amazing writer she pulls it off.

There are a few twists so I won’t say more about the plot. They’re not Gone Girl-style twists, just turns in perspective that made me want to re-read the whole thing with a different understanding.