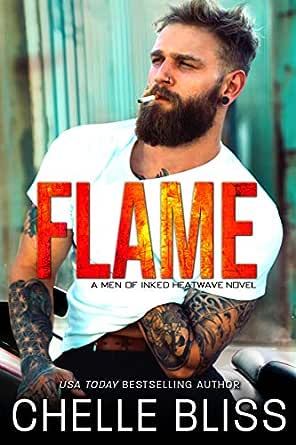 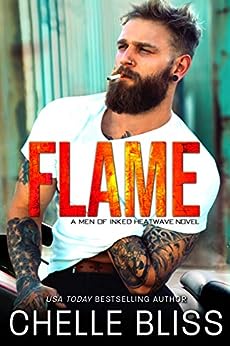 Could you love a man surrounded by danger?

Gigi Gallo’s childhood was filled with the roar of a motorcycle and the hum of a tattoo gun. Fresh out of college, she’s about to start working at her family’s tattoo studio — Inked. But when she showed up the first day, she never expected to run into someone tall, dark, and totally sexy from her not-so-innocent past.

Pike Moore is a bossy biker with a cocky attitude and an even bigger ego. He came to Inked to start over. New town. New job. New roots. None of that included coming face-to-face with the hot chick who spent a week in his bed before she vanished without a trace.

But when Pike’s dark family history catches up with him, can he stop Gigi from being caught in the crossfire?

The first of the Gallos, City (Joe), is who we met way back in 2014!! City and Suzy and the Men of Inked series has always been one of my favorites - I'm not quite sure how many times I've read each of these books!

Well now we're watching Gigi, Joe and Suzy's oldest, grow up right before our eyes. And I LOVED Gigi and Pike!! They are definitely 'Gallo-Worthy'!
And to top everything off, we get to see all the Gallos and their significant others - what a treat.

GiGi is her father and mother all rolled into one amazing package. She's brash, she's loyal, she's hilarious, and she doesn't settle...she has a plan and she'll do what needs to be done to get there. One very large blip on her radar is the time she spends with Pike during Bike Week (Izzy much?)!!

Just as all of GiGi's plans come together, there's Pike right in the middle of everything! Oh yeah, City does NOT like 'seeing himself' in Pike!!

This is another journey into Gallo world and I'm all in for the ride! Absolutely Awesome!

Amazon Customer
2,0 van 5 sterren SMH
18 september 2019 - Gepubliceerd op Amazon.com
Geverifieerde aankoop
I love Chelle Bliss and have followed the Gallo Family series with each new release. I have to say I was a bit disappointed this time around. The author is usually pretty reliable to create a naughty-grab-your-husband-tonight book. This one fell short. Like there were chapters missing. At the end of Chapter 21 the naughtiness starts and then poof! Pike is now at the bar. WTF? Seems like all the good naughty authors are following this pattern. I don't know if it's Amazon saying too much or whatever? Bring me back Ellora's Cave!!!!
Meer lezen
6 mensen vonden dit nuttig
Vertaal recensie in het Nederlands

Lisa(New Hampshire)
5,0 van 5 sterren "I'd give anything to have just a small sliver of that goodness in my life."
17 september 2019 - Gepubliceerd op Amazon.com
Geverifieerde aankoop
The first book I ever read by Chelle Bliss was “Throttle Me.” I fell in love with City and Suzy, and it has always been one of my favorites. I was ecstatic to learn that she was writing a new series, with the first book featuring their daughter, Gigi.

I read “Flame” during a long car ride and I am glad I was able to devote all of my time to this masterpiece. Gigi’s feistiness reminded me of Suzy and Pike is a carbon copy of City. Gigi was determined to meet Pike when she first saw him and she had no qualms about walking right up to him and letting him know she was interested. I was drawn into the curiosity they had for each other and I applauded Pike’s restraint when it came to taking his time get Gigi. The intensity of their connection never lessened and when they were reunited, it was like they had never been apart.

The Gallo family and the bond they have with each other is one of the reasons I love this series so much. To them, family is everything, and you always have someone to protect you, listen to you and a place to call home. Pike found this with Gigi, and it was magical, deeply personal and life changing. I can’t wait to see what the future has in store for Pike and Gigi in “Burn”, the next book in the series.
Meer lezen
3 mensen vonden dit nuttig
Vertaal recensie in het Nederlands

Fs
1,0 van 5 sterren 1 star
2 oktober 2019 - Gepubliceerd op Amazon.com
Geverifieerde aankoop
The first book I read by this author was Enshrine. I enjoyed that book. I also read Hook by this writer. It was not a story I would usually like but I liked the characters and I was never bored. I knew after several chapters this would be a loser. The female character was too immature and uninteresting. I am not a fan of YA books. In order for me to enjoy one they have to be special and this one was not special. I would never recommend this book.
Meer lezen
3 mensen vonden dit nuttig
Vertaal recensie in het Nederlands

Cheryl
5,0 van 5 sterren So good!
17 september 2019 - Gepubliceerd op Amazon.com
Geverifieerde aankoop
Once I started this book I didn’t want to put it down. Pike and Gigi kept me entertained from the very start. As I read the book, I had flashbacks to the original Inked crew- specifically Gigi’s dad, City (Joe Gallo) and her aunt Izzy.
I loved the chemistry between Pike and Gigi, and Pike’s Tennessee accent slipping in there when he calls her “Darlin” just melts me. This book ends on a bit of a cliff hanger and I’m (im)patiently waiting for the next book. Just when I thought this couple was on their way to their HEA, someone else shows up to try and throw a wrench in their plans.
Meer lezen
2 mensen vonden dit nuttig
Vertaal recensie in het Nederlands
Ga naar Amazon.com om alle 310 recensies te bekijken 4,8 van 5 sterren
Terug naar boven
Over ons
Verkoop bij ons
We helpen je graag
© 1996-2020, Amazon.com, Inc. en dochterondernemingen