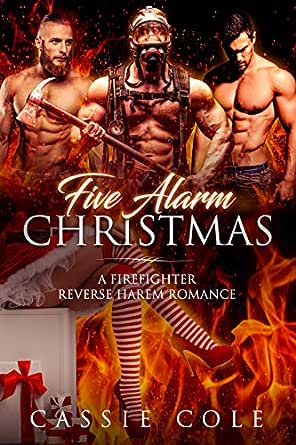 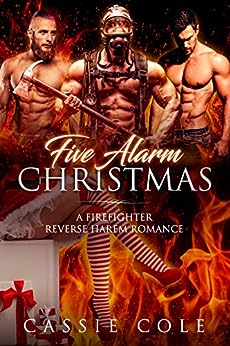 Don’t sleep with your teammates.
It was the one rule they emphasized to us ladies at the Fire Academy. The kind of rule that existed for a crucial reason.
And it was an easy rule to follow… Until I got transferred to Miami Fire Station 47.

With just two weeks until Christmas, Firefighter Amy Pederson is transferred to a special new fire station in the suburbs of Miami. It’s a tremendous honor to have been selected out of hundreds of applicants, but Amy can’t help but feel like she doesn’t belong.

And it only gets worse when she meets her three sexy unit mates, some of whom aren’t too thrilled to have a woman on their team.

Yet as they take holiday calls together they begin bonding in ways only a close-knit group who risk their lives together can. Every time they throw on their gear and stride into the swirling smoke their petty differences seem silly by comparison—especially with rumors of a holiday arsonist plaguing Miami.

But now Amy has the opposite problem: she and her new unit mates are beginning to like each other too much, a temptation that’s impossible to avoid while living with three delicious firefighter hunks. Can Amy douse her unrelenting feelings while searching for the arsonist, or will everything go up in smoke?

Gea
5,0 van 5 sterren Exhilarating
6 december 2018
Indeling: Kindle-editie
This firefighter story kept me on the edge of my seat.
Immediately intrigued by Sparks his reasons for keeping a distance, while reading on it just got better and better!
Loved that Amy was physically so strong that she had few problems fitting in. Well it certainly helped that she doesn’t like drama and isn’t a girly girl.
I can relate to that.
She is witty too!
A worthwhile Christmas read!

Annie K 69
5,0 van 5 sterren Loved it, great holiday romantic drama
14 februari 2019 - Gepubliceerd op Amazon.com
Indeling: Kindle-editieGeverifieerde aankoop
Amy has always wanted to be a fire fighter and worked hard for her dream. She graduated from the academy an even landed a job working with town of her best friends. A promotion has her starting over at a new station, designed to support the surrounding stations at peak times.
Christian, Sparks, and Angel just got a promotion to the new support station, leaving their forth teammate behind. Sparks doesn't take it well.
Amy and her new teammates get off to a rough start Christian is friendly, Angel is distant but is at least cordial, Sparks is out right hostile. Amy struggled to find a.place in her new team. She is tough and determined. She is also struggling with the attraction she feels for then. Her old team were like brothers. Christian, Angel and even Sparks are.hot man candy.
It doesn't take long for Amy to find Christian and Angle feel the same. Sparks remains distant and hostile. A chance meeting a a salsa club changes that.
The four develop a close working and personal relationship. They are teammates, friends and lovers. When Amy is in danger her men will risk their love and careers to save her.
A fast paced and steamy romantic drama. MFM with no MM.

Tracie Leland
1,0 van 5 sterren Just no
4 augustus 2019 - Gepubliceerd op Amazon.com
Indeling: Kindle-editieGeverifieerde aankoop
I had a really hard time getting into this story and when I found I was forcing myself to finish it, just no. As a former female firefighter I couldn’t believe the number of bonehead decisions being made. Sparks is a butthurt D and seems like a petulant whiny child and his two “friends” are d-bags letting him get away with it. Then with all of her “strong-Female Character” stuff she caves to having sex with the first guy who is nice to her...on day one...like that isn’t going to set the station up for failure. I read other comments that stated that there was no communication, no true relating, and just filler between sex scenes. Unfortunately I can’t speak to that because I refused to continue. I loved the concept but ick.
Meer lezen
2 mensen vonden dit nuttig
Vertaal recensie in het Nederlands

Kestarah
5,0 van 5 sterren New girl in the fire house!
3 januari 2019 - Gepubliceerd op Amazon.com
Indeling: Kindle-editieGeverifieerde aankoop
I loved this book. I couldn’t put it down. My other half reminded me that I needed to get some sleep so I could function at work in four hours.

Amy was moved from a familiar firehouse she had worked at since graduating from the fire academy. Sparks, Angel, and Christian came from the same firehouse, but had to leave behind their fourth, Brody. They were determined to get him assigned to their firehouse by making Amy’s life a nightmare. They ignored her. Played video games very loudly. They pretended that she wasn’t there. Slowly she won them over by first proving that she was more than the token female in the firehouse and could cook up a storm to put delicious food in their stomachs. But their work relationship changed. The guys realized that Brody wouldn’t be assigned with them after she resigned and talked to him about the changes that Brody decided to make in his life.

TrilogyFreak
5,0 van 5 sterren Holy Hot Firemen!
7 januari 2020 - Gepubliceerd op Amazon.com
Indeling: Kindle-editieGeverifieerde aankoop
I was blown away by how much I loved this one. I was literally up all night reading it. This one, along with Christmas Package, are my top two favorites by Cole! I loved the tension in this one. As always, Cole has a GREAT story that takes precedence over the romance. Lots of conflict between two of the characters and of course, the adventure of fighting fires in Miami, Florida and trying to stop a serial arsonist. These characters were wonderful. Sparks is my favorite! And I absolutely loved a female firefighter. Strong women are my jam in books!

I've read reviews stating some things that were "unrealistic," but this is romance. The immediate attraction is a common theme in romance...even when the characters are firemen/women! And sure...in real life, they wouldn't jump into bed the first day on the job. But this is romance!!

Irene Talbert
5,0 van 5 sterren LOVE THIS BOOK....
3 januari 2019 - Gepubliceerd op Amazon.com
Indeling: Kindle-editieGeverifieerde aankoop
This is a fast-paced and standalone book that will keep you engaged from start to finish. There's action, adventure, drama, danger, suspense, twist/turns, enemies, survival, intrigue, humor, mystery/secrets, surprises, friends, conflict, resolution, romance, passion/lust and love.
The blurb about this book adequately describes what happens in the story and I won't bore you with a detailed description of the book. All I can say is that if you love books about sexy men then you need to read this book.
Can't wait to read the next book by this author. I voluntarily reviewed this book and this review is my own opinion.
Meer lezen
Een iemand vond dit nuttig
Vertaal recensie in het Nederlands
Ga naar Amazon.com om alle 219 recensies te bekijken 4,4 van 5 sterren
Terug naar boven
Over ons
Verkoop bij ons
We helpen je graag
© 1996-2020, Amazon.com, Inc. en dochterondernemingen