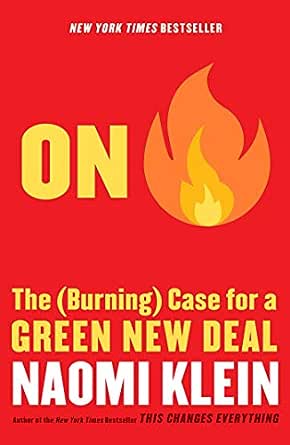 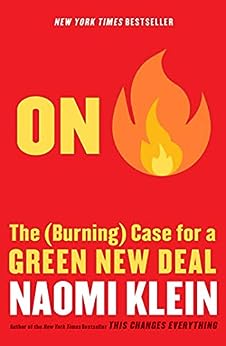 On Fire: The (Burning) Case for a Green New Deal (English Edition) Kindle-editie

#1 international and New York Times bestselling author Naomi Klein, author of The Shock Doctrine and This Changes Everything, makes the case for a Green New Deal—explaining how bold climate action can be a blueprint for a just and thriving society.

For more than twenty years, Naomi Klein has been the foremost chronicler of the economic war waged on both people and planet—and an unapologetic champion of a sweeping environmental agenda with justice at its center. In lucid, elegant dispatches from the frontlines of contemporary natural disaster, she pens surging, indispensable essays for a wide public: prescient advisories and dire warnings of what future awaits us if we refuse to act, as well as hopeful glimpses of a far better future. On Fire: The (Burning) Case for a Green New Deal gathers for the first time more than a decade of her impassioned writing, and pairs it with new material on the staggeringly high stakes of our immediate political and economic choices.

These long-form essays show Klein at her most prophetic and philosophical, investigating the climate crisis not only as a profound political challenge but as a spiritual and imaginative one, as well. Delving into topics ranging from the clash between ecological time and our culture of “perpetual now,” to the soaring history of humans changing and evolving rapidly in the face of grave threats, to rising white supremacy and fortressed borders as a form of “climate barbarism,” this is a rousing call to action for a planet on the brink.

With reports spanning from the ghostly Great Barrier Reef, to the annual smoke-choked skies of the Pacific Northwest, to post-hurricane Puerto Rico, to a Vatican attempting an unprecedented “ecological conversion,” Klein makes the case that we will rise to the existential challenge of climate change only if we are willing to transform the systems that produced this crisis.

An expansive, far-ranging exploration that sees the battle for a greener world as indistinguishable from the fight for our lives, On Fire captures the burning urgency of the climate crisis, as well as the fiery energy of a rising political movement demanding a catalytic Green New Deal.

The fight for a green world is the fight of our lives. And with On Fire, Naomi Klein gives us the ammunition to do it.

In frank, personal terms, she shows us how the only way forward out of a polluted world of our own making is only through policy reform - a concrete set of actions to combat the mounting threat of total environmental catastrophe. What's needed, she argues, is something with radical verve and guaranteed protections: in other words, a New Deal.

On Fire finds Klein at her most canny and prophetic, and the stakes of our imperiled global situation higher than ever before. In wide-ranging essays reporting from varying stages of ecological crisis - from prescient clarion calls from years ago to our panicked present - Klein wakes us up from our environmental sleepwalk and sets us on a course of potent, necessary action.

davidjordan84
5,0 van 5 sterren This one is hot.
18 september 2019 - Gepubliceerd op Amazon.com
It's exciting to have the opportunity to read a book that feels so important. Our rapidly advancing climate crisis has advanced beyond the worrisome stage and we are faced with the possibility of catastrophic disaster if we continue on the destructive path that has brought us to this place. Naomi Klein shares her considerable expertise and formidable knowledge concerning climate change, environmental disaster, and the intersectionality of economic inequality, systemic racism, the dangerous excesses of unregulated capitalism, the immigration crisis, declining health outcomes, and more. That might make it sound like an enormously depressing read, but the good news here is that Ms. Klein has created a compelling case for a comprehensive Green New Deal that would create the potential for improving and even alleviating most or all of these problems. She exhaustively documents the need for such a program and convincingly lays out her case for adopting a Green New Deal now.
This very moment.
I was tempted to despair as I read her account of the many climate disasters our world is currently subject to, some of which I did not even know about. Thankfully though, I found reason for hope in the pages of this book. "On Fire" is certainly one of the most important and inspiring books that I have read in a very long time, and I am enthusiastically recommending it to everyone who lives on this planet, and wants to keep doing so.

Tony Meyer
1,0 van 5 sterren Not a good book
18 september 2019 - Gepubliceerd op Amazon.com
Geverifieerde aankoop
Page 241 of this junky book says quote: "a good start would be divesting your pensions from fossil fuels and investing ... in green energy cooperatives." Ms Klein fails to grasp that wind and solar machines are built from nonrenewable resources! [M. Mills]. Building one wind turbine requires 900 tons of steel and 45 tons of nonrecyclable plastic! [not to mention 2,500 tons of concrete]. Page 45 of this book says, quote: "50% of global emissions are produced by the richest 10% of the world's population". This is false. China consumes over 3 billion [that's with a B as in bodacious] tons of coal per year, roughly half the world's annual coal production. China's energy is used to heat and give inexpensive running water and electricity to 1.3 billion Chinese citizens; of lower and middle class no less. Page 251 of this book mentions "capitalism ... has been the single greatest contributor to a disastrous global emission spike in recent decades" - unquote. Why doesn't Ms Klein go protest in the biggest coal producer/ consuming nation - - China? Answer: because in China Ms Klein would be locked up. There are a slew of other mendacious statistics in this trashy and poorly researched book where there are zero footnotes. In a freedom-loving country like the good ole' USA where Ms Klein lives and works [page 18] Ms Klein is free to protest. The hypocrisy!
Meer lezen
32 mensen vonden dit nuttig
Vertaal recensie in het Nederlands

Theodore A. Rushton
5,0 van 5 sterren Will enough people listen this time?
9 oktober 2019 - Gepubliceerd op Amazon.com
Geverifieerde aankoop
Thank the 'Great White North' for Naomi Klein and Prime Minister Justin Trudeau; Klein for her succinct summaries of almost 10 years of environmental analysis in this gem of a brief book - - and Trudeau his very human response to change.

Like Rachel Carson and 'Silent Spring', Klein will be remembered for explaining the attitudes, inactions and complacency that will shape our environment over the next century. Her book is a concise gem. Likewise, we can thank Trudeau for helping make it happen. Had her warnings been heeded over the past four years, he'd now be bouncing about boasting, "We're No. 1! We're No.!" - - instead of worrying about being "bounced" in his re-election bid.

Let's start with Trudeau who, in 2017, told a cheering crowd of oil executives in Houston, "No country would find 173 billion barrels of oil in the ground and just leave it there." (If Trudeau loses his re-election bid, his outlook will seem benign compared to the likely fate of the Alberta tar sands in the hands of Conservative cretins.)

Klein succinctly outlines the impact of such decisions.

(However, on a personal basis, I think humans are a "super virus" that is ravaging our planet. But, I'm also an optimist. After a few billion deaths, the planet and enough humans will survive in a new mutual understanding of Mama Nature. Am I right? Well, consider the May 6 Intergovernmental Science-Policy Platform on Biodiversity and Ecosystem Services report, based on 15,000 research papers. It predicts the extinction of a million species of animals, insects and plants by the end of the century. In other words, at the present of pollution and exploitation, almost everything but 'Indifference' is threatened.)

It's time to listen.

What is possible? Well, consider the impact of the 'Silent Spring' by Rachel Carson, the early disaster warning in 1962 that is becoming the reality cited by Klein. People always ignore the impact of pending disaster; it's why there have been 10,000 "civilizations" in the last 5,000 years and none have survived its forecast of demise. Carson's working title for the manuscript? 'Man Against the Earth'.

Instead of Klein's "Green" response, it's likely people will use the tradition approach - - engineering. It will be called 'geo engineering', and if it's very expensive, 'Brilliant Engineering'. It may shield the planet with a near-space blanket of chemicals (or dust) as an umbrella to block sunlight. Brilliant engineering created our modern world, but its dark side is always the "unknown unknowns." Unk! Unk!!

Just how does "life" deal with a "virus" such as humanity? If the past offers any guidance - - the first response will be a 'DDT' quickfix solution. It's nice to invent the future; it's something else to make it work. On that note: Where are the flying cars we were promised in 1945? We don't even have 'smart' cars yet.

Granted, she's optimistic. It's the saving grace of her book, and a reason for all to trust in "just a bit of global disaster, nothing too serious." In engineering we trust, all else is rust, dust and bust. Remember the old saying from the 1930's Dust Bowl devastation? "In God We Trusted, In Kansas We Busted."

Tim from Tuckerton
2,0 van 5 sterren BOOORING...
30 september 2019 - Gepubliceerd op Amazon.com
Geverifieerde aankoop
Bestseller, Green New Deal and my love of nonfiction were a win, win, win for my money.
This was one of the very few books I just could not read to the end; the last third being a here and there skim because it soooo lost my attention.
Seemed to me a cobbled together work with only 50% relevant material to make it long enough to be another book.
BUT, I did learn that Elizabeth Warren should be our next President!!!
Meer lezen
8 mensen vonden dit nuttig
Vertaal recensie in het Nederlands
Ga naar Amazon.com om alle 33 recensies te bekijken 3,8 van 5 sterren
Terug naar boven
Over ons
Verkoop bij ons
We helpen je graag
© 1996-2020, Amazon.com, Inc. en dochterondernemingen