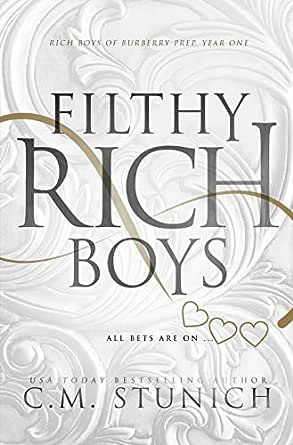 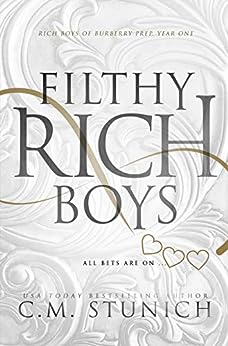 Break the new girl.
That should be easy, right?
Trash like her doesn’t belong at Burberry Prep.
No, Marnye Reed is going down, and we plan to make a spectacle out of it.
Let’s see who can make her fall in love first.
Bet’s on. Any takers?

Take on the filthy rich boys.
They’re the idols of the school, veritable gods on earth.
Old Money. New money. A rising star.
These guys are nothing like the ones at my old school.
I might come from nothing, but I’m determined to be someone, and I won’t let them get in my way.
They say they’ll make my life a living hell; I think they mean to keep that promise.

***FILTHY RICH BOYS is a 97,000 word reverse harem/mature high school bully romance novel. This is book one of four in the series. Contains foul language and sexual scenes; any sex featured is consensual.

Claudia Coenen
5,0 van 5 sterren Late to the game
8 juni 2019
Indeling: Kindle-editieGeverifieerde aankoop
I bought this book when it came out but put it on pauw waiting for all the books to come out Because i just knew that c.m. writes like the devil is on her tail and the story would be amazing.

I was not wrong and glad i waited! This will be rapid Fire reading Because we all want to know how this will end!

Amber
5,0 van 5 sterren Heartbreakingly awesome!
29 maart 2019
Indeling: Kindle-editieGeverifieerde aankoop
Well don't know if "heartbreakingly awesome" is a word but... It's accurate for this book! And I can't wait for book2.. Well.. All of them actually! Haha. Loved it! Keeps you awake and thinking..(plotting xD)
Meer lezen
Nuttig
Commentaar geven Misbruik melden
Vertaal recensie in het Nederlands

Duntax
4,0 van 5 sterren It's addictive
2 mei 2019
Indeling: Kindle-editie
The damn book is addictive. Thankfully, because I had a few issues with the story. The characters are 15 but as Im reading they dont read as 15. So after a while theyre like 19 in my head.
Tattoos at 15? and uhm... rockstar at 15?
But all the other things are freaking addictive. The story is awesome and makes you forget the little issues I had... So I just keep on reading

Marissa
1,0 van 5 sterren It’s a no
3 april 2019 - Gepubliceerd op Amazon.com
Indeling: Kindle-editieGeverifieerde aankoop
This sounded interesting based off the synopsis and I wanted to like it, but it was a mess all around.

Marnye was the dumbest character I’ve read in a long time. These people torment her and make her life a living hell and she just forgets that because she thinks they’re hot? Miranda befriends her at the start, but when Marnye finds out her secret, she spills it to Creed, when she had absolutely no business doing that, bet or no bet. Then you have the fact that this author is writing sexual scenes with teenagers under sixteen and it’s just disturbing.

None of these people had any remotely likable qualities with the exception of perhaps Miranda and I would say Andrew, but I quit reading after Marnye gives up Miranda’s secret with zero hesitation.

Horrible book and this is a do not recommend. I don’t understand all the high ratings.

AmazonCustomer
1,0 van 5 sterren As bad as Rape - 15 year olds drug and beat a little girl
5 april 2019 - Gepubliceerd op Amazon.com
Indeling: Kindle-editie
Since reading CMs last book Ruined I decided to try one more. Only to read and absolutely be disgusted once again. What kind of writing is this? 14-15 year olds bullying each other and tormenting a little girl who has been abused all her life.

I love a bully romance any day, but here are 3 boys and they didn't have any redeeming qualities. NONE.

This is why I like bully romance--bc disguised as hate is actually protectiveness and LOVE. The heroes actually focus on PROTECTING the FMC. They have redeeming qualities!! The FMC is a strong woman who figures out things. Fights back right away.

This book right here is NOT A ROMANCE. It is again abuse. It's unhealthy and sick. So don't go into it thinking it's a romance. It's cruel intentions x1000.

The MC has even tried to commit suicide 2x caused by bullying--caused by "a bet"-they still bully her. . . And they also learn her dad's a drunk and laugh at her.

They DRUGGED the herione and cut off all her hair. Who the f does that?

They BEAT the herione to where she's coughing blood.

They film her naked unkmowingly and show it to the school.

This is almost as bad as labeling her last book as a romance--a 16 year old girl being raped in her last book, Ruined. I'm so disgusted and disappointed. I've loved CMs writing in the past, I fell in deep love with Groupie you know characters who were actually OF AGE, who were actually adults--and actually cared and LOVED the herione.

This book even has a character from Groupie in it. But he's the cruelest.

If you read this--go in knowing it's not a romance. It's NOT even a rh harem. CM has it mislabeled to sell more books...

This was a horror show. . .I admit I couldn't stop reading because I expected the MC to stand up for herself. To be SMART. Not fooled by these guys. It made me sick.

UPDATE: I was disappointed because this book has no resolution. It's full on bullying to the worse extent of getting a young woman to commit suicide. I hated this book so much. There's no resolution, there's no satisfaction. I still hate it. It left me with a horrified, disgusting feeling. However, I was curious about book 2. I read it in one night. It had all it's missing parts of a bully romance book 1 didn't. I don't forgive the "heroes" for what they did at all. They were beyond heartless. They were disgusting. But book 2 was enjoyable because the FMC was stronger and took revenge in a way that was not stooping to the rich kids level. It was brilliant.

I think these 2 books should have been combined leaving readers better satisfied as some justice was served.

Amazon Customer
1,0 van 5 sterren MEH...
3 april 2019 - Gepubliceerd op Amazon.com
Indeling: Kindle-editie
The title says it all - Filthy Rich Boys. Yes - BOYS. 15 year old boys. This would have been an awesome book if these boys were older guys. Like 18 at least. It’s hard to imagine these little boys driving Lamborghinis and Ferraris. Do they need a booster seat? Then there is the fact that these little boys seem to have the sex skills of seasoned porn stars. One has tattoos all over him. At 15.? Yeah right. They have the ability to destroy anyone and everyone. I get that it supposed to be entertaining, and these boys are supposed to be so hot, but there is no earthly way to have a book crush on a boy who probably doesn’t even shave yet. Just no.
Meer lezen
130 mensen vonden dit nuttig
Vertaal recensie in het Nederlands

Your Mom!
5,0 van 5 sterren *picks jaw up off the ground*
29 maart 2019 - Gepubliceerd op Amazon.com
Indeling: Kindle-editieGeverifieerde aankoop
This is something you've never seen before. I mean sure, there are no new original elements, but this is a bully RH romance. This is the first bully RH (that I've run across). And, it was done beautifully.

CM knows how to sink her claws into you and then doesn't let go until you've finished reading it.

This was no different.

The bullies are truly mean. The FMC is poor and has struggled with some things in her life (I don't want to give anything away). CM puts true struggles into Marnye's life and they're real. She makes you want to cry with the FMC. She wants you to hope that she exacts some sweet revenge on them.

She wants you to want to bring these bullies to their knees and for them to beg for forgiveness.

Which, I'm sure she will. They will come on their knees begging Marnye for forgiveness.

What a wild ride she has taken me on and I can't wait for year two. These boys need to be taken down.