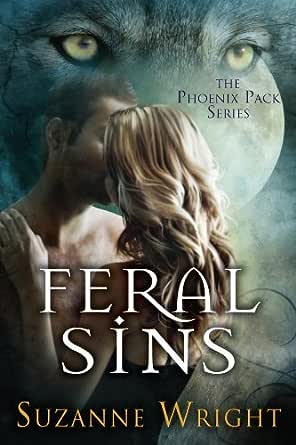 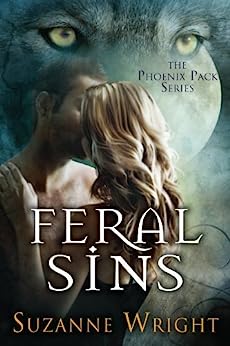 When female wolf shifter Taryn Warner first encounters Trey Coleman, an alpha male wolf shifter with a dangerous reputation, she’s determined to resist his charms. After all, Trey—who was only fourteen when he defeated his own father in a duel, winning the right to be alpha of his pack—can’t have anything to offer the talented healer besides trouble, or so she thinks. Taryn finds herself drawn in by Trey’s forceful demeanor and arctic-blue eyes, and she eventually agrees to enter an uneasy alliance with him. If the two succeed in convincing their respective packs that they’ve chosen each other as mates, Trey will win valuable political allies, while Taryn will escape an odious arranged mating.

But there are a lot of potential pitfalls to this plan—including the very real possibility that the wolf shifters, overwhelmed by their growing attraction to each other, will be unable to maintain the clear heads needed to pull off the deception.

When female wolf shifter Taryn Warner first encounters Trey Coleman, an alpha male wolf shifter with a dangerous reputation, she's determined to resist his charms. After all, Trey--who was only fourteen when he defeated his own father in a duel, winning the right to be alpha of his pack--can't have anything to offer the talented healer besides trouble, or so she thinks. Taryn finds herself drawn in by Trey's forceful demeanor and arctic-blue eyes, and she eventually agrees to enter an uneasy alliance with him. If the two succeed in convincing their respective packs that they've chosen each other as mates, Trey will win valuable political allies, while Taryn will escape an odious arranged mating.

But there are a lot of potential pitfalls to this plan--including the very real possibility that the wolf shifters, overwhelmed by their growing attraction to each other, will be unable to maintain the clear heads needed to pull off the deception.

Tutu
5,0 van 5 sterren This book
21 januari 2020
Indeling: Kindle-editieGeverifieerde aankoop
It was a must for me and I loved every part of it. This is the first book I ever reviewed on in my life and I have been reading since 15 and I am now 26 lol
Meer lezen
Nuttig
Commentaar geven Misbruik melden
Vertaal recensie in het Nederlands
Alle 1 klantenrecensies bekijken
Klantenrecensie schrijven

Kindle Customer
1,0 van 5 sterren So. Many. One-liners
22 oktober 2018 - Gepubliceerd op Amazon.com
Indeling: Kindle-editieGeverifieerde aankoop
I really wanted to like this book. I really did. The sample was pretty okay. But man, it's just bad. I can usually consume a romance novel in one afternoon. I can barely read one chapter of this at a time. There's too much exposition. There's so many named characters in each scene that it becomes a parody of 'Too Many Cooks'. The names of said characters are each so unique you find yourself missing the Janes and Johns of the world. But the biggest problem, the most grievous sin, is the main character Taryn.

She's a foul-mouthed Mary Sue. Her devil-may-care attitude is contrived at best. But worst of all, is her one-liners. She doesn't have conversations. She does vocal drive-bys like Obi-won Kenobi in the Star Wars prequels. Everything is an insult. Everything is a zinger. There aren't any yeses or nopes. She's always at an eleven with "Hell yeah you toad McGee!" or "No ma'am no ham no lambs no Shazam!".

Save your money. Save your sanity. Read literally anything else.

nomanon
2,0 van 5 sterren Story is incidental to the sex.
8 juli 2018 - Gepubliceerd op Amazon.com
Indeling: Kindle-editieGeverifieerde aankoop
Disappointed, to say the least. I like to read fantasy novels and don't object to a few sex scenes and colorful language, as long as such things are incidental to the story. Nicky Charles, for example, has a great series of shifter novels and I thought this might have been similar to those, so I purchased the first two in the Phoenix Pack series. Unfortunately, this book, although it might have had an interesting story-line, was mostly about sex. Whole chapters were devoted to descriptions of almost brutal sexual encounters. One chapter would have been sufficient, since subsequent chapter descriptions were minor variations of the first. If the characters weren't having sex, they were thinking about it. It eventually became tiring and I found myself skipping past the sex scenes so I could get to the story. In the end, I asked for a refund of the second book because there is no way I want to endure reading another waste of my life like this was. This book has a lot of good reviews, which is another reason I thought it would be good reading. What a shameful deception.
Meer lezen
42 mensen vonden dit nuttig
Vertaal recensie in het Nederlands

Samantha
1,0 van 5 sterren Cringey at best
31 januari 2019 - Gepubliceerd op Amazon.com
Indeling: Kindle-editieGeverifieerde aankoop
I was hoping for something like Patricia Briggs, but this is trash. The sex scenes are rapey at worst and cringe at best. There is no plot. The main characters thoughts are so repetitive. The “will they, won’t they?” was beat in to the ground. The female protagonist is all “zingers” and one-liners and doesn’t have anything substantial to say. The side characters are flat. If they’d all been killed off in a battle, I wouldn’t have blinked an eye.

Johnathon K
3,0 van 5 sterren An Adult Novel in a Shifter Setting
8 mei 2012 - Gepubliceerd op Amazon.com
Geverifieerde aankoop
This is a difficult review for me, so take it with a grain of salt. I was extremely bothered with some of the recurring themes in the book, but I realize that the very things which bothered me might make this book appeal to others, so I am going to attempt to review the book on its wordsmithing and construction merits rather than my personal degree of enjoyment of it.

The book centers on a group of shifters, people who have an "inner wolf" into which they can shift. The primary protagonists are Taryn, an alpha female who is latent, meaning she has her inner wolf, but she can't actually shift, and Trey, an alpha male who has her kidnapped, then convinces her to act as his bonded mate for political reasons. Predictably, this mating of convenience does not stay that way as real feelings between the two emerge.

For most of the story, Taryn is a very aggressive, very confident, very alpha character. She makes her will known, and she fights off the dominance attempts of Trey, also an extremely strong alpha. Accepted initially only as a political expediency by the rest of Trey's pack, she quickly wins over most of the pack's members.

The author's version of lycanthropy is a different view than most. The inner wolf is essentially a separate being, one who can come forward when needed into the physical form, but who also roils beneath the surface, making feelings and emotions known. This leads to one problem I have with the setup. If the person and the wolf are separate, and the people are mostly "normal" when not in wolf mode, then how do the people versions get some supposedly wolf-like powers? How can an alpha somehow projects waves of "alphaness," for lack of a better term, to cow strangers? How can a person smell a pregnancy, especially given a human's comparative lack of scenting ability?

And while this book was purportedly about shifters, very little of the book had them actually shifting. And when they did shift, they weren't particularly wolf-like. In a fight scene, for example, the wolves used their claws rather like cats, something real wolves do not do.

Trey's continual erections, even over innocuous statements, did not ring true to me, either. His recuperative powers were pretty impressive as well.

Frankly, I got tired and bored with the constant "I am going to do this to you and you are going to like it" and "No you wont or I will bite it off" (written in much cruder terms in the book). I realize that the main component of the literary tension in the book is Trey's attempt to dominate and break Taryn, but I never felt comfortable with the blatant violence and domination. It was celebrated in the storyline, but when Roscoe, to whom Taryn's father promised her, expressed his desire to break Taryn, it was obviously written about in a critical manner.

My biggest problem with the sex was the orgy scene. Trey is pathologically jealous, telling Taryn in no uncertain terms just what is allowed, and more importantly what is not allowed, into her orifices. Wolves do exhibit this type of behavior when a female wolf is in estrous, so I can accept that characterization. Yet he invites the male members of the pack to come in and essentially force themselves orally on her, to relieve themselves on her? This scene was so out-of-place, so gratuitous, that it completely destroyed much of what the author had tried to do in building up just who Taryn was.

I enjoy werewolf stories, and I can enjoy well-written erotica. But this story was basically an adult novel first, a lycanthropic story second. And as an adult novel, it bothered me. The heavy dominance theme will undoubtedly appeal to some readers, and I understand that. But putting aside my personal predilections, I feel that there are some craftsmanship weaknesses which would preclude this book from being really considered a great read, even for people who can appreciate the sexual tone.
Meer lezen
150 mensen vonden dit nuttig
Vertaal recensie in het Nederlands
Ga naar Amazon.com om alle 1.406 recensies te bekijken 4,4 van 5 sterren
Terug naar boven
Over ons
Verkoop bij ons
We helpen je graag
© 1996-2020, Amazon.com, Inc. en dochterondernemingen