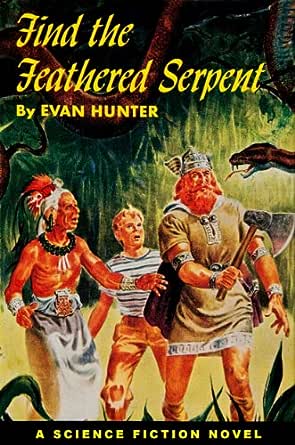 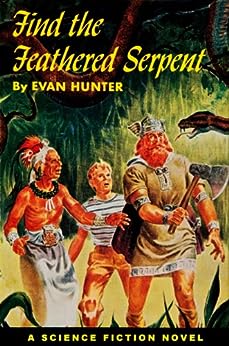 When the strange hourglass-shaped time machine crashed out of the twentieth century and into the Caribbean Sea of fourteen hundred years ago, Neil Falsen realized how unprepared he was to head the expedition that his father had organized back through time. Of the four men who had flown through centuries to solve the mystery of an ancient Mayan god, two had died in the shattering crash. Only Neil and ship's pilot Dave remained to cope with the language and customs of a people who had disappeared into the darkness of history.

It was confusing enough not to know which century the machine had fallen into. But Neil was sure his eyes were playing tricks when he spotted a Norse ship cutting proudly through southern seas. How ancient Vikings, Mayas and two twentieth-century Americans met - and fought - amid the splendors of a civilization that today dots the Yucatan peninsula of Mexico with its ruins, makes a tale as unique in telling as it is in content.

In scenes that throb with drama and thunder with excitement, Dave and Neil found frightening evidence of the approaching Mayan collapse. With a common modern device, Neil stepped into a tense religious ceremony to prevent human sacrifice. Without realizing it, he discovered the secret of the white god among the Mayan Indian dieties.

One of history's most intriguing suppositions forms the basis for this tale of the secret behind the legend of a lost civilization.

FIND THE FEATHERED SERPENT is a juvenile science fiction novel, published first in 1952 as one of the books in the Winston Science Fiction series. The author, Evan Hunter, had a very successful writing career. He was also prolific and used a number of pen names. As Hunter, he wrote THE BLACKBOARD JUNGLE, a novel dealing with juvenile crime and the New York City public school system. It and the 1955 movie based on the book were highly acclaimed. He also had a successful screenwriting career, producing scripts for movies and TV, including the screenplay for Alfred Hitchcock's film THE BIRDS (1963). However, he is probably best known for the crime fiction he wrote using the pen name Ed McBain. His 87th Precinct series is often credited with inventing the "police procedural" genre of crime fiction. The books were turned into a number of movies and TV series.

scribner
2,0 van 5 sterren Bucket list
19 februari 2017 - Gepubliceerd op Amazon.com
Geverifieerde aankoop
This was written back in 1952 before there was a space program. I read other books put out by this same publisher when I was 12- 14 years old. This book was one of those series that I couldn't find at the library back in the 1960's so I thought I'd read it on my Kindle. The story moved well. I had a chuckle at the author's idea of a time machine made of aluminium and plastic. Also, I'm a historical writer and the author didn't check his facts very well in the book, For example he has the Maya Indians of the 5th century AD eating pears and plums that are native to Europe. Papayas native to India and Potatoes native to the Andes in South America. All of these foods were unkown to the Maya. They ate beans corn and squash and wild game...he mentions wild boar which was introduced to Central America by the Spanish 1000 years later. His time machine runs on gasoline... quite amusing. He mentions his time travelers as having guns one time but are not mentioned again when it could have been used in the story well. The author has a number of typos and wrong words used. I know these books were very popular with young people during my early teens. I would love to rewrite it, better upgraded with more character development, and a plausable plot line. I'm 64 now with lots of writing experience. I did fulfil my bucket list dream to read this book from my youth. The Secret of the Martian Moons and Titan adventure were two more I read 53 years ago.
Meer lezen
2 mensen vonden dit nuttig
Vertaal recensie in het Nederlands

A. Simon
2,0 van 5 sterren Kukulkan for kids
8 mei 2018 - Gepubliceerd op Amazon.com
Geverifieerde aankoop
As with other reviewers I originally read this book back in the Stone Age when I was a young kid in Cuba, entitled A Voyage to the Past (in Spanish) and it was one of the few things that the Communists let me take out of the country (they stole everything else, including my 25 cents). Although I enjoyed it as a kid, now as an adult I cringed reading it. Oh, well.

Anyway, the story is that a teenager is asked to take his father's place on the maiden voyage of a time travel expedition done for anthropological reasons. Something goes wrong with the machine and they crash (nothing that a little hammering won't fix) in the past in Yucatan, during the Mayan period. Adventures follow.

DELee
4,0 van 5 sterren A Good Time Travel Yarn
12 februari 2014 - Gepubliceerd op Amazon.com
Geverifieerde aankoop
Many of us who came to science fiction in the 1950s credit our introduction to the genre to the Winston series. Winston recruited a stable of well-established SF authors, including such icons as Arthur C. Clarke, Ben Bova, Lester del Rey, and Poul Anderson, to write a series of books for the 13-17 age group. The quality of the writing ranged from poor to fairly decent. Find the Feathered Serpent is one of three time travel novels in the series – two of them by the same author, Evan Hunter (who also wrote under the names Richard Marsten and Ed McBain) – and it’s one of the better Winston offerings.

In the story a 20th century time machine, which also doubles as a helicopter, runs into trouble enroute to Yucatan in the 1st century BCE and crashes on arrival, killing two of the four-man crew. From there it becomes an interesting adventure story mixed with information about the Mayan civilization that flourished in what is modern day Mexico throughout the first millennium BCE. There’s a bit of ambiguity about when the time travelers actually land, since they immediately encounter a Viking ship off the coast of the Yucatan peninsula. It’s generally thought that Norse seafaring began in the late 8th century. That would place the story in the 900 - 1000 BCE period. That’s logically consistent, since most historians regard that as the high point of Mayan civilization. The Viking element of the story is not nearly as improbable as it may sound. Some very well-credentialed scholars have theorized that Scandinavians, who are known to have traveled widely throughout the North Atlantic, could have reached Central America.

The story features attacks by the Mayas less-than-civilized neighbors, mutiny by some members of the Viking crew, and the introduction of a 20th century teen ager to everyday life in Mesoamerica 1,000 years ago. It’s a well-written novel targeted to an adolescent audience, and it stands up very well 60 years after its first publication.

Ron Moseman
5,0 van 5 sterren I finally "found" the Feathered Serpent after all these years.
20 december 2016 - Gepubliceerd op Amazon.com
Geverifieerde aankoop
I remember reading this book when I was about 12 or 13 and have been searching for it ever since. Apparently it's highly collectable and hard copies are quite expensive. So even though I would prefer to have an actual book I was still thrilled to find and buy a digital copy. Aimed at young readers the story still transports me to a world of myth and legend acessed via time travel. I'm nearly 70, so to still fondly remember and seek out a story that I first read about 57 years ago speaks highly about the books power to excite the imagination of a 12 year old boy.
Meer lezen
Een iemand vond dit nuttig
Vertaal recensie in het Nederlands

Michael J. Everhart
3,0 van 5 sterren Classic science fiction from the 1950s
21 augustus 2019 - Gepubliceerd op Amazon.com
Geverifieerde aankoop
Just another uncomplicated time travel yarn from the early years of science fiction... I read it as a teen in the 1950s and re-read it for the fun of it... Interesting juxtaposition of time travel, Mayan culture and Vikings.... Juvenile level book.
Meer lezen