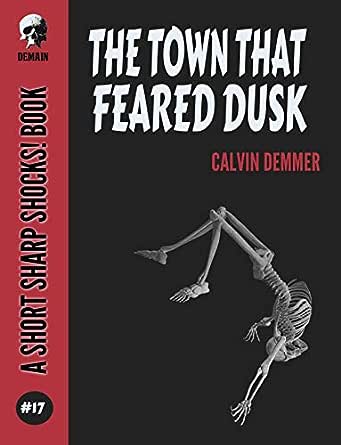 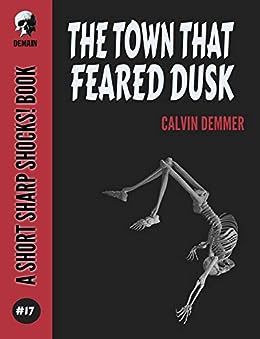 Sylvia Bernstein doesn't want to end up on a dead-end path like a former journalism colleague. She begins searching the tabloid's archives for a story that can get her career back on track. A strange bridge, with an abnormally high rate of suicides, seems like the perfect place to start. She journeys to the little town, eager to investigate, but encounters a tale far more sinister than she ever expected…

Silver Screen Videos
2,0 van 5 sterren Too Much Talk; Not Enough Fear
7 januari 2020 - Gepubliceerd op Amazon.com
Geverifieerde aankoop
Some 40 years ago, at the tail end of the drive-in era, a low budget horror film called “The Town That Dreaded Sundown” was quite popular. I’m guessing that the name of that movie struck a responsive chord with author Calvin Demmer, who has now written a short story titled “The Town That Feared Dusk.” I give Demmer credit for that Easter Egg tribute to a revered B-movie. I’ll also give him credit for an active imagination. Unfortunately, his imagination and his desire to explain everything to readers wind up overwhelming a story that winds up totally out of control.

“The Town That Feared Dusk” is part of a series of shorter horror works called “Short Sharp Shocks.” I haven’t read any of the others, but sharpness and shock are in short supply here. The plot of “The Town That Feared Dusk,” though, is prime material for a horror story. An aspiring young reporter named Sylvia sets out to visit a small town that was home to an “attraction” that the locals labeled the suicide bridge. Her mentor and editor at the unnamed news journal left some notes about investigating the bridge shortly before he blew his own brains out. Sylvia takes a trip to the town and notices how the streets are deserted. Also, as dusk nears, townsfolk are reluctant to talk to her. So, she visits the bridge and discovers…

Of course, what Sarah discovers is the point of the story, and I won’t describe it here. That doesn’t, however, prevent author Demmer from describing it when it occurs. It also doesn’t stop Demmer from presenting not one, but two, lengthy explanations by different characters of just what is going on. And that’s where “The Town That Feared Dusk” goes wrong. The best horror stories usually don’t go overboard on providing a full explanation for the weird goings-on, and, when they do, that explanation often tends to be talky and unconvincing (a prime example being the shrink discussing Norman Bates’s behavior at the end of “Psycho”).

The explanations that the two characters offer for the bizarre goings-on at the bridge take up over half of what is a short novelette. In fact, there’s far more discussion of what’s causing the phenomena than actual encounters with the unknown. Sarah displays some qualities of a good reporter in drawing out her subjects, but that comes at the expense of any real creepy moments. The story also has little in the way of character development or really any examination of Sarah’s inner thoughts, often a key in a horror story. It takes two pages for Sarah to arrive in town and one more page to arrive at the bridge. As a result of this rush to move the story along, any semblance of a spooky atmosphere vanishes.

Calvin Demmer has taken what s a good idea for a horror story, namely, a town that’s afraid of a “suicide bridge,” and turned it into a talky mess with an ending that borders on silliness. He is the author of some other works that I have not read and which might well be effective horror tales. He has some writing talent. However, “The Town That Feared Dusk” would have been better with more time building atmosphere and suspense and less explaining things that by their very nature can’t be explained rationally. As it is, the story is all talk and no fear.
Meer lezen
Vertaal recensie in het Nederlands

William B
5,0 van 5 sterren Another great short story from a talented wordsmith...
9 mei 2019 - Gepubliceerd op Amazon.com
It seems it’s always those little packages that have the most bang, and The Town That Feared Dusk by Calvin Demmer was filled with some mighty explosions. For some reason whilst reading this short story I was reminded of the film The Forest and Aokigahara Forest (Japan’s suicide forest), but in this instance it’s a suicide bridge. I’ve read a few of Calvin’s short stories and always come away feeling a bit queasy and somewhat horrified. Beware when and where you walk in one of Calvin’s plots because you never know what will happen or where you’ll end up. Another great short story by a talented and skillful wordsmith. As always, I look forward to his next adventure.

From the back cover: Sylvia Bernstein doesn't want to end up on a dead-end path like a former journalism colleague. She begins searching the tabloid's archives for a story that can get her career back on track. A strange bridge, with an abnormally high rate of suicides, seems like the perfect place to start. She journeys to the little town, eager to investigate, but encounters a tale far more sinister than she ever expected…

About the author: Calvin Demmer is the author of The Sea Was a Fair Master and The Town That Feared Dusk. When not writing, he is intrigued by that which goes bump in the night and the sciences of our universe.

Other books by Calvin Demmer: The Sea Was a Fair Master, and his short stories have appeared in Hardened Hearts, Test Patterns: Creature Features, and Deadman’s Tome: Monsters Exist just to name a few. His stories appear in other magazines and publications as well.
Meer lezen
Een iemand vond dit nuttig
Vertaal recensie in het Nederlands

Michelle Rubio
5,0 van 5 sterren So good!
19 april 2019 - Gepubliceerd op Amazon.com
4.5, rounding up to 5 stars, but only 4.5 because I wanted more! I could read a full length novel of this story and be on the edge of my seat with the way Calvin Demmer writes! I hardly noticed how quickly I read it until I was done and had to sit a few minutes to process, because what the heck!! And I mean that in a good way! You don't need a summary or "about" for this, as it's a short story and anything I add could just give it all away, so I'm just going to gush on the writing. Short stories can be hard to get immersed in just because, well, they're supposed to be short. Too many details turns it too long, and not enough leaves you feeling like you missed something. Demmer drops you into this story and even though initially I felt like I was lost and needed more info, as it moved along, the puzzle pieces start fitting and the story grips you. Very well done and entertaining. I love when a short story sticks, because I tend to prefer lengthy/overly wordy books. Demmer's stories are like a breath of fresh air for someone like me.
Meer lezen
Een iemand vond dit nuttig
Vertaal recensie in het Nederlands
Ga naar Amazon.com om alle 27 recensies te bekijken 4,3 van 5 sterren
Terug naar boven
Over ons
Verkoop bij ons
We helpen je graag
© 1996-2020, Amazon.com, Inc. en dochterondernemingen