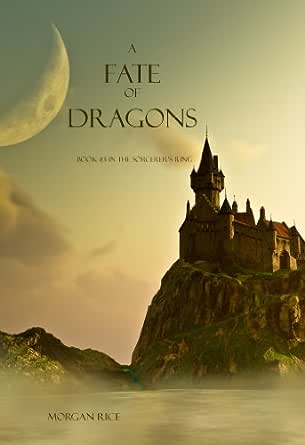 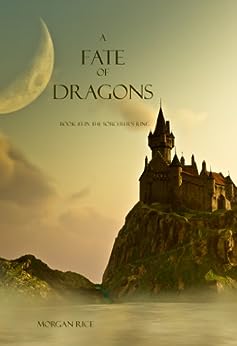 “THE SORCERER’S RING has all the ingredients for an instant success: plots, counterplots, mystery, valiant knights, and blossoming relationships replete with broken hearts, deception and betrayal. It will keep you entertained for hours, and will satisfy all ages. Recommended for the permanent library of all fantasy readers.”
--Books and Movie Reviews, Roberto Mattos

A FATE OF DRAGONS is book #3 in the Bestselling series THE SORCERER'S RING, which begins with Book #1, A QUEST OF HEROES--a FREE download with over 1,000 five star reviews!

A FATE OF DRAGONS (Book #3 in the Sorcerer's Ring) takes us deeper into Thor’s epic journey to becoming a warrior, as he journeys across the Sea of Fire to the dragon’s Isle of Mist. An unforgiving place, home to the most elite warriors of the world, Thor’s powers and abilities deepen as he trains. His friendships deepen, too, as they face adversities together, beyond what they could imagine. But as they find themselves up against unimaginable monsters , The Hundred quickly goes from training session to a matter of life or death. Not all will survive.

Along the way, Thor’s dreams, along with his mysterious encounters with Argon, will continue to plague him, to press him to try to learn more about who he is, who his mother is, and what the source of his powers are. What is his destiny?

Back in the Ring, matters are getting much worse. As Kendrick is imprisoned, Gwendolyn finds it landing on her to try to save him, to save the Ring by bringing down her brother Gareth. She hunts for clues for her father’s murderer along with her brother Godfrey, and along the way, the two of them will become much closer, united in their cause. But Gwendolyn finds herself in mortal danger as she presses too deep, and she may be in over her head.

Gareth attempts to wield the Dynasty Sword and learns what it means to be King, becoming drunk with the abuse of power. He rules ruthlessly, becoming paranoid. As the noose tightens on the king’s assassin, the McClouds attack deeper into the Ring, and King’s Court finds itself in an increasingly precarious position.

Gwendolyn pines for Thor’s return, for them to be together, for their love to blossom. But with powerful forces in their way, it is questionable if that chance will ever come.

Will Thor survive The Hundred? Will King’s Court collapse? Will MacGil’s murderer be found? Will Gwendolyn end up with Thor? And will Thor finally learn the secret of his destiny?

With its sophisticated world-building and characterization, A FATE OF DRAGONS is an epic tale of friends and lovers, of rivals and suitors, of knights and dragons, of intrigues and political machinations, of coming of age, of broken hearts, of deception, ambition and betrayal. It is a tale of honor and courage, of fate and destiny, of sorcery. It is a fantasy that brings us into a world we will never forget, and which will appeal to all ages and genders. It is nearly 70,000 words.

All 17 books in THE SORCERER'S RING are now available!

Amazon Customer
3,0 van 5 sterren NOT recommended for under 16/17; not well-enough written for beyond 19
13 oktober 2016 - Gepubliceerd op Amazon.com
Geverifieerde aankoop
This series, and its author, are challenging to give an accurate rating. While the author has developed a decent story line, the mechanics of her writing leave a bit to be desired. I recognize that her target audience is most likely a high-school, perhaps even beginning college-age, students. I would advise against middle-school and early high-school ages; while I would rate the first 2 - 3 books of the series as "some" violence and sexual content, anyone that begins reading the series is left wanting to continue, as each book ends with a cliffhanger. As the reader works past the first couple of books, graphic violence and sexual content, including rape as an enjoyable past-time for the foes, soon enter into the story line.

As for the mechanics of writing, the author needs to learn a few things, such as spelling, punctuation and grammar. While some may be typos, it is unbelievable how many errors one must endure. At times, it is hard to make it more than six pages without glaring errors. As a teacher, I am appalled that our youth will directed by what they are seeing in print.

Additionally, the author simply needs to learn how to count. In each book, I found myself having to go back and reread pages to make certain that I was simply not confused. The hero and entourage would be up against 25 foes; after eliminating say, 10, they still had 18 to go. (This is not a specific example, but rather, indicative of several scenes throughout the series.)

While I like to see what students are considering "literature" these days, I simply could not force myself to continue past Book Six, and feel somewhat amazed, and chagrined, that I managed to stay with the series that long. Again, the author does have a decent story line, but the errors in writing and continuity are just beyond belief. I do not see as many errors in the work by my students.

Jon
2,0 van 5 sterren not so good
3 december 2013 - Gepubliceerd op Amazon.com
Geverifieerde aankoop
I buy these books because my son (now nine) liked them. I read them so he and I can talk about them. He is an avid reader and these were among his first bigger kid books. He has, as more books come out (Rice churns out a book every two months), begun to pick out glaring inconsistencies in the books and make fun of the one-dimensional characters. He is now reading books with more complex character development, and at nine, he sees the difference between this category of books and the Sorcerer's Ring books, and if you read these books, you will pick up on it much sooner than a nine year old boy. If my son continues reading these books, I will continue buying them and skimming over them, but I in no way enjoy the simplistic writing and silly story.

BTW If someone in the Ring invented a gorget, he'd win a Nobel Peace Prize. Ninety-five percent of the people killed in these books are stabbed in the throat (like I said, unimaginative) and with a gorget, noone would die, and everyone could just get along!

S. L. Dale
3,0 van 5 sterren Great story but needs editing
25 december 2016 - Gepubliceerd op Amazon.com
Geverifieerde aankoop
I decided not to finish the series. I enjoyed the plot, that of a young man who manages to join an elite group of soldiers through hard work and tenacity. There are all the favorite elements fantasy fans look for - palace intrigue, knights with unbendable honor, shady witches, huge dragons, scary attacking forces, monsters, and magic spells. That's why I stuck with it for three books. But the dialogue and prose are in desperate need of a sharp editor - many opportunities to tighten up the prose were missed. In addition, descriptive words were in many cases poorly chosen and used too often so they lost their meaning. Characters' reactions to things were predictable, which disappointed me, and they didn't grow (or degrade) as the plot unfurled. It's such a shame, because the basic story elements were there in spades. Morgan Rice, fire your editor and get one worthy of your plots.
Meer lezen
4 mensen vonden dit nuttig
Vertaal recensie in het Nederlands

JS
3,0 van 5 sterren Getting Ridiculous
2 september 2016 - Gepubliceerd op Amazon.com
Geverifieerde aankoop
I'm really struggling with this series. On one hand there is an overall good story, with interesting characters. On the other hand, the author just goes too far at times to make the story believable within the fantasy world. Characters are caricatures, and it's immediately apparent whether they are good (if they are "beautiful" or "noble" appearing), or bad (if they are dressed in black, sneer, or anything else negative is mentioned in the first paragraph where they are introduced). Good characters are noble, flawless, and undefeatable, while bad characters have no redeeming qualities. Monsters are said to be ridiculously large (teeth as big as houses, footprints deeper than a canyon, etc.), and battles of 300 against 1 are won by the one person because he is "the greatest knight in the land" (nothing having to do with magic - just supposedly because he's that much stronger and skilled than everyone else). Single swings of the heroes swords kill multiple enemies, all arrow shots kill by passing through the throat, but multiple hits on our heroes only cause dented armor and a bit of general soreness. Love at first sight is taken to ridiculous levels. Anyone who joins the core characters of the troop for a mission is guaranteed to die. I could go on and on.

I'm going to try to hang in there for more of the series, as the books are an easy, light read and the overall story is fairly interesting, but I'm not sure I'm going to make it at this point.