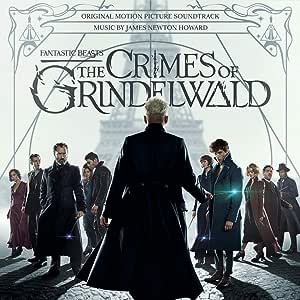 Susan Keogh
5,0 van 5 sterren Another wonderful soundtrack by Newton-Howard
17 november 2018 - Gepubliceerd op Amazon.com
Geverifieerde aankoop
Newton-Howard is one of my favorite composers, and I really loved his work on the first Fantastic Beasts soundtrack, so I couldn't wait to get this one. I was not disappointed. He threads many of the themes from the first movie into this one but not so much that you feel like it's just a rehash like many sequels' soundtracks can be with some composers. Lots of beautiful moments throughout this soundtrack. I don't usually buy soundtracks before seeing the movie, but I knew this one wouldn't disappoint me.
Meer lezen
8 mensen vonden dit nuttig
Vertaal recensie in het Nederlands

Jones
4,0 van 5 sterren Fun foray into expanding the musical world of Harry Potter
26 december 2018 - Gepubliceerd op Amazon.com
Geverifieerde aankoop
I think the first Fantastic Beasts was a bit more interesting in terms of soundtrack, but this one does well, too. The use of leitmotifs from the original films is done sparingly and with love, as well as very appropriately. I really wish there was a special edition of this, as there was for the first film. I may be in a limited slice of fandom, but I want as complete a soundtrack as I can get my hands on (which is why the Complete Recordings series for Lord of the Rings was so great, and why the ultra-fancy-ungettable boxset for Interstellar is so frustrating).

Only 4 stars because I know there's a lot we didn't get. That's always the case, but if you give me the option, I'll give you more money for more music. Hopefully eventually they'll give us something.

Charles R Fox
5,0 van 5 sterren Well Crafted Soundtrack, with Moments of Beauty!
4 december 2018 - Gepubliceerd op Amazon.com
Geverifieerde aankoop
I am very much a fan of this composer, and eagerly waited the two years since Fantastic Beasts and Where to Find Them was released. I feel that soundtrack was very unique amoung soundtracks. The two movies are as different as night and day, as are the soundtracks, but both match the overall feeling of the movies written for. The second in this series, ‘The Crimes of Grindelwald’ is very much darker, and absent of the optimism which came out in the first movie, and the ‘applied’ music is darker, with a feel of sadness in many places. The orchestration was first rate of course, and the first thing one realizes is there are none of the extended tracks, with the longest 6 1/2 mins. and most under 4 minutes. The first soundtrack Maestro Howard developed musical ideas fully, where as with this soundtrack, hardly at all. Still some beautiful ideas to be sure, just not developed fully as is his trademark of late.
I would recommend this soundtrack, as part of his corpus, as well as his work on the Nutcracker remake earlier this fall. His Concerto for Violin released on Onyx in October, sadly not yet available here on Amazon as yet, was truely wonderful, and a great representation of his gifts. I held hope these last two years that he would just springboard himself out there where only he can swim, as Fantastic Beasts was so filled with ‘absolute music’ which was stand alone without a screenplay......maybe next time if he continues with this series.
Meer lezen
3 mensen vonden dit nuttig
Vertaal recensie in het Nederlands