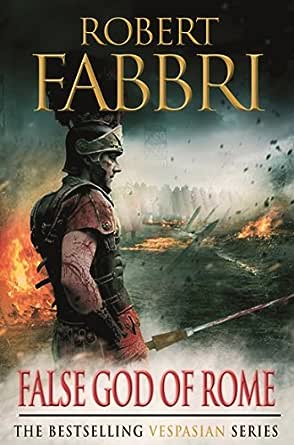 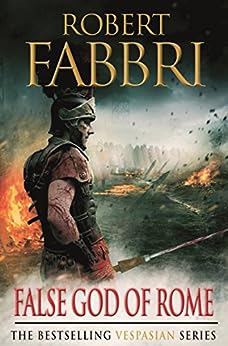 Rome, AD 34: Vespasian is serving as a military officer on the outskirts of the Empire. But political events in Rome - Tiberius's increasing debauchery, the escalating grain crisis - draw him back to the city. When Caligula becomes Emperor, Vespasian believes that things will improve. Instead, the young emperor deteriorates from Rome's shining star to a blood-crazed, incestuous, all-powerful madman.

Caligula's most extravagant project is to bridge the bay of Neapolis and ride over it wearing Alexander's breastplate. And it falls to Vespasian to travel to Alexandria and steal it from Alexander's mausoleum. Vespasian's mission will lead to violence, mayhem and theft - and in the end, to a betrayal so great it will echo through the ages.

Robert Paterson
5,0 van 5 sterren Each book in the series gets better
17 maart 2013 - Gepubliceerd op Amazon.com
Geverifieerde aankoop
Living in the time of the Julian Emperors as a rising man was very hard. Fabbri has captured this challenge so well as his hero, and mine, Vespasian takes the next steps. No wonder he as Emperor was the model of stability. We end this book with Caligula out of control and Vespasian and others sure now that their days are numbered and will have to act. We know that ahead lies Tiberius and then Nero and another 30 years of angst.

This is an epic series in every way that covers a huge canvas. But Fabbri ties us closely to Vespasian and uses the character of Magnus to tie us into the common people and some comic relief. There is of course the stupid brother Sabinus who can be relied on to make the wrong call every time. Sadly Antonia dies in this book. She was the key matriarch of the group who in the end backed Vespasian and the mistress of the love of his life the slave Caenis who in later life became proto empress. As I recall Antonia walled up her traitor daughter in the room next to her own bedroom and starved her to death. She was that kind of character and Fabbri enjoys writing about her.

We are starting to get to know the key freedmen who ran the empire, Pallas and Narcissus. It was Narcissus who helped Vespasian get his command which I suspect we will see in the next book. Aggripina and Messalina are also introduced. They will play a large role in the next book.

It will be a miracle for Vespasian and Corbulo to survive. Not from any enemy of Rome but from the Emperor and later the wives and mother of Emperors. All this intrigue is ahead and I can hardly wait to see how Fabbri covers this
Meer lezen
Vertaal recensie in het Nederlands

Malcolm Sullivan
4,0 van 5 sterren The history the politics and the madness of the Roman empire is insaitable
22 augustus 2013 - Gepubliceerd op Amazon.com
Geverifieerde aankoop
Vespasian now finds himself in deep water thinking that he has a fiend near the emperor only to find a mad mad as a friend instead.
You need to read this book if only to understand what the Roman emperor was capable of.
I couldn't believe what I was reading, yet I also could not put it down.
The madness, the desire and the totally outrageous things that went on.

Money and power do corrupt.
Roll on 5th Sept, I can't wait for the next book to arrive to see what other crazy things the Emperor does and how Vespasian handles them.

Pekka Karu
5,0 van 5 sterren Great third installment on the Vespasian series !
9 april 2013 - Gepubliceerd op Amazon.com
Geverifieerde aankoop
As good as the first two volumes, and the great thing is that Mr. Fabbri is not trying to cover too much time period per volume.

This installment basically covers Vespasian's whereabouts during Caligula's reign, and I am really hoping that the entire series will expand to at least six volumes, if not 7-8 (more the better !). Only thing that really frustrated me was that I have to wait for the next volume - this is such a well-written, great story that I almost wish I would have discovered it only after all volumes are available from start to finish.

I Highly recommend this series, and I cannot wait for the next installment. Well done !
Meer lezen
Vertaal recensie in het Nederlands

Blue in Washington (Barry Ballow)
4,0 van 5 sterren Vespasian's imperial apprenticeship continues
7 december 2013 - Gepubliceerd op Amazon.com
Geverifieerde aankoop
Third installment of a strengthening series that follows the life of the Roman emperor Vespasian, literally from the cradle. "False God..." finds the rising protagonist in the service of the fading emperor Tiberius, in the Libyan desert; but soon to become the BFF of the new and truly looney imperial replacement, Caligula.

Author Robert Fabbri pulls out all the cruel and degenerate stops in portraying the reign of the depraved Caligula and the dilemmas that Vespasian, his family and other prominent Romans faced in trying to live through this very dangerous period. Even as he serves as Caligula's righthand man, the now 30-year old protagonist gains some insight into his own future as the possible founder of a new dynasty, with the clear understanding that someone is destined to knockoff his lunatic sponsor.

Plenty of action and over-the-top bad behavior in "False God of Rome", which ends before Caligula is done in, and a lot of years before Vespasian is due to take over the empire. This is well written, historically credible and serves up some terrific characters.
Meer lezen
Een iemand vond dit nuttig
Vertaal recensie in het Nederlands

Bob Krakovich
5,0 van 5 sterren Vespasian III
25 oktober 2014 - Gepubliceerd op Amazon.com
Geverifieerde aankoop
The third in the Vespasian series. This introduces Caligula, and his rise to emporer. The graphic scenes of Caligula's debauchery may offend some. But if you are aware in advances of his vices, then that will not ruin the series.
Meer lezen
Vertaal recensie in het Nederlands
Ga naar Amazon.com om alle 30 recensies te bekijken 4,4 van 5 sterren
Terug naar boven
Over ons
Verkoop bij ons
We helpen je graag
© 1996-2020, Amazon.com, Inc. en dochterondernemingen