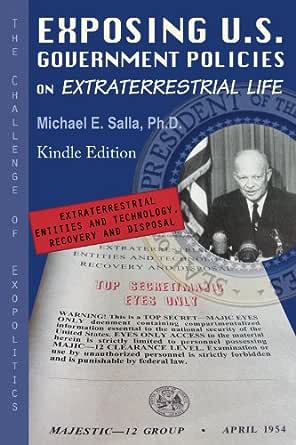 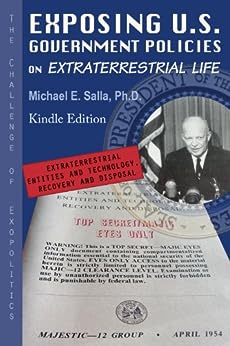 This book reveals how the U.S. has been secretly implementing public policy concerning extraterrestrial life without the awareness of the U.S. Congress, the general public and even senior national security officials. The revelations in this book will come as a profound shock to many. That will be especially so for public policy professionals who have mistakenly believed that seniority, responsibility and merit determine access to a country's most deeply hidden national security secrets. This book prepares the general public for the truth about extraterrestrial life, and how select government agencies in the U.S. and elsewhere have secretly implemented public policy over six decades. The hope is that exposing such information will inspire the general public to seek to participate in an informed way in future public debate over appropriate public policy on extraterrestrial life.
click to open popover

Nicholas Grachanin
5,0 van 5 sterren All the chickens are coming home to roost
26 maart 2019 - Gepubliceerd op Amazon.com
Geverifieerde aankoop
Excellent review of DOCUMENTED evidence from a numerous official and first hand sources that make it unavoidable that this has all been going of for decades by special access projects that have enjoyed technology well beyond what is commercially available.
Meer lezen
2 mensen vonden dit nuttig
Vertaal recensie in het Nederlands

C. druehl
5,0 van 5 sterren Day is Dawning
15 juli 2016 - Gepubliceerd op Amazon.com
Geverifieerde aankoop
Dr. Michael Salla has written an informative and well resourced book on this critical topic. When the 'lights' go on the world will be clamoring for this book. We have a deeply interesting history which so few can comprehend. The day is soon dawning when there will be sooooo many questions about what the heck has been hidden from 'we the people' for all of these years. This book will give answers and direction as each seeks his/her own understanding of this Truth !! Thanks to Dr.Salla.
Meer lezen
3 mensen vonden dit nuttig
Vertaal recensie in het Nederlands

Darlene from Kansas
5,0 van 5 sterren Excellent Researcher, and Expose on Things That Matter to US NOW!
1 februari 2015 - Gepubliceerd op Amazon.com
Geverifieerde aankoop
Michael E. Salla is a wonderful researcher, and this is the second book of his that I have received and read. Unfortunately, it is too true, and gives one a "cause to pause". Do you suppose the American government will ever stop lying to it's citizens? Makes you think!
Meer lezen
7 mensen vonden dit nuttig
Vertaal recensie in het Nederlands

G. LOBUONO
5,0 van 5 sterren Developing a whole new study: well worth reading
5 maart 2010 - Gepubliceerd op Amazon.com
Geverifieerde aankoop
Astronauts, military brass, and other high ranking officials now attest to direct, physical experience with non-humans and their craft. Years ago, Michael Salla PhD saw an abundance of good, reliable evidence suggesting that aliens exist. After teaching political science at American University, he dedicated himself to studying the politics of human-alien interactions (exopolitics). Salla's book examines the many sources on the subject, then uses the best evidence to develop an analysis of the implications of alien-human interactions. If you're new to the subject, read this book---it will help you sort out much fact from fiction. After an alien craft crashed near Roswell, NM in 1947, the US government dedicated huge resources to the study and replication of downed alien technology. As Salla notes, such programs rival the Manhattan Project in scale, but they far exceed it in scope.

Numerous reliable officials suggest that the US military was both perplexed and partly outmaneuvered by advanced, intelligent aliens during the first decade after Roswell. Salla's early chapters show how alien-related programs went deep black and soon became a security and constitutional nightmare. Initially, President Truman had direct control over alien-related programs, but when Eisenhower allowed Nelson Rockefeller to re-design his executive department in 1953, Rockefeller removed Eisenhower and subsequent presidents from active management of such programs. Eisenhower felt betrayed, and since 1953, crimes committed in alien-related programs have become a threat to both the US Constitution and human global security.

This book shows how the CIA Act of 1949 is used to funnel up to a trillion dollars annually into alien-related programs by allowing the CIA to secretly use funds from other agencies without regard to laws about their usage. Salla looks at the evidence for new, sometimes disturbing subjects like reported secret government agreements with extraterrestrials and human rights abuses at US government bases where whistleblowers say e.t.'s are allowed as part of joint programs (in which humans sometimes don't appear to have the upper hand). Worse yet, corruption and racketeering in alien-related government programs has resulted in disinformation and back-stabbing by CIA and other compromised personnae--all intended to confuse the public, for highly questionable reasons. Salla shows how some critics of Eisenhower National Security staff member Col. Philip Corso have crossed the line, going from critics to questionably-motivated debunkers.

Salla says "the power politics strategy that has dominated the extraterrestiral management system has laid the foundation for a devastating breakdown in the way the extraterrestrial presence is managed." In other words, human officials are way over their heads when dealing with extraterrestrials, who, can offer advanced technology to corrupt human officials in order to manipulate them and thwart public awareness of the many risks involved. What risks? Weapons technology, advanced spaceflight and energy technology, and more. The question, of course, is the alien agenda in all of this.

Both of Salla's exopolitics books, to date, break new ground by looking at very real, sometimes shocking developments in secret government programs that will play a major role in the technology and the politics of the human future. We're entering what may be the most important phase in all of human history---the tipping point in public awareness about aliens. However, readers must think for themselves and must carefully consider both the science and the credibility of the many sources who write on alien-related subjects.