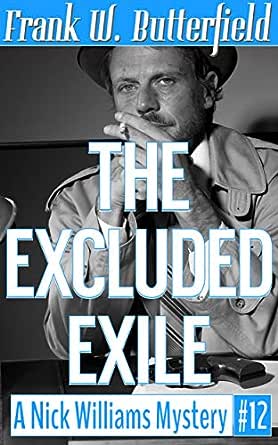 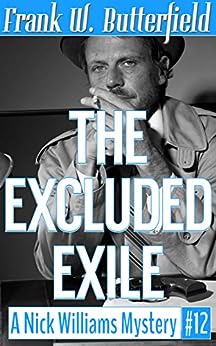 Nick and Carter are Down Under in Sydney at summer's end and are looking forward to finally having time to spend at the beach so Carter can get in some surfing while Nick works on his tan as a surf widow.

Everything is going to plan until they forget to make it look like they slept in both beds and are asked to leave their hotel. Fortunately, they're able to rent a house in the Eastern Suburbs atop a cliff that is two hundred feet above the Pacific. The house is perfect, with new furniture, an ocean-facing sunroom, and a housekeeper.

But then it starts to rain. And a dead body turns up in the kitchen, clobbered with a cast-iron skillet.

The questions start piling up. Who cleaned up the blood after the body was removed? Whose car is that parked at the end of the street? Will they ever make it to the beach?

In the end, it's another trans-Pacific adventure for Nick and Carter that leads home in a number of unexpected ways.

So, why is it that Frank Butterfield’s books appeal to me so much? The very idea of book twelve in a series is absurd…but this, to me, has become like a television show that I just can’t miss. Butterfield’s fertile mind keeps churning, and his attention to detail just gets better. That’s how this long storyline works…and indeed we’ve only covered two years of real time in a dozen books.

This time we’re in Australia, having accomplished the adventure in Asia (or, the Orient as it used to be called). Nick and Carter and their merry men seem to be one step ahead of the law, complicated by a mysterious shadow who, in his defense of Nick’s honor, isn’t afraid to start a body count. Our boys escape to Australia in order to have a few days of respite from the constant battle to bring truth and justice to the people about whom they care. All they want is a little vacation.

I confess, for the first third of “The Excluded Exile” was wasn’t quite sure what the point was, other than rather shockingly reminding us that good old Aussies were, in the 1950s, among the most homophobic people in the English-speaking world. Good grief. Even Nick Williams’ notorious millions don’t get him the kind of treatment a rich man should expect. In a world convinced that homosexuality is a chosen misbehavior, the righteous hypocrite holds a stacked deck.

At last we have a murder, although it made me a little sad. Then there was another murder, which was puzzling. So what started out seeming like an aimless travelogue about Australia ended up just as messy and complicated as the previous books in the series; and poor Nick and Carter hardly get any rest at all. Instead they end up rescuing various gay men in distress and dodging homophobic schmucks in the pursuit of justice.

I’ve been holding onto my Batman simile since I started reading this book—you know, millionaire Bruce Wayne and all; but I’ve decided there’s a Spiderman aspect to this as well. The law doesn’t really like Nick Williams (except those few liberal cops who see Nick for who he truly is). The law sees Nick and Carter as problems to be swept away. Only Nick and Carter’s money keeps them from catastrophe again and again. Perhaps it’s that comic-book fantasy that keeps me hooked. Butterfield gives me a nostalgia for the past that the past doesn’t deserve.

Sean Andrew McNamara
5,0 van 5 sterren Nick and Carter on the run!
28 augustus 2017 - Gepubliceerd op Amazon.com
Geverifieerde aankoop
How Frank Butterfield builds his stories in this series is both exceptionable and fascinating. The Nick and Carter stories have grown in complexity as range each new story with the characters taking more life and the stories supporting the growth from both reality and the mind of the author. Again, the story takes place with in a window of time in the mid to late 50's ,with Nick and Carter and their ever growing team fleshing out their roles in a quickly changing world around them. Them being gay and lesbians stepping out into the harsh light of discrimination and crushing bigotry to do the jobs they have chose and do very well. There are backstories being fleshed out, there are cross over stories if you've read the series and some of the satellite stand alone novels- none of which have to read to love each story alone. But the characters are maturing, gaining definition and subsistence- more dimensional. Bravo. I'm exhausted reading the travel all around the world and worry for the sanity of our characters as they run, pitch and roll with the punches-yet stay committed to each other and their and the lives of the people they care for futures!
Meer lezen
Een iemand vond dit nuttig
Vertaal recensie in het Nederlands

silvia
5,0 van 5 sterren Another winner
10 december 2019 - Gepubliceerd op Amazon.com
Geverifieerde aankoop
Another winner in this series. This book picks right up where the last one left off. We find the dynamic duo of Nick and Carter in Australia. They are treating themselves to some much needed r&r after the raucous time they had in Hong Kong/China plus Carter is hoping to get some surfing in. Oh boy, but trouble always seems to find them and I think I know why. Because they are good people. Their metal is constantly being tried and tested and they always pass the tests with flying colors. There is a new revelation brought to light that sucker punches Nick. Thank God Carter is by his side. As for the ending? My tears are still flowing!
Meer lezen
Vertaal recensie in het Nederlands

John D. Clayton
5,0 van 5 sterren Even Ian Fleming's Dr. No cannot compete with The Excluded Exile
11 juli 2017 - Gepubliceerd op Amazon.com
Geverifieerde aankoop
Frank Butterfield has hit the ball out of the park with The Excluded Exile. As a long time fan of Ian Fleming, I would now say that Frank's series has reached the calibre of the James Bond series for great character development, sexual undertone, outstanding research....and a fun read. The best in the series so far!
Bravo, Frank!
Meer lezen
4 mensen vonden dit nuttig
Vertaal recensie in het Nederlands

bheath
5,0 van 5 sterren A slice of life
4 september 2017 - Gepubliceerd op Amazon.com
Geverifieerde aankoop
Mr. Butterfield's book are a delight, they are a mystery of sorts but they are also a look at life in the past. I have enjoyed his books and look forward to see what trouble Nick and Carter get into. Recommend all their stories.
Meer lezen
Vertaal recensie in het Nederlands
Ga naar Amazon.com om alle 14 recensies te bekijken 4,8 van 5 sterren
Terug naar boven
Over ons
Verkoop bij ons
We helpen je graag
© 1996-2020, Amazon.com, Inc. en dochterondernemingen