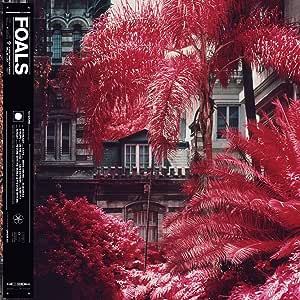 While the majority of their contemporaries have fallen by the wayside, Foals continue to hit new peaks. After more than a decade in the game, the band again embrace that love for the unconventional with the bravest and most ambitious project of their career: not one, but two astonishing albums: 'Everything Not Saved Will Be Lost'. A pair of releases, separate but related, they share a title, themes and artwork. Part 2 is released later in 2019. 'They're two halves of the same locket', frontman Yannis Philippakis explains. 'They can be listened to and appreciated individually, but fundamentally, they are companion pieces'.

A.R. Bergesen
5,0 van 5 sterren Beauty After the Apocalypse (4.5 Stars)
16 maart 2019 - Gepubliceerd op Amazon.com
Geverifieerde aankoop
A bit of a concept album, part one of a planned LP duology, "Everything Not Saved..." is a big step forward for Foals. Of the album's nine tracks (a 10th- Surf, Pt. 1- clocks in at under one minute) four are brilliant, three are very good, and two are better-than-OK. First, the brilliant. "Exits" is a sprawling dystopian indie-rock masterwork with a tight, slinky groove. "On the Luna" is a rollicking, guitar-driven banger. "Sundays" is beautifully sad, with a slow, pretty build, rapid-fire EDM-inspired bridge, gut-wrenching crescendo, and lovely denouement. "In Degrees" is a dance-tinged indie-synth rock gem, harkening back to the heyday of the early '90s, techno-inspired Manchester scene. For the very good, the aggressive chant-along chorus and fuzzed-out guitar of "White Onions". The marimba loops and high, plaintive vocals of "Café de Athens" out-Radioheads Kid A-era Radiohead. The wistful, apocalyptic finisher, "I'm Done With the World (& It's Done With Me)" makes the end of the world sound almost pretty. The last two tracks- opener, "Moonlight" and mid-album, "Syrups"- are by no means skip-worthy, but neither is nearly as tight or as captivating as the afore-mentioned songs. Overall, the album is masterfully produced- do yourself a solid and listen to it through high-quality headphones. The LP's sound is familiar Foals, but the totality of the work is markedly more progressive than the last two Foals albums. "Everything..." should captivate new Foals fans without alienating the old-school.
Meer lezen
11 mensen vonden dit nuttig
Vertaal recensie in het Nederlands

Autonomeus
3,0 van 5 sterren Several strong tracks and one to skip
17 mei 2019 - Gepubliceerd op Amazon.com
Geverifieerde aankoop
I just discovered the Foals when I saw them at Shaky Knees in Atlanta (May 2019). They were great live, distinguished by complex rhythms and West African-style guitar. Unfortunately this new album doesn't sound much like that at all.

The four strong tracks that make it worth hearing are: 1) Exits -- with a theme of catastrophic climate change, though lyrics are not the band's strong suit, 2) White Onions -- a very funky up-tempo number, 3) Syrups -- featuring a slow, ominous rhythm, and 4) Cafe D'Athens -- very propulsive, with a fast, tricky rhythm.

"In Degrees" and "On the Luna" are both fine but generic up-tempo dance numbers. The intro (Moonlight) and the outro (I'm Done With the World...) are both insubstantial, as is the brief "Surf, Pt. 1."

That leaves the track to skip -- "Sunday." This is Foals in their Coldplay style -- anodyne and so inoffensive as to be offensive. To add insult to injury, the lyric is nihilistic: "Through the flames & through the fire, Cities burn but we don't give a damn, Cause we got all our friends right here, we got youth to spend."

Now I wouldn't want to listen to this insipid song even if it had great lyrics, but seriously? Is it supposed to be cool to say "we don't give a damn" in the face of climate catastrophe?

I had hoped for better -- perhaps Part 2 will be more consistently strong.

Todd
5,0 van 5 sterren Amazing album
15 maart 2019 - Gepubliceerd op Amazon.com
Geverifieerde aankoop
I have every one of Foals' albums. This is a great addition. Every song is good. They seem to be trying new things and going a little further but it still has the Foals sound. I can't wait for part 2!
Meer lezen
5 mensen vonden dit nuttig
Vertaal recensie in het Nederlands