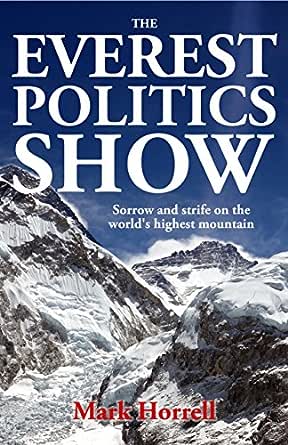 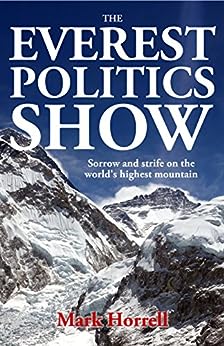 In April 2014 Mark Horrell went on a mountaineering expedition to Nepal, hoping to climb Lhotse, the fourth-highest mountain in the world, which shares a base camp and climbing route with Mount Everest.

He dreamed of following in the footsteps of Tenzing Norgay and Edmund Hillary, by climbing through the infamous ice maze of the Khumbu Icefall, and he yearned to sleep in the grand amphitheatre of Everest Base Camp, surrounded by towering peaks.

He was also intrigued by the media publicity surrounding commercial expeditions to Everest. He wanted to discover for himself whether it had become the circus that everybody described.

But when a devastating avalanche swept across the Khumbu Icefall, he got more than he bargained for. Suddenly he found himself witnessing the greatest natural disaster Everest had ever seen.

And that was just the start. Everest Sherpas came out in protest, issuing a list of demands to the Government of Nepal. What happened next left his team confused, bewildered and fearing for their safety.
click to open popover

Jamie L
5,0 van 5 sterren Avid armchair enthusiasts
2 augustus 2018 - Gepubliceerd op Amazon.com
Geverifieerde aankoop
I read just about every climbing book I can get my hands on, and I did really enjoy Mark's diary style writings here. I intend to try another of his writings. I read the reviews here before purchasing this and I have to say that at no point did I find Mark to be arrogant, but rather he is quite humble and considerate when giving his opinions. It saddens me to hear the direction Everest has moved to, and the attitudes of some of the newer generation of sherpas. Quite different from the accounts I've read in the golden read of Sir Hillary all the way to Vestiers & Hall. Interesting to know if the draw to Everest is decreasing due to these factors, but then again there is only one highest peak in the world....like moths to flames! Thank you Mark for sharing your experience for those of us who can't seem to find a way to step away from our daily rigors!
Meer lezen
Een iemand vond dit nuttig
Vertaal recensie in het Nederlands

flyxlsa
5,0 van 5 sterren Highly Recommend this new title!
28 november 2016 - Gepubliceerd op Amazon.com
Geverifieerde aankoop
As always, Mark gives us an excellent account of his experiences on the mountain - well, actually on the way to and at base camp in this case. I was anxious to hear about his experiences and first-hand account of one of the darkest days in the history of Everest climbing. An excellent read for climbers, those interested in the sport of mountaineering or trekkers who have been to or are thinking about going to Nepal.
Meer lezen
2 mensen vonden dit nuttig
Vertaal recensie in het Nederlands

Lewis Elder
5,0 van 5 sterren Excellent book
2 december 2016 - Gepubliceerd op Amazon.com
Geverifieerde aankoop
Excellent book, Mark. Interesting to get a first hand view of what really transpired at EBC from one persons perspective. I went up there ( to EBC) just about a month after the avalanche so this was of great interest to me, but aside from that, the book is written really well, and gives the reader the feeling that they are actually there witnessing the events as they transpire.
I look forward to reading this every night and actually have to tell myself to not read it too much otherwise I'll finish the book too quickly. It's rare to find a book that does this to me.

Stan
4,0 van 5 sterren A bilateral disaster
11 april 2019 - Gepubliceerd op Amazon.com
Geverifieerde aankoop
I liked the book very much, but through no fault of your own, it was stymied. I would have really liked to see you go from base camp to the summit and write about it. You have a gift so keep writing...I'll be reading.
Meer lezen
Vertaal recensie in het Nederlands