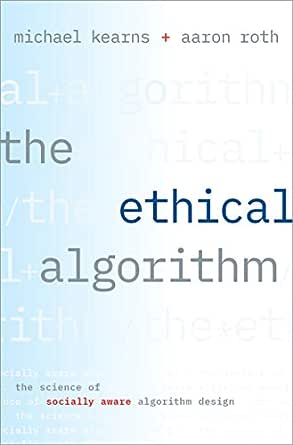 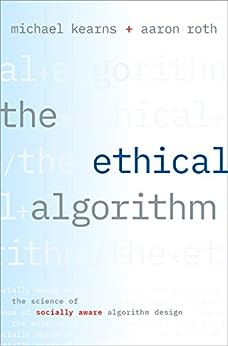 Over the course of a generation, algorithms have gone from mathematical abstractions to powerful mediators of daily life. Algorithms have made our lives more efficient, more entertaining, and, sometimes, better informed. At the same time, complex algorithms are increasingly violating the basic rights of individual citizens. Allegedly anonymized datasets routinely leak our most sensitive personal information; statistical models for everything from mortgages to college admissions reflect racial and gender bias. Meanwhile, users manipulate algorithms to "game" search engines, spam filters, online reviewing services, and navigation apps.

Understanding and improving the science behind the algorithms that run our lives is rapidly becoming one of the most pressing issues of this century. Traditional fixes, such as laws, regulations and watchdog groups, have proven woefully inadequate. Reporting from the cutting edge of scientific research, The Ethical Algorithm offers a new approach: a set of principled solutions based on the emerging and exciting science of socially aware algorithm design. Michael Kearns and Aaron Roth explain how we can better embed human principles into machine code - without halting the advance of data-driven scientific exploration. Weaving together innovative research with stories of citizens, scientists, and activists on the front lines, The Ethical Algorithm offers a compelling vision for a future, one in which we can better protect humans from the unintended impacts of algorithms while continuing to inspire wondrous advances in technology.
click to open popover

Lex Fridman
5,0 van 5 sterren An Important Book for Our Time
4 november 2019 - Gepubliceerd op Amazon.com
Geverifieerde aankoop
This is one of the must-read books on artificial intelligence. It offers new, powerful solutions to the challenges of algorithmic fairness, privacy, and ethics. As the authors state, "the science of ethical algorithms is in its infancy." This book is the first I've encountered (and I read a lot on the subject) that provides a definitive introduction to the science of ethical algorithms that is accessible to the general audience.
Meer lezen
12 mensen vonden dit nuttig
Vertaal recensie in het Nederlands

Mr. Underhill
5,0 van 5 sterren Accessible and clear!
16 januari 2020 - Gepubliceerd op Amazon.com
Geverifieerde aankoop
A pretty quick read that introduces the major uses of machine learning in the modern world, what problems are on the horizons, and what solutions may be possible
Meer lezen
Een iemand vond dit nuttig
Vertaal recensie in het Nederlands

Antoinette
5,0 van 5 sterren Essential Reading for Developers
1 december 2019 - Gepubliceerd op Amazon.com
Vine-klantenrecensie van gratis product( Wat is dit? )
If you're reading this, you probably know about the latest AI snafu with the Apple credit card. The algorithm is biased towards women. There are other incidents like this where algorithms have unintentionally biased results. How do we address this problem? This book is a great guide to understanding these biases and suggests methodology that can fuse human judgment with machine learning and system design. This book is like the tech equivalent of the HR seminars everyone has to take during onboarding. Understanding the pitfalls can help us make more socially aware algorithms.

Thanks so much for taking the time to read this review. I hope the information that I've provided makes your decision a little easier.

David Keymer
5,0 van 5 sterren WELL WORTH READING. LUCID AND ENGAGING
31 december 2019 - Gepubliceerd op Amazon.com
Vine-klantenrecensie van gratis product( Wat is dit? )
Kearns and Roth come exceptionally well equipped to address their daunting subject: can ethics be encoded into computer algorithms? Both teach computer and information science at the University of Pennsylvania and have consulted and written on machine learning, the design of computer algorithms and privacy issues, and algorithmic game theory. This short and lucid book, quite readable for the most part even for computer idiots like me, is not so much a study of the ethical implications of large data base mining by a computer as an attempt to show how –by what means—we can rein in the mining so that the results we get don’t cross ethical bounds. It’s not just an interesting subject for us. It’s an eminently practical one. Because computers, when let loose on sufficiently large data bases, can produce results that cross our moral sense.

The examples addressed are: privacy (how do we ensure the anonymity of individual respondents in the data base?); fairness (how do we prevent historically or societally skewed past data from contaminating present conclusions, which in turn lead to discriminatory action); false discovery in science research (e.g., Cornell nutrition scientist Brian Wansink, by data mining --running small sets of data from a much larger data base until he found one that yielded the conclusions he wanted-- eventually found contrary “ proofs” he could publish and use to advance his career). There is also the problem of clean data yielding sub-optimal conclusions (e.g., GPS systems in times of peak traffic).

What we don’t want is for our data searches to expose the identities of specific participants in, for instance, a large scale study of hospital data bases. Simply blanking out the participants’ names and the last two digits of their ZIP code –what is called k-anonymity-- doesn’t do it. Cross-referencing records from multiple hospitals and from census and other government records yields a surprisingly high rate of correct hits. A student at MIT found that using only birthdate, sex and zip code, one could identify 87% of the American population by digging through ancillary records like voter rolls, etc. Tell me, do you want health insurance providers to know your hospital record when you’re shopping for insurance? What about running for office and having it revealed that you’ve been treated for AIDS or have chronic heart disease? The authors find that maintaining confidentiality is the easiest of ethical problems to fix but it comes with a cost in data accuracy (clarity?).

Even fully anonymized data collection can yield counter-productive results, as the fitness tracking website Strava and the US military discovered in 2017. The military encourages soldiers to keep fit. Soldiers track it on their Fitbits. Uploaded onto Strava, these data revealed the most popular jogging paths of American troops in Afghanistan’s Helmland Province and may even have disclosed the location of secret military facilities. (Why are all these people running around out there when there’s nothing out there?) Another counter-productive result of data mining. During the 2017 rash of wildfires in California, some GPS systems steered escaping cars toward the conflagration, not away from or around it, because based on the system’s travel data, those were the most efficient roads to leave the area –under normal conditions, that is. It was just that these were not normal times.

Virtually every large player you can imagine –Netflix, Google, Facebook, the US Census Bureau—comes out with egg on its face in this arena.

The problem with fairness is that we don’t start on a level playing ground. Historical discrimination –redlining of minority applicants in the decision to make housing or business loans, coming up through inferior schools and having to compete for college admission against students who went to superior ones—bleeds into present decisions if we rely on historical data to guide us, most notably in our decisions about lending money or admitting students to school. Here, it is harder to eliminate historical bias but if you recognize the problem, you can introduce constraints in the reporting and decision process that will still allow you to use historical data to inform present decisions. It’s a balancing act: when lending money, lenders can’t afford to ignore past information about loan default and when admitting new students, colleges about past dropout vs. success rates. Kearns and Roth suggest ways past the problem but they’re more complicated and introduce a higher level of ambiguity to the decisions made. The authors discuss the embedding of bias in decisions made in regard to criminal sentencing, consumer lending, college admission, and hiring and promotion.

By this point in the book, we are talking about Pareto frontiers and Nash equilibria and the discussion gets more technical. It’s still readable, but …. Harder. Soon, in talking about false results in research, it‘s p-hacking. I understood that too but once I left the book, … not. That’s not a criticism of the book. Quite the reverse, it’s a sign that the authors are taking complicated computer and machine learning problems seriously and applying their considerable expertise to address issues. And it didn’t undermine the general comprehensibility of this thoughtful and helpful book.

You can tell how engrossing I found this book by the amount I’ve written about it here. We live in a data driven world. I, for one, would rather try to understand it than to bury my head in the sand and let whatever happens pass by over my head.
Meer lezen
3 mensen vonden dit nuttig
Vertaal recensie in het Nederlands
Ga naar Amazon.com om alle 13 recensies te bekijken 4,2 van 5 sterren
Terug naar boven
Over ons
Verkoop bij ons
We helpen je graag
© 1996-2020, Amazon.com, Inc. en dochterondernemingen