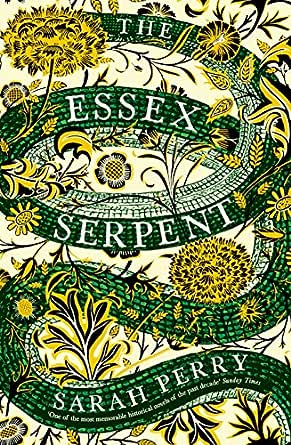 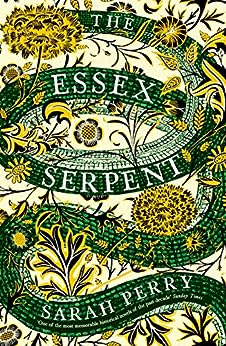 The Essex Serpent: The number one bestseller and British Book Awards Book of the Year (English Edition) Kindle-editie

"The vivid, often frightening imagery... and the lush descriptions... create a magical background for the sensual love story between Sarah and Will. Book-discussion groups will have a field day with the imagery, the well-developed characters, and the concepts of innocence, evil, and guilt."--Booklist (starred review)

"Dickensian in scope, depth, and exquisite use of language ... At once love story and mystery, deeply penetrating layered characters with wit and grace, The Essex Serpent reveals the mundane beast that spawned wild rumors, and the stranger, less easily unmasked beasts within us."--Historical Novels Review

"A blissful novel of unapologetic appetites, where desire and faith mingle on the marshes, but friendship is the miracle. Sarah Perry has the rare gift of committing the uncommittable to prose -- that is to say: here is a writer who understands life."--Jessie Burton, author of The Miniaturist

"For originality, richness of prose and depth of characterization is unlikely to be bettered this year ... one of the most memorable historical novels of the past decade."--Sunday Times

"Had Charles Dickens and Bram Stoker come together to write the great Victorian novel, I wonder if it would have surpassed The Essex Serpent? Sarah Perry establishes herself as one of the finest fiction writers working in Britain today."--John Burnside

"An exquisitely absorbing, old-fashioned page-turner...The Essex Serpent is shot through with such a vivid, lively sense of the period that it reads like Charles Dickens at his most accessible and fans of Jonathan Strange & Mr. Norrell will also find much to love."--Daily Express

"A Victorian-era gothic with a Dickensian focus on societal ills, Perry's second novel surprises in its wonderful freshness . . . [her] singular characters are drawn with a fondness that is both palpable and contagious, all making for pure pleasure."--The Observer

"The sumptuous twists and turns of Perry's prose invite close reading, as deep and strange and full of narrative magic as the Blackwater itself. Stuffed with smarts and storytelling sorcery, this is a work of astonishing breadth and brilliance."--Kirkus Reviews (starred review)

"In Perry's excellent second novel... a fatal illness, a knife-wielding maniac, and a fated union with the Essex Serpent will dictate the ultimate happiness of [the] characters. Like John Fowles's The French Lieutenant's Woman... this is another period literary pastiche with a contemporary overlay."--Publishers Weekly

THE SUNDAY TIMES NUMBER ONE BESTSELLER

Longlisted for the 2017 Baileys Women's Prize for Fiction

The Waterstones Book of the Year 2016

Shortlisted for the 2016 Costa Novel Award

London, 1893. When Cora Seaborne's controlling husband dies, she steps into her new life as a widow with as much relief as sadness. Along with her son Francis - a curious, obsessive boy - she leaves town for Essex, in the hope that fresh air and open space will provide refuge.

On arrival, rumours reach them that the mythical Essex Serpent, once said to roam the marshes claiming lives, has returned to the coastal parish of Aldwinter. Cora, a keen amateur naturalist with no patience for superstition, is enthralled, convinced that what the local people think is a magical beast may be a yet-undiscovered species. As she sets out on its trail, she is introduced to William Ransome, Aldwinter's vicar, who is also deeply suspicious of the rumours, but thinks they are a distraction from true faith.

As he tries to calm his parishioners, Will and Cora strike up an intense relationship, and although they agree on absolutely nothing, they find themselves at once drawn together and torn apart, affecting each other in ways that surprise them both.
The Essex Serpent is a celebration of love, and the many different shapes it can take.

Terry Lane
4,0 van 5 sterren Not what I expected but still good.
11 juni 2017 - Gepubliceerd op Amazon.com
Geverifieerde aankoop
No spoilers in this review. OK, so I was sooooo excited to get this book and I am a bit disappointed. But it isn't because it is a poorly written book. It is a good book, good writing, good characters -- it is just that the book jacket description does not match the book hardly at all. You need to know this so that you are not disappointed as I was. The book jacket makes the book sound like it is about a little village in Ireland where people are dying or missing and it is blamed on a mythical/historical sea serpent. A natural scientist, a woman named Cora, goes to the village to investigate. This is all somewhat true of the story, but the sea serpent part is really a background story and does not dominate the narrative at all. It's almost a second thought. If I could completely ignore the book jacket description, I would say that this book is about Cora, a female scientist in late 1800s London, and her relationships with men, her unhappy marriage, her lovers, her difficulties in relating to her odd son, her hopes and dreams. The story is more about relationships, love and loss, friendships, and less so about women's dreams during this time period. A great deal of the dialogue is about religion vs science but it is only lightly worked. There were not many scary parts, only tiny bits and pieces scattered here and there throughout the book. The characters are well defined and interesting, though I needed to keep a notebook with names and notes at first to keep them straight. I rarely like to have more than 4 characters in a book and this had several to keep track of. The situations were believable. I only want to point out that if you are looking for something a bit more magical, a bit more along the lines of cryptozoology with the possibility of a sea serpent or a tracking down of a sociopathic killer in a small Irish village, you will not find that here. The book jacket is misleading, which is not the fault of the author. It is however a wonderfully written and interesting book and I do recommend it to those who enjoy stories with interesting characters, especially of women who are challenging societal roles.
Meer lezen
412 mensen vonden dit nuttig
Vertaal recensie in het Nederlands

Ronald H. Clark
5,0 van 5 sterren Much more than just a story about a sea serpent
10 juli 2017 - Gepubliceerd op Amazon.com
Geverifieerde aankoop
This is a most unusual novel, and a very good one. Set in the Essex county in England, in about 1893, it provides an interesting view of late Victorian life and mores. The author is a native of this area and seems to have a real "feel" for it. The overall setting of the novel involves the strong beliefs of Essex inhabitants that a giant sea serpent is preying upon them, though direct proof is somewhat lacking. So one theme is how group psychology, much like the Salem witchcraft trials, can grip a local rustic community even though such beliefs are contrary to fact.

Another dimension involves the differing perspectives of well-off, educated Londoners v. the classic rural villagers whose way of life has changed little over centuries. The central character, Cora, while refined is also interested in Darwin, evolutionary theory, and hunting fossils. Having just read and reviewed "Darwin's Women" I was not surprised as to this aspect since I had learned that a great many women had helped Darwin by doing the legwork necessary to collect the specimens and fossils upon which his work was in part based. Placed in the environment of Aldwinter village, Cora encounters the local, classic British parson with his flock--much better educated than was typical but yet devoted to religious concepts. The two go at it on several themes which illustrates this transition that occurred in England in the late 19th century., as evolution ran up against established religious and social norms. Cora believes the serpent may simply be a "living fossil"; the parson believes it just hysteria which should be dismissed, even though his flock disagrees.

Another interesting dimension involves several characters who are involved in improving impoverished living conditions in London, but with little success. Also present is a most interesting surgeon who has inventive ideas about heart surgery which the local medical authorities are most reluctant for him to undertake. I was surprised a bit at this since much medical progress in reality had been made during this period, the Wellcome Hospital being just one example. The success of his techniques only brings him tragedy.

The title suggests another major theme--sort of a scary monster story or is it? The author resolves the mystery not once but twice, and does so in a most inventive way. In the end, all these issues seem to settle down, though Cora for all her perception and intellectual resources remains a widow, though a fulfilled one. The author's style is most seductive and the novel really draws the reader in and demands continued turning of its 418 pages. I read that the author had become seriously ill recently and may not write any more novels. This is a tragedy for her and a great loss for us if no further works emerge from her. So read this unique and innovative novel and enjoy her while you can.
Meer lezen
46 mensen vonden dit nuttig
Vertaal recensie in het Nederlands

AvisE
2,0 van 5 sterren No Gothic Thrills To Be Found Here
17 mei 2018 - Gepubliceerd op Amazon.com
Geverifieerde aankoop
Although well-researched with some lovely writing, this book was a real slog to get through. I just didn't connect with the characters or have any interest in the mystery of the Essex serpent. I feel the author tried to cover too many issues from the Victorian era and the constant head hopping was distracting. I was never sure what this book was meant to be about. The characters didn't act like real people and the conflicts didn't make much sense. I also found the universal passion for Cora quite annoying (and unjustified). Sarah Perry has tried to write it in the style and structure of a Victorian novel, but as a huge fan of this era's fiction, I was disappointed. Oh, and the 'debates' about religion vs science were superficial at best.
Meer lezen
28 mensen vonden dit nuttig
Vertaal recensie in het Nederlands

Clayton Curtiss
5,0 van 5 sterren An Astonishing Novel
21 juni 2017 - Gepubliceerd op Amazon.com
Geverifieerde aankoop
The Essex Serpent is everything you could want from a reading experience. The characters, especially Cora and Will, are drawn with such heart that they will live on in your dreams. The atmosphere of 1877 England is drawn at a moment of scientific discovery and wavering religious faith. Sarah Perry repays a close reading with sentences and passages that leap off the page, stopping you in your tracks and reaching for something to write on. And of course the whole notion of writing as expression and reflection comes out as the heart of this well-written, astonishing novel.
Meer lezen
38 mensen vonden dit nuttig
Vertaal recensie in het Nederlands
Ga naar Amazon.com om alle 432 recensies te bekijken 3,7 van 5 sterren
Terug naar boven
Over ons
Verkoop bij ons
We helpen je graag
© 1996-2020, Amazon.com, Inc. en dochterondernemingen