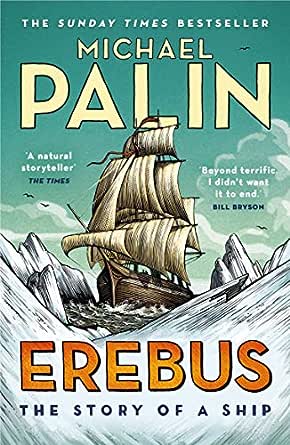 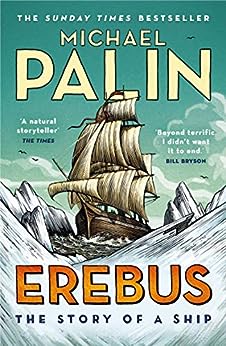 Erebus: The Story of a Ship (English Edition) Kindle-editie

In the early years of Queen Victoria’s reign, HMS Erebus undertook two of the most ambitious naval expeditions of all time.

On the first, she ventured further south than any human had ever been. On the second, she vanished with her 129-strong crew in the wastes of the Canadian Arctic.

Her fate remained a mystery for over 160 years.

BBC RADIO 4 BOOK OF THE WEEK

‘This is an incredible book . . . The Erebus story is the Arctic epic we’ve all been waiting for.’ Nicholas Crane

‘Thoroughly absorbs the reader. . . Carefully researched and well-crafted, it brings the story of a ship vividly to life.’ Sunday Times

‘A great story . . . Told in a very relaxed and sometimes – as you might expect – very funny Palin style.’ David Baddiel, Daily Mail

‘Magisterial . . . Brings energy, wit and humanity to a story that has never ceased to tantalise people since the 1840s.’ The Times

ichael Palin - Monty Python star and television globetrotter - brings the remarkable Erebus back to life, following it from its launch in 1826 to the epic voyages of discovery that led to glory in the Antarctic and to ultimate catastrophe in the Arctic.

The ship was filled with fascinating people: the dashing and popular James Clark Ross, who charted much of the 'Great Southern Barrier'; the troubled John Franklin, whose chequered career culminated in the Erebus's final, disastrous expedition; and the eager Joseph Dalton Hooker, a brilliant naturalist - when he wasn't shooting the local wildlife dead.

Vividly recounting the experiences of the men who first set foot on Antarctica's Victoria Land, and those who, just a few years later, froze to death one by one in the Arctic ice, beyond the reach of desperate rescue missions, Erebus is a wonderfully evocative account of a truly extraordinary adventure, brought to life by a master explorer and storyteller.

MinniesMom
4,0 van 5 sterren And now for something completely different
29 januari 2019 - Gepubliceerd op Amazon.com
Geverifieerde aankoop
Great read! Palin's research is obviously carefully done and his personal visits to sites documented in the story nicely fleshes out the history of the ship. Made it a personal, entertaining read. Dan Simmons' The Terror was both informative and exciting but fictional and supernatural---and scary. It lacked much of the factual information that Palin gives the reader. The AMC miniseries based on the Simmons book was a disappointment. Dark, creepy and, at times, confusing with poor sound quality. I was pleased to have Palin tell me a story that I had been drawn into after reading several books about polar exploration. And the terrific find of the remains of the Erebus in 2014 made this an even more worthwhile read. Need to find the Terror!
Meer lezen
3 mensen vonden dit nuttig
Vertaal recensie in het Nederlands

Tobygardener
5,0 van 5 sterren History that's very readable
3 oktober 2019 - Gepubliceerd op Amazon.com
Geverifieerde aankoop
This book is a real page turner, an exciting story and well told. The fact that the Canadian discovery of the Erebus is recent and ongoing, adds to the interest. The author Michael Palin does a great job in humanizing the characters. The illustrations and photographs are very interesting including the maps. I was constantly going back to the maps to track the voyages.
Meer lezen
Een iemand vond dit nuttig
Vertaal recensie in het Nederlands

-In the Clouds
5,0 van 5 sterren A history of Franklin’s lost ship HMS Erebus
15 oktober 2019 - Gepubliceerd op Amazon.com
Geverifieerde aankoop
If you read Frozen in Time by John Geiger and Owen Beattie published in the 1980’s then this book is the natural followup following discovery of the wrecks of HMS Erebus and HMS Terror in the last few years.
Michael Palin of Monty Python fame has left no stone unturned in his detailed quest to bring life to the story of the ships and their crew.

He describes the ships voyages on their expedition to Antarctica which made them famous before their ultimately tragic and mysterious disappearance into the Canadian Arctic, in search of the North West Passage.

A fascinating glimpse into the world of the last of the discovery age at the beginning of Queen Victoria’s reign.

Siegfried Lenz
4,0 van 5 sterren Interesting read, some of it very detailed, some drawbacks on Kindle
3 augustus 2019 - Gepubliceerd op Amazon.com
Geverifieerde aankoop
Michael Palin gives as detailed an account of the fate of Erebus, the Franklin expedition and the Antartctic voyage that preceded it as is possible given the end of Erebus. Descriptions of modern-day visits to various key locations add to the story. Reading on a Kindle I found it detracting that the maps are hard to decipher and not that convenient to refer to quickly to find out where exactly the island or channel just mentioned is located. The index is very detailed but a joke to use on the Kindle as it has been included verbatim and refers to pages of the book that are not referenced on the Kindle. Crew lists of the various expeditions would have made it a bit easier to look up the numerous persons.
Meer lezen
Vertaal recensie in het Nederlands

Kindle Customer
5,0 van 5 sterren More Than the Story of a Ship
20 maart 2019 - Gepubliceerd op Amazon.com
Geverifieerde aankoop
I don't know why Python writer Palin chose to write this but I'm glad he did. There is a strong sense of historical time and place. The building of the ship, the exploration of the Antarctic and the cast of characters on and around the ship make for gripping history. Then the story veers into an intense whodunit, a global search and ultimate haunting solution. I liked it so much I've bought copies for friends and family.
Meer lezen
Vertaal recensie in het Nederlands
Ga naar Amazon.com om alle 16 recensies te bekijken 4,6 van 5 sterren
Terug naar boven
Over ons
Verkoop bij ons
We helpen je graag
© 1996-2020, Amazon.com, Inc. en dochterondernemingen