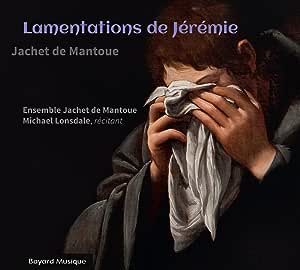 Gio
5,0 van 5 sterren Ma foi, c'est dans mon foie!
5 december 2011 - Gepubliceerd op Amazon.com
Geverifieerde aankoop
That's not a quotation from the notes of this excellent recording. It's a 'mondegreen' representing what I thought I heard in one of the readings by Michael Lonsdale of passages from the French translation of the Bible by Jacques Lefèvre d'Etaples, from 1530. Those readings serve the same function in this performance that liturgical plainchant serves in other recordings of the Lamentations. My ability to comprehend spoken French isn't what I'd like it to be, but I enjoy the sound of these brief readings as pure sound. Besides, something is needed to punctuate and prepare the ears for the rich density of Jachet's polyphony, lest it all clump together in one's musical memory. Each sectional setting of these Latin texts from the Lamentations of Jeremiah has its own polished harmonic and melodic integrity, though the "affect" of the music retains the same Apollonian serenity throughout.

Who was Jachet de Mantoue? A finer composer than you could possibly imagine before hearing this CD, the only available sample of his music. The previous reviewer, Maddy Evil, has done her/his usual fine job of summarizing what little we know about the composer, and I refer you to her/his words. The ensemble "Jachet de Mantuoe" patently thinks highly of the composer after whom they've named themselves, and I think just as highly of them. Why, I might name my first grandson Jachet, out of admiration for their singing! Ensemble Jachet de Mantuoe consists of five Frenchmen -- Raoul le Chenadec countertenor, Thierry Bréhu and Éric Raffard tenors, James Gowings baritone, and Philippe Roche bass -- all of whom have sung with other ensembles that I admire equally. Most of my admiration in recent years, for OVPP consorts singing polyphony, has been reserved for Dutch, German/Austrian, and Italian ensembles -- Egidius Kwartet, Stimmwerck, The Sound and the Fury, Cinquecento, to name a few -- and a can't think offhand of another totally Gallic OVPP ensemble that approaches the technical mastery of JdM. Their ensemble timbre is velvety, dark chocolatey, vintage Bordeauxy; the best French wines, it seems to me, strive for balance and finesse rather than distinctiveness, and that's the aesthetic of this ensemble. Their voices are beautifully matched, as if they were five of the same singer in different sizes like a consort of gambas.

Maddy Evil
5,0 van 5 sterren Breathtakingly beautiful...
14 juni 2011 - Gepubliceerd op Amazon.com
Stumbling by chance across this recording, you could be forgiven for assuming that it probably represents yet another foray into long lost repertoire by an insignificant composer. In reality, however, Jacquet of Mantua (1483-1559) was actually one of the most distinguished composers of sacred polyphony in the generation between Josquin and Palestrina, with a vast output comprising 23 masses, over 100 motets and many other sacred works (including a St John Passion). Sadly, Jacquet's music is still virtually impossible to obtain on CD, a fact which makes this exquisite release even more special. If you are new to the names of this composer and this group, you are in for a treat! (n.b. for sound samples and full track listing details, see the French amazon site).

Established in 2000, Ensemble Jachet de Mantoue comprises five singers: Raoul le Chenadec (countertenor), Thierry Bréhu and Éric Raffard (tenors), James Gowings (baritone) and Philippe Roche (bass). As their name implies, they have a special affinity with the music of Jacquet of Mantua (listeners should also investigate their magnificent performance of Jacquet's  Messe Anchor che col partire et motets à Notre Dame  [Calliope CAL 9310]), although they have also released noteworthy recordings of other Renaissance composers, of which the Missa de Beata Virgine by Cristóbal de Morales (c.1500-1553) [Calliope CAL 9363] is a particularly fine example (although apparently unavailable in the US, it is listed on other amazon sites). Individually, the members of Ensemble Jachet de Mantoue have sung with several important early music ensembles - Diabolus in Musica, Ensemble Clément Janequin, La Chapelle Royale and Le Parlement de Musique amongst them. For this recording, they are joined by Michael Lonsdale, who narrates sections from the French translation of the Bible by Jacques Lefèvre d'Etaples ('La Sainte Bible en françoys', Antwerp, 1530).

As for Jacquet of Mantua himself, surprisingly little is known about him considering the importance of his output. His real name was Jacques Colebault, although he was known by a variety of names - Jachet, Jachetto, Iachettus or Giachetto (a fact which has occasionally resulted in the confusion between him and a few other composers, especially Jacquet de Berchem [c.1505-1567]). Most of Jacquet's life was spent in Mantua, where from 1526 he worked in the service of Cardinal Ercole Gonzaga, eventually as 'maestro di cappella' at the Cathedral of San Pietro (from 1534). The choir there was relatively large (15 singers) in comparison with the norm of 12 singers found elsewhere in northern Italian cathedrals, although surviving information is insufficient to determine exactly how the voices were distributed (even if we know something of their duties and where they performed, etc. - for more information on this topic, see Iain Fenlon, 'Music and Patronage in Sixteenth-century Mantua', Cambridge, 1980). Given what is known about performance practice in other parts of Italy, though, Ensemble Jachet de Mantoue's decision to use solo voices (OVPP) seems entirely appropriate here, especially for a setting of the Lamentations. Like much of his output, this work (published posthumously in 1567) is dominated by smoothly arched melodies and a careful balance of all parts, reminiscent of the music of his predecessor Jean Mouton (c.1459-1522) as well as a few other settings of the Lamentations text (like the one by Elzéar Genet Carpentras [c.1470-1548] in Cappella Sistina MS 163).