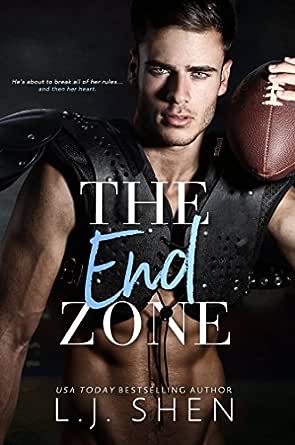 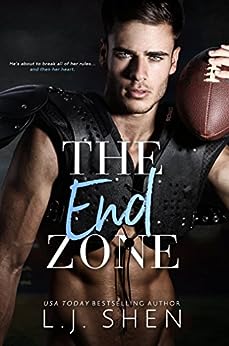 Jolie Louis is a smart girl.
She knows that her best friend, Sage Poirier, is a bad idea.
He’s a walking, talking cliché. The Adonis quarterback with the bulging biceps and harem of fangirls trailing behind him on campus like a stench you can’t get rid of.
Sadly, that’s also the reason she can’t stay away from him.
Well, that and the fact that they’re roommates.
Jolie is already straddling the line between friendship and more when Sage comes to her with an offer she cannot refuse: be his fake girlfriend and live for free for the rest of the semester.
She tells herself that she can handle it.
He’s just the boy she saved ten years ago, right?
Wrong. So very wrong.
He is a man now, and she is his captive Heart, body, and soul…

The End Zone is a novella, originally published as part of the Team Player anthology. The End Zone now includes an extended epilogue for your enjoyment.

Amy Halter- The Obsessive Book Whore
5,0 van 5 sterren 5 Stunning Stars
5 april 2018 - Gepubliceerd op Amazon.com
This audio was freaking fantastic! It was sexy and angsty and I couldn't get enough! Jolie and Sage were perfect for each other. She was so sweet and I loved that their childhood friendship grew into something more over time. It was beautiful to see how loyal they both were to that friendship. The narrators were both phenomenal and definitely made me feel the characters through their stellar narration! It was a short listen because it was a novella but sooo worth the listen and at a great price.
Meer lezen
64 mensen vonden dit nuttig
Vertaal recensie in het Nederlands

S.Shade
5,0 van 5 sterren Five Stars!
4 april 2018 - Gepubliceerd op Amazon.com
Geverifieerde aankoop
I swear to all that is holy L.J. Shen can not write a bad story. Everything and I mean EVERYTHING she writes is reader crack, and I am still suffering from this book high!

This novella had so much packed into so few pages. I loved the push and pull between Sage and Jolie. You could feel the connection between the two. The friendship and the love. They had a great backstory and an even better present.

Sage was such a great character for me. I loved how flawed he was. And what intrigued me even more was the fact that he knew it and just did not give a f***. Jolie was the perfect girl to compliment him, she accepted his faults and still loved him no matter what.

I can not stress enough how great this novella was!

Before starting this, I should preface this by saying this is a novella. I was so excited to start reading this, that fact just kind of blew over my head. It was originally a part of The Team Player Anthology.

Now, with that out of the way, The End Zone was incredibly good. Not that I ever had any doubts, because it was Leigh Shen, but sometimes you never know. The End Zone is a sexy friend to lover’s romance with a smattering of ‘fake’ relationship thrown in. All around, WIN WIN WIN!! Leigh knows how to write about sexy, brooding male heroes and this one is no exception.

Sage and Jolie (JoJo) have known each other since they were kids (about ten years old), when Sage moved into the house next door to Jolie. Night after night, Jolie saw a boy her age frustrated, angry and sad with his surroundings. One night, she couldn’t stand to see him in pain anymore and decided to run to him. That is the beginning of their story.

Present day, Sage and Jolie are seniors in college. Sage is a brooding, cocky, know it all manwhore. He is the rising quarterback that is headed off to the NFL, but where does his relationship with Jolie go? Jolie is a studious, super sweet girl that has been harboring feelings for her best friend. Things change on one fateful night that involves Jolie and a bathroom and a lightbulb moment in Sage’s head.

This book, even as a novella, is everything. I loved that interaction between Sage and Jolie, from friendship at the beginning to more. I would LOVE more of these two, but given that it’s written by Leigh, I would always want more. There friends to lover’s romance is written extremely well, although slightly fast paced. This is strictly due to the nature of the book, a novella. There are SO many goodies in this book, that I can’t talk about, but will say we get multiple HEA epilogues and not necessarily all concerning Sage and Jolie. Do yourself a favor and pick this hot, spicy, funny and sweet little read up. There are so many great hilarious quotes in this book it will have you chuckling! Leigh Shen does not disappoint.

“If he were any other guy, I’d be all over him like a rash after a torrid Vegas vacation.”

“…considering how Sage’s dick has been passed around like community property. I’m surprised he’s not partly funded by the government.”

F.B.
2,0 van 5 sterren Not worth reading
8 april 2018 - Gepubliceerd op Amazon.com
Geverifieerde aankoop
This was a short story about a romance that happened within a blank of an eye. It went from Sage and Jolie as children in the first couple of pages to them being roommates in college. It didn't give me a reason why they became best friends and why either one of them are set in their ways. As the story continues, we find out Sage is a man whore who slept with every female on campus and Jolie knows this. She fantasizes about being with Sage despite knowing this. To make a long post even shorter, Sage suddenly has a wake up call and wants to only be with Jolie after she's interested in his teammate. Jolie gives in and then they live happily ever after.
Meer lezen
11 mensen vonden dit nuttig
Vertaal recensie in het Nederlands

mjlovestoread
5,0 van 5 sterren A most wonderful friends to lovers romance!!
4 april 2018 - Gepubliceerd op Amazon.com
Geverifieerde aankoop
What can I say? LJ Shen can write the cockiest of arses and make me fall in love each and every time. And in The End Zone, Sage Poirier is the most self-assured quarterback I've ever read about but thankfully his bestie, Jolie Louis, keeps him grounded. Sharing secrets from when they were both 11 years old and Sage's home life was anything but stable, these two have remained close and now live together while attending college. They've never crossed the line into 'more than friends' but with Sage's future as a pro-baller practically in his hands, decisions about he and his JoJo quickly change and these two are now dancing around the prospect of a future. Together.

Sage is the man about campus and Jolie is the only woman who keeps him at arm's length. I loved their spirited banter and because this is a novella, the author put us out of our misery faster than normal and had these two becoming much closer in less time. It was great to see Sage make the first move, as he had to wear his heart on his sleeve to prove to his girl that they could actually be together long after college was over. Full of himself but still that frightened little boy in the rain, Jolie is the only woman who knew his heart and could capture it with the snap of her fingers. She is the consummate southern girl who loves with all that she is and will protect those she deems worthy.

Their back and forth which ultimately leads to some sexy times and heartfelt confessions was such a joy to read. LJ Shen has made the cocky manwhore her specialty and honestly, no one does it better. By the end, I'm just as enamored as the heroine. There seems to be no way around it and I for one couldn't be happier.