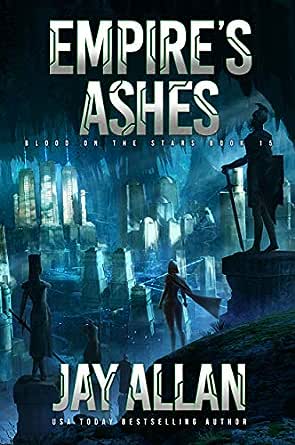 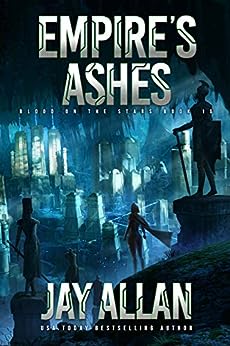 Tyler Barron is about to lead his fleet into a trap. He is sure the enemy is laying in wait, but he has no choice. After four years of unexpected calm along the front line, the Senate and the Hegemonic Council are demanding action, and the Pact’s commanding admiral has no choice but to set out on a mission to liberate the enemy-held regions of the Hegemony.

While Tyler prepares for an offensive he believes can only end in disaster, Andi Lafarge is preparing to continue her quest for the mysterious weapon the doomed empire used to defeat the Highborn centuries before. That search has largely been one of combing through old data and artifacts…until now. Andi’s path leads into the region of the Hegemony now know as Occupied Space, right past the Highborn defenses, to the shadowy and mysterious coreward regions of the old and fallen empire, and the ancient imperial capital itself.

The fleet will fight, struggling for a victory that may be out of reach, but even as they risk all, a new threat is growing, one far in the rear, along the regions of Confederation space that have been stripped of their defenses to support the war effort. The danger is real, and it is deadly. Tyler Barron and his spacers could see their home space invaded and destroyed, even as they fight for to achieve victory hundreds of lightyears away.

Blood on the Stars

The Andromeda Chronicles (A Blood on the Stars Trilogy)

Jeanne E.
3,0 van 5 sterren Endless. Hopeless. Desperation.
5 december 2019 - Gepubliceerd op Amazon.com
Geverifieerde aankoop
Billions of humans in the Union. Billions of humans in the Confed/Rim worlds. Billions of humans in Hedgemony. All of them enslaved in some way. Economically, politically, genetically, tyrannically. Only the Alliance / Palatia have thrown off the shackles. Now with the Pact they all have to somehow avoid that horror of a physical psychic and soul breaking collar.
I have enjoyed the early exploits of Tyler Barron and Andi LeFarge, Holsten and numerous others while fighting the Union and the deadly Section Nine. Back when there were personalities and possible resolutions. Over the last several books, however, it has just been so DEPRESSING. I cannot conceive that there aren’t more successful rebellions against these evil power mongers. I can see that happening to a country ... not entire galaxies! I get that this collar could make this happen, but the Others just came upon the scene. I’m having trouble reconciling the entire scenario and premise.
I have grown to love the main characters especially Atara Fritz Winters Sonya Tulus all of Andi’s team, Akella Chronus Ilius, but most specially Jake and all the fighter pilots. I couldn’t even review the last book when he ended up with the Highborn. It seems like all the personalities of all the humans just got lost in the horror. This is not an exciting enjoyable space opera any longer. I didn’t even read the first 80% of the book thoroughly. I had to skim pages because there was no dialogue to keep my heart involved. Battle after battle, loss after loss. Endless. Hopeless. Desperation. I feared I could not continue until the last 20% of the book. Hmmmm. I am giving 3 stars because I am a loyal fan but my heart gives only 2. I really need to see some return to the positive human characters and resolution of the plot dilemmas. I know Andi will do her thing and I now have some hope for Jake but I really don’t want to vicariously live through such despair again. Trying to be the same avid fan I always was.

Todd H
3,0 van 5 sterren Empires Ashes
6 december 2019 - Gepubliceerd op Amazon.com
Geverifieerde aankoop
I have loved reading Jay Allen novels. But I’m sorry to say Empires Ashes seriously disappointed me. I gave it three stars simply because the series itself has been so good to this point. However this particular read struck me as nothing more than filler. As if the author is dragging out the series in order to capitalize on it and needs to fill 300 or so pages.

There’s only so much one needs to hear about how torturous the collar is to Jake Stockton or how hard he fights it. Or how miserable Tyler Barron would be without Andi and Cassie and vice versa. Or how much they both struggle internally as one goes off on yet another forlorn mission with little chance of success or survivability. Yet that’s what we get, page after page of each character suffering and struggling with rage, grief and loss repeated over and over ad nauseam. They also never, ever sleep and work themselves to such an exhaustive state that it’s a wonder they function at all, much less when the battle rages. In the real world people who don’t sleep for days at a time end up psychotic, not heroic.

Come on Jay, we get it! They’re all on the edge and suffering horribly as they struggle to survive. Let’s get on with the story at hand.

I bought this book with great anticipation yet 3/4 of the way through I had to force myself to keep reading it which is something I never thought I’d say about a Jay Allen book!

This book wasn’t that good and the author can do so much better. I know he can because I’ve read his other series. I want more science fiction and less drama from the characters.

Catherine Mackay
5,0 van 5 sterren Beyond Awesome Series :)
24 december 2019 - Gepubliceerd op Amazon.com
Geverifieerde aankoop
Yep, giving this latest entry in to the Blood on the Stars series another 5 stars - I just can't get enough of this gut wrenching series and its indomitable heroes. Yes, I just cried buckets at thought of Jake Stockton, ace pilot captured and forced to wear the Collar, becoming one of the many slaves of the Highborn. In Empire's Ashes my heart wrenched at how hard Jake tried and failed to fight against the Collar - can't help but empathise at the cost to the human soul to do things you wouldn't ordinarily do and be forced to watch yourself fawning over the Highborn and killing people you know, while a part of yourself is railing against what your doing - it must be tortuous. And the bleakness just continues as Villeneuve stabs humanity in the back.....again, but on the bright side karma does come back to bite him seriously in the butt. The walls are certainly closing in on the Confederation and the Alliance and readers may be forced to wonder if it will survive. But never fear, hope springs eternal as the saying goes and given how amazing these characters are, I have hope that things will work out - maybe Tyler and Andi can retire to some quiet place, raise their daughter and live happily ever after, lol :)
Jay continues to bring to life a future where war and blood is painted amidst a back drop of worlds where the competing factions of humanity fight for control of greater territory and resources. On every horizon there seems to be a greater threat - for the Confederation it was the Union, for the Hegemony it was the Others (the Highborn) and we are learning the latter are battling an unknown foe along their borders. As Jay expands his universe, there is always a bigger threat out there to Humanities continued existence and it isn't until they work together do they find the will and hope to fight against the bad. After all, Humanity is much stronger when it is united - at least that's my take on the entire series to date. So looking forward to the next book in the series with the greatest anticipation :)

Jon
3,0 van 5 sterren Good read, needs much more thorough editing
16 december 2019 - Gepubliceerd op Amazon.com
Geverifieerde aankoop
I truly love this series by Jay Allan, but have really struggled to read "Empire's Ashes." There are countless inconsistencies with previous books and it was obviously rushed out to keep up with his pace of publishing. This has been a theme over the last 4-5 books in the series, but Empire's Ashes is the first one where it became difficult to read due to these inconsistencies and editing mistakes. Jay Allan, please find a new editor for the completion of this saga. It is a story worth telling, but your editors are not doing you any favors by rushing to publish.
Meer lezen
3 mensen vonden dit nuttig
Vertaal recensie in het Nederlands
Ga naar Amazon.com om alle 76 recensies te bekijken 4,4 van 5 sterren
Terug naar boven
Over ons
Verkoop bij ons
We helpen je graag
© 1996-2020, Amazon.com, Inc. en dochterondernemingen