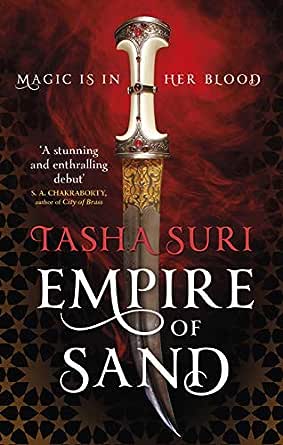 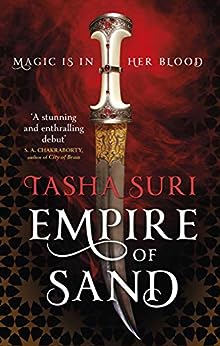 "A darkly intricate, devastating, and utterly original story about the ways we are bound by those we love."--R. F. Kuang

"Empire of Sand draws you into an intricately realized world of blood and secrets. An arresting and magical history told through the eyes of an indomitable heroine. I cannot ask for more."--Jeannette Ng

"An oasis of a story that you fall into, head-first. A mesmerizing tale full of magic and mystery."--Sayantani DasGupta

"Riveting and wonderful! A fascinating desert world, a compelling heroine, and a richly satisfying conclusion. Empire of Sand will sweep you away!"--Sarah Beth Durst

"A stunning and enthralling debut, Empire of Sand thoroughly swept me away. With wonderfully lyrical prose, Suri deftly balances fantastic world-building with a nuanced exploration of family ties and the lengths one will go for love. A quiet, powerful and unexpected love story set in a crushing world of magic and tyrants, Empire of Sand is a gripping tale of survival I'll be recommending for a long time!"--S. A. Chakraborty

"Empire of Sand is astounding. The desert setting captured my imagination, the magic bound me up, and the epic story set my heart free."--Fran Wilde

"A powerful story of empire, magic, and resistance, told with an intimate poignancy and emotional resonance."--Rowenna Miller

"A lovely dark dream full of wrenching choices and bittersweet triumph. This gorgeous, magic-woven story and its determined heroine spin hope from hopelessness, power from powerlessness, and love from desolation."--Melissa Caruso

"The best fantasy novel I have read this year. I loved it!"--Miles Cameron

'Empire of Sand thoroughly swept me away'
S. A. Chakraborty, author of CITY OF BRASS

'A darkly intricate, devastating, and utterly original story about the ways we are bound by those we love'
R. F. Kuang, author of THE POPPY WAR

Mehr is a girl trapped between two cultures. Her father comes from the ruling classes of the empire, but her mother's people were outcasts, Amrithi nomads who worshipped the spirits of the sands.
Caught one night performing these forbidden rites, Mehr is brought to the attention of the Emperor's most feared mystics, who try to force her into their service by way of an arranged marriage. If she fails in their bidding, the gods themselves may awaken and seek vengeance...

From British debut author Tasha Suri, Empire of Sand is a lush and beautiful tale set in a magical world inspired by medieval India.

'Draws you into an intricately realised world of blood and secrets. An arresting and magical history told through the eyes of an indomitable heroine. I cannot ask for more' Jeannette Ng

'The best fantasy novel I have read this year' Miles Cameron

Robert Lee
4,0 van 5 sterren A very impressive debut
26 november 2018 - Gepubliceerd op Amazon.com
Geverifieerde aankoop
I am beginning to think that we are at a new golden age of fantasy literature. I grew up on a steady diet of Tolkien, Terry Brooks, Stephen Donaldson, and too many Forgotten Realms novels than were healthy for me. Between Tolkien, the D&D world of Forgotten Realms and Robert Jordan’s Wheel of time, the worlds were imaginative yet had a lot of similarities to each other. These were tropes I grew up on and always went back to because they were familiar territory and easy enough to jump into. They were also influenced by many of the same Euro-Nordic and Celtic myths. As much as I love those, it is incredibly refreshing when something new comes along or in some cases something that is from a perspective based a different on history and myth

Tasha Suri’s debut novel Empire of Sand is a book influenced by the Murghal Empire without being a book about the Mughal Empire. It stands in its own universe of myth and lore. The world that she creates is very well realized, both epic in it’s scope yet is a personal journey. It’s use of magic is believable in not only that world but seems like it would have worked in ours a long time ago. The magic rituals seem to be based on Indian classical dances, mainly the Bharatanatyam.

Mehr is the privileged daughter of the Governor of Jah Irinah who serves under the auspices of not only the Emperor, but of the godlike Maha who is the real power behind the Ambhan Empire. His mystics pray for the fortunes and prosperity of the empire and or misfortunes of their enemies. Yet as privileged and sheltered as she is, she is an outcast in her own palace. her heritage is only half Ambhan as her mother was of a race considered barbarous, the Amrithi. Her mother, rather than let vows bind her to her father, she left to join her people out in the desert not to be seen again. Though Mehr is an outcast, her younger sister Arwa has been taken under the wing of Maryam, their step-mother. Yes, there is a (sort of) wicked step-mother. What mainly alienates her from everyone is that Maha still chooses to follow the ancient rites of her people such as ritual dances and the belief in daivas, djinn like creatures descendant from the gods.

It is not only beliefs but the power that manifests when she performs the ancient dances that draw the attention of the Maha’s mystics. They come to her father with an arranged marriage proposal. By tradition she has the right to turn down the proposal and her father advises so. but it is not a good idea to turn down the mystics, so to save not only her family’s honor but heir lives, she chooses to marry a servant of the Maha.

What will follow is the revelation of the truth behind the Maha’s power and his monstrous personality. Mehr’s journey becomes our journey as it is her point of view we follow except for a couple of brief chapters. Her journey is a personal one where she discovers the strength of the powers hidden within her rituals and power of vows that are truly binding. With all that going on, the foundation of the story and her motivations is a love story between her and Amun, the Amrithi man whose vows to the Maha and his mystics practically make him their slave.

Ms. Suri’s world building hints at a deeper and richer history than we are presented with. And that is a good thing. The illusionist’s best trick is leaving the audience wanting more. Since this is the beginning of a series (but the book can stand on its own) we can expect more of the mysteries of this world to open up on us. What we do get revealed to us is a world where the dreams and nightmares of sleeping gods can shape the very fate of an empire.

I cared a lot for Mehr’s struggles whether they be mundane ones or life threatening ones and found her to be a strong heroine who has to grow stronger as the world crumbles around her. There are moments of violence and physical abuse in the book that may be unsettling to some but it is never exploitative.

This is a highly readable book with relatable characters and I can’t wait to get to the next installment.

Current editions of Empire of Sand contain an interview with the author and a preview of the folow-up book Realm of Ash. I originally received an advanced copy through NetGalley but went ahead and purchased the book to suppor the author.
Meer lezen
35 mensen vonden dit nuttig
Vertaal recensie in het Nederlands

Calvin Park
5,0 van 5 sterren An Achingly Beautiful Epic
4 januari 2019 - Gepubliceerd op Amazon.com
Geverifieerde aankoop
Tasha Suri’s Empire of Sand is an achingly beautiful novel of identity, pain, and dreams wrapped in a fabulously realized south Asian inspired secondary world. This story makes you feel the experiences the characters have. Both the setting and characters are brilliantly imagined and feel real in a way that is difficult to articulate. There will be moments when your heart breaks and moments when you thrill with hope.

There are three elements of Empire of Sand that I can’t get out of my head: the characters, the setting, and the magic system. Mehr, our protagonist, is the daughter of the governor of Irinah who has led a somewhat sheltered life. In the midst of this sheltered life, however, she has developed a very strong character. She knows what is right and wrong and acts on those feelings even when it may not be to her benefit to do so. Because the vast majority of the book is from Mehr’s perspective we spend a great deal of time in her head but this doesn’t become tiresome. The character is very well written and it was easy to root for her. Sometimes, when a book is almost entirely in one character’s head, the side characters can feel flat. That isn’t the case in Empire of Sand. Suri has given us not only a main character we can relate to and hurt with, but an entire cast of characters with their own motivations and foibles. Each of them feels alive. In fact, this novel works so well because of the relationships between characters. Of course, the relationship between Mehr and various antagonists is important, but her relationships with various side characters are part of what makes this novel so achingly beautiful. In addition to the characters, the setting and magic helped me fall in love with this book. You won’t find castles and western feudal lords in this novel. Instead, it’s inspired by Mughal India. Suri has crafted a secondary fantasy world that really shines. Perhaps most impressive, the world and magic are linked in a way that helps both to come alive. The mythology of the world is linked into the magic system and vice-versa and it all comes together in a way that is complex without feeling overly complicated. I tend to enjoy novels where magic plays a large role in the plot and where the magic system is less mysterious and more scientific, so-called hard magic systems. In her debut, Suri has managed to craft a system that is fascinating and interesting, but still very much mysterious. I loved it.

There were few things that didn’t work for me in Empire of Sand. One of those few things, however, was that on a very few occasions I was frustrated by characters’ seeming inability to protag. Because of the plot, Mehr finds herself often reacting to events, rather than making events happen. There was a particular section of the novel when I felt the story would have benefitted from more agency for Mehr. This was especially irksome because everything else was executed so well. There were a couple scenes in particular when I grumbled in my head about this, but on each of those occasions I was quickly swept back into the narrative.

Alternatingly grim and hopeful, Empire of Sand is a novel that shouldn’t be missed. This is character-drive fantasy with epic stakes set in a fascinating and unique would that makes you ache for characters as you come to love and understand them. I am eagerly anticipating the sequel. 4.5/5 stars.

5 – I loved this, couldn’t put it down, move it to the top of your TBR pile
4 – I really enjoyed this, add it to the TBR pile
3 – It was ok, depending on your preferences it may be worth your time
2 – I didn’t like this book, it has significant flaws and I can’t recommend it
1 – I loathe this book with a most loathsome loathing
Meer lezen
15 mensen vonden dit nuttig
Vertaal recensie in het Nederlands
Ga naar Amazon.com om alle 117 recensies te bekijken 4,5 van 5 sterren
Terug naar boven
Over ons
Verkoop bij ons
We helpen je graag
© 1996-2020, Amazon.com, Inc. en dochterondernemingen