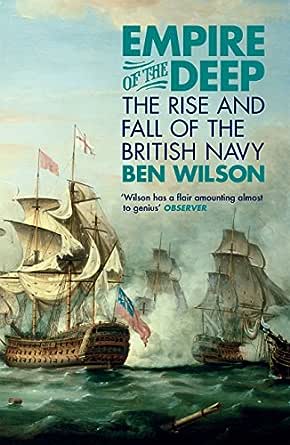 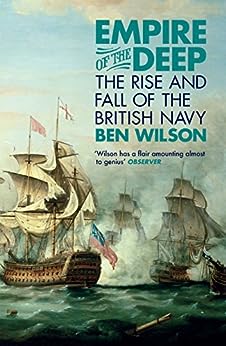 Empire of the Deep: The Rise and Fall of the British Navy (English Edition) Kindle-editie

The bestselling complete history of the British Navy - our national story through a different prism.

The story of our navy is nothing less than the story of Britain, our culture and our empire. Much more than a parade of admirals and their battles, this is the story of how an insignificant island nation conquered the world's oceans to become its greatest trading empire. Yet, as Ben Wilson shows, there was nothing inevitable about this rise to maritime domination, nor was it ever an easy path.

EMPIRE OF THE DEEP: THE RISE AND FALL OF THE BRITISH NAVY also reveals how our naval history has shaped us in more subtle and surprising ways - our language, culture, politics and national character all owe a great debt to this conquest of the seas. This is a gripping, fresh take on our national story.

daltonknox
5,0 van 5 sterren Royal Navy
14 november 2019 - Gepubliceerd op Amazon.com
Geverifieerde aankoop
Manages to get through a huge amount of information and still make it an enjoyable read. The early history of the RN was news to me.
Meer lezen
Vertaal recensie in het Nederlands

Oldjazzman
5,0 van 5 sterren Recommended.
30 juli 2015 - Gepubliceerd op Amazon.com
Geverifieerde aankoop
A well-researched (it seems to me at least) history of Britain's one-time powerful position in the world, enabled by a large and efficient Navy. Until the submarine and aircraft were invented! The naval decline is quick, short, and sad. Well written, humorous in places, and useful discussions on politics too. Recommended.
Meer lezen
2 mensen vonden dit nuttig
Vertaal recensie in het Nederlands

Alex Wardrop
4,0 van 5 sterren A window into the English soul
16 januari 2014 - Gepubliceerd op Amazon.com
Geverifieerde aankoop
I was unsure of what to expect since previous books that I have read on Royal Navy exploits have been much more focussed. This book places the Royal Navy in the context of the development of Britain. I was most interested in the pivotal role that the Falklands War played in defining a continuing role for the Royal Navy
Meer lezen
Een iemand vond dit nuttig
Vertaal recensie in het Nederlands

Amazon Customer
5,0 van 5 sterren Simply Superb.
27 oktober 2013 - Gepubliceerd op Amazon.com
Geverifieerde aankoop
Even to an amateur Historian like myself, this was Historic storytelling at its finest. I have always known about the greatness of the Royal Navy; and the contribution its existence has made to our World. There are many parallels to be drawn between it, and its successor - The United States Navy - today.

This book demonstrates the vital importance that control of the great waters gives to any Nation - and the cost to those who come second.

The Royal Navy, for most of its History little better than legalised pirates, put the Great into Great Britain. Morality plays no part in the affairs of Nations, guts - and guns - do.