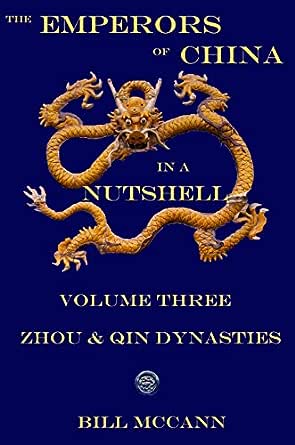 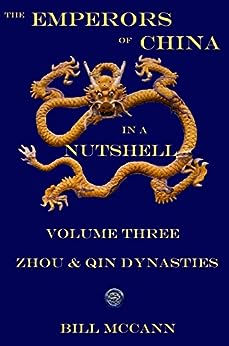 The Emperors of China in a Nutshell Volume 3: Zhou and Qin Dynasties (English Edition) Kindle-editie

Paper, the umbrella, gunpowder, the compass, porcelain, the civil service, silk, printing, ice cream, football and pasta. These and much else were first given to the world by China.
She also has longest continuous civilisation the world has ever known, stretching back for more than 4,600 years. For a little over 4,500 of those years she was ruled by a single emperor. Her history under those emperors stretches from the end of the New Stone Age, through the Bronze and Iron Ages right down to the early 20th century.
We are fortunate that the Chinese began to keep detailed records of the lives of the emperors and events in their reigns from an early date. The first reliable written records in China appeared more than 3,200 years ago. For the 1,400 years before that, we have the records of an oral tradition which was written down at a later date.
The period covered by this third volume in the Nutshell Series on Chinese Emperors covers the first two dynasties in what we can call recorded history. They are both the longest and one of the shortest of the dynasties, but between them they defined the basics of Chinese culture, politics and civilisation that are still alive and well in Modern China.

JHerz
1,0 van 5 sterren Self righteous quack
19 april 2017 - Gepubliceerd op Amazon.com
Geverifieerde aankoop
Writer took the liberty of presenting his religious views as fact and compared Jesus Christ as a "fictional character" when comparing him to ancient Chinese gods. Also- his interpretation of Chinese words and phrases were not translated properly and did not always reflect the same intent as the phrase does in its original language. He wasn't able to seperate fact from personal belief and the text is polluted with his personal garbage. It could have been a great read. I was very disappointed.
Meer lezen
Vertaal recensie in het Nederlands