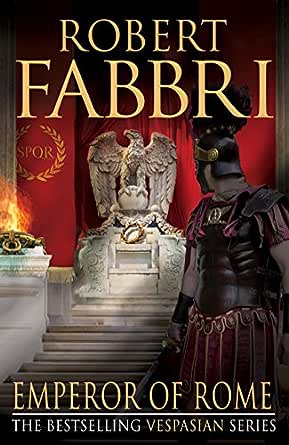 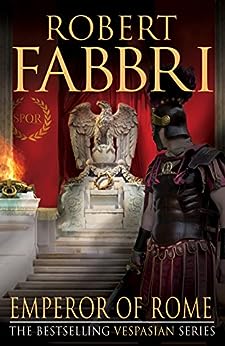 "Fabbri does an excellent job with this scintillating source material." --Times

"Stuffed with political deviousness and vivid depictions of war and torture, Fabbri's eighth book of the series is shockingly good." --Sunday Sport

"Robert Fabbri has a winner on his hands." --BookPlank

The final, thrilling instalment in the epic Vespasian series from the bestselling author, Robert Fabbri.

Rome, AD 68. Vespasian is tasked with the impossible. Should he quell the revolt in Judaea, as Nero the emperor has instructed, or resort to the unthinkable and sabotage his own campaign? If his conquest succeeds, he risks facing the mad emperor's jealousy. If he fails, his punishment will be severe.

History lover
5,0 van 5 sterren excellent end to a great series
25 augustus 2019 - Gepubliceerd op Amazon.com
Geverifieerde aankoop
Writing a series of several books is a daunting task and the author is in constant danger of repeating ideas or story lines and losing himself in his plots. Some sequels couldn't avoid this trap, but the final sequel of Vespasian is a great conclusion of an exciting journey through time. Highly recommended although the extreme violence is something I'll never get used to, I understand that it was part of the reality of Rome shortly AC , therefore it had to be part of the novel.
Meer lezen
Vertaal recensie in het Nederlands

brandt johnson
5,0 van 5 sterren A little sad it's over.
16 februari 2019 - Gepubliceerd op Amazon.com
Geverifieerde aankoop
Well 5 years since I started reading and looking forward to and immersing myself in each newest Vespasian adventure now ends with Emperor of Rome. This was a fantastic concluding volume to the series and worth the reading to get to it. Definitely recommended.
Meer lezen
Een iemand vond dit nuttig
Vertaal recensie in het Nederlands

Kindle Customer
5,0 van 5 sterren Saddened by the end of such a saga.
17 juni 2019 - Gepubliceerd op Amazon.com
Geverifieerde aankoop
Discovered the series a year ago and have read them all with pleasure. Learned a huge amount and did my own research as a result. Enjoyed them all and have a much better understanding of history. Wish this had been written when I lived in Rome - would have added so much. Thank you for sharing this with me.
Meer lezen
Vertaal recensie in het Nederlands

Geoff Finnis
3,0 van 5 sterren Review
21 januari 2019 - Gepubliceerd op Amazon.com
Geverifieerde aankoop
A suitable ending to the series but a little too staged managed to be really good. Felt like the author was writing this book because the publisher wanted another book no matter what it was like.
Meer lezen
2 mensen vonden dit nuttig
Vertaal recensie in het Nederlands