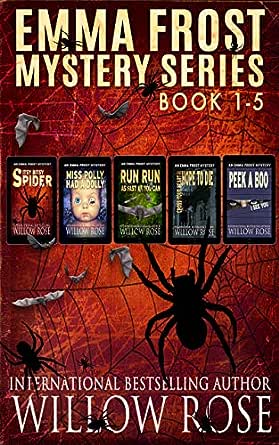 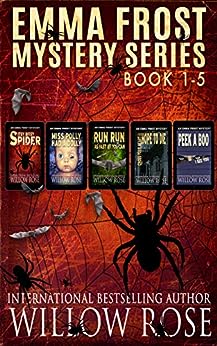 Crazy deal! Get five chilling page-turners from the queen of scream: Bestselling author Willow Rose - On sale for a limited time.

A modern MURDER SHE WROTE

Emma Frost inherits a house on Fanoe Island when her grandmother dies. She decides to move there with her family, much to her teenage-daughter's regret. One morning a wealthy old woman in her street is found murdered and soon Emma finds herself wrapped in a mystery uncovering the island's dark secrets that not only runs deep within the history of the island but also within her own family.

Miss Polly had a dolly. A beautiful daughter that she called her Baby Doll. Every day she dressed her in dresses and brushed her hair before they went outside to show off to the neighbors. On the playground one day her Baby Doll talked to a boy, and for one unforgivable second, Miss Polly let herself be distracted by a woman telling her how adorable she thought her daughter was. When Miss Polly finally turned to look for her Baby Doll, she was gone.

Many years later Emma Frost hears about the disappearance of the little girl and learns that she is not the only one to have gone missing from Fanoe Island back in the nineties. As she digs deeper into the story, she soon finds herself entangled in a web of strange and very disturbing events.

˃˃˃ RUN RUN AS FAST AS YOU CAN (Emma Frost Book 3):

Simone Beaumont is having a rough day. She is exhausted. Her baby is crying non-stop, she is in a fight with her husband and hasn't spoken to him since last night. A big part of her want to just leave everything. To run away from it all. To vanish. She is considering it while putting her screaming baby in her car seat when suddenly she meets a man in the parking lot who without asking her makes her wish come true.

Emma Frost has just come home from a trip to Eastern Europe when the body of Simone Beaumont is being found. It turns out she was part of Sophia's mothers’ group and soon the small group is shaken by yet another disappearance.

We all know that high school reunions can be a daunting and sometimes horrifying experience. Well, for Emma Frost that is exactly what it becomes when she is invited to meet with all of her old classmates at a desolated hotel in the most Northern part of Denmark. Soon, she will learn that there was more to this reunion than just them catching up on old times as a dark secret from their mutual past is revealed.

Fasten your seatbelt as Willow Rose takes you on a crazy and very surprising ride.

The body of a woman found in front of Nordby City Hall has a message for Emma Frost carved into the skin. Behind this ruthless murder stands a ghostly figure that likes to play childish games. Soon, this killer brings a reign of terror to the small Danish Island and especially to the life of Emma Frost.

While Emma's personal life is in a mess, she also has to hunt down a cruel predator who seems to be targeting people with serious mental illnesses.

Scroll up and grab a copy today.

Tara MG
5,0 van 5 sterren Not my usual read
21 mei 2017 - Gepubliceerd op Amazon.com
Geverifieerde aankoop
I selected this book collection because someone close to me recommended the author, and she is a local, living in Cocoa Beach. The books are easy to read, fun, scary, and have nothing to do with Cocoa Beach. I found myself involved in the mysteries and caring about the characters. Horror is not my usual genre, but I was happy enough at the end of book one to continue, telling myself I would stop at the end of the series. At the end of book five I knew I wanted more Emma Frost mysteries. Willow Rose is a talented author.
Meer lezen
18 mensen vonden dit nuttig
Vertaal recensie in het Nederlands

Stephanie H
3,0 van 5 sterren First half of series
3 oktober 2016 - Gepubliceerd op Amazon.com
Geverifieerde aankoop
Alright. So the books are pretty good. A few terrible mistakes that were either digital copy typos or terrible editing. Worst issue with this digital "box set" is that the books are not in order. They go 1, 2, 3, 5 then 4. And 5 contains a small spoiler for 4. But the books were decent otherwise. Great characters and keep you guessing. Several twists that you don't see coming and nothing is what you expect it to be.
Meer lezen
24 mensen vonden dit nuttig
Vertaal recensie in het Nederlands

Over the course of five good stories, we the reader become familiar with the community and somewhat with the culture. We also get a narrative style that takes a little adaptation because at first it feels jarring.

Rather than summarize five books, I would rather praise the author for two things:

1. She abandons the "supernatural" hints she lays in the first story. Her son is NOT some kind of psychic or anything, so let that little hiccup in her narrative pass. She won't do it again.

2. She uses pop culture as a plot device, not as the plot itself. I enjoy seeing her slightly skewer pop culture in this way.

ShereeK
4,0 van 5 sterren Books 1-5 Box set
25 september 2018 - Gepubliceerd op Amazon.com
Geverifieerde aankoop
I mostly enjoyed these books. You really need to read this series in order because they build on each other. There is much mystery and intrigue in each one. The plots are well developed and they keep you guessing up to the last chapter of each one. Would definitely recommend if you aren't offended by gore.
Meer lezen
5 mensen vonden dit nuttig
Vertaal recensie in het Nederlands
Ga naar Amazon.com om alle 118 recensies te bekijken 4,1 van 5 sterren
Terug naar boven
Over ons
Verkoop bij ons
We helpen je graag
© 1996-2020, Amazon.com, Inc. en dochterondernemingen