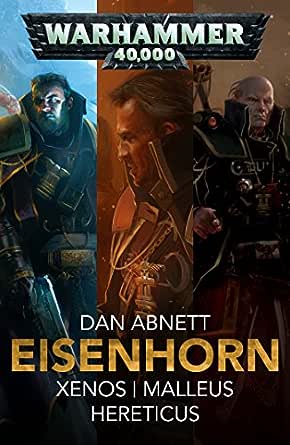 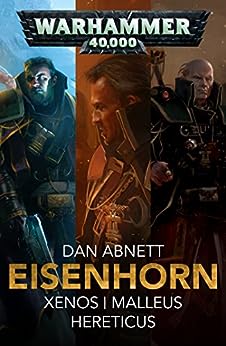 Inquisitor Gregor Eisenhorn is an Imperial inquisitor, one of the tirelss defenders of humanity. With his warband he scourges the galaxy, walking in the shadows of darkness in order to root out heresy. When that heresy is found to infiltrate the hierarchy of the Imperium and the Inquisition itself, Eisnehorn must rely on himself alone to deal with it – even if it means making deals with the enemy and compromising everything he ahs ever believed in.

Read it because
It's the whole classic trilogy that remains top of many Warhammer 40,000 fans' must-read lists, And in Pariah, there's a chance to catch up with Eisenhorn decades later, when he's a renegade from Imperial justice...

T. Verghese
5,0 van 5 sterren Worth it
8 juli 2017 - Gepubliceerd op Amazon.com
Geverifieerde aankoop
Paid something in the range of $50 for it. Definitely worth at least the sticker price for the individual books. Truly superb series with a great balance of intrigue and action. It's good clean fun. I think I slightly prefer the sequel in contrast to most people but it's a marginal decision and both are excellent. Just demolished both trilogies.

I'd only quibble that the pricing is kinda ridiculous. I was curious about 40kj after reading a bunch of the wiki and got this. At $50 it's a bit harder to just throw at a friend. At the $20 range that Ravenor goes for, yeah it's a no brainer. Seems a bit unfortunate because by all accounts this is one of the best introductions to the universe. It's a great fun novel generally- forget the 40k part.

Story:
This omnibus features a trilogy of novels and two short stories chronicling the life of Imperial Inquisitor Gregor Eisenhorn. An Inquisitor is an agent who carries out the Emperor's will and combs the galaxy in search of heretics who have been touched by the forces of Chaos. When heretics are found, they are forced to confess through nine steps of unpleasant 'interrogation.' An Inquisitor follows a strict moral code, and must be very careful not to be corrupted by the forces that he is exterminating or he himself may be hunted down and interrogated... most unpleasantly.

World:
The Warhammer 40K universe is amazing. It is designed around an empire in a tumultuous existence fighting everlasting wars for thousands of years. The galaxy is war torn and just about every object in the world has been built to kill or withstand bullets, lasers, and blasts. The people are hardened, heroic, and loyal to their emperor. Just do a Google image search for "Warhammer 40k" and you'll see what I'm talking about.

These books do an outstanding job at describing the landscapes, the vehicles, the weapons, the armor, the aliens, the demons... It will push your imagination to its limit.

Characters:
The characters are a mixed bag. Gregor Eisenhorn is well written and you understand his emotions and feel for him as he makes very difficult decisions. The rest of his allies are somewhat expendable. Many die off screen in a few words. "Fred was vaporized." Or "Fred died." Then Fred is suddenly replaced by Dave. Because of this, it is difficult to get attached to Gregor's crew.

The villains in this series are excellent. They are dark, malicious, deceiving, and usually have some pretty scary physical characteristics. One antagonist is another Inquisitor who had his bottom jaw destroyed and replaced by a steel one. At first I thought, "bear trap." Then I imagined it as real as possible, an uncanny valley of steel complete with a chin and bottom row of teeth, with squealing metallic sounds whenever his mouth moved. It's really fun to imagine the villains.

Writing Style:
Dan Abnett's writing style is a mixed bag. He does some things great: The Environments, the Battles, the Characters' Personalities, and the Villains.

But there were a few things that really bothered me:
1) Sentences are not written in chronological order.

Example: "This is Medea Betancore," I said, once his strong metallic grip released my hand.
If you are trying to visualize this scene, you hear a voice say the line... then realize it was Eisenhorn... then realize that he shook hands... with a cyborg... Sentence structure like this will throw you off if you enjoy "watching movies in your head" as you read fantasy. It is a minor detail, but as these creep up, you'll find yourself re-reading sentences and paragraphs over to get a better idea of what happened.

2 Pacing
At times, the book goes into great detail about where the crew went, but glosses over important details with just a few words. "We spent 2 months on X moon, then a year on Y planet, then traveled to a distant star for 3 months. And Fred was vaporized. And then we visited Inquisitor Z in a space station..." Wait a second... Fred died?! He was my favorite character and that's all we get? Why was Fred's death buried in a massive section of Warhammer codexes? Fred deserved an on-screen heroic death! Sigh... I'm gonna miss Fred.

3 Momentum
The books typically start out with a main goal, but the characters end up on a lot of side quests that almost feel like 20-50 page tangents. Then it's a big rush at the end to tell what happened. This book would have been much better if the important events were given more "screen time" and the story was paced more evenly.

These things won't bother most of the Warhammer 40K fans, though.

Action:
The action in this book is pretty damn awesome and has some of the most epic battles ever written. There are wars, skirmishes, demons, psykers, battle titans, space battles, robots, lasers, metal slugs, aliens... Warhammer fans will be happy to read these. They are "crazy-over-the-top-super-epic!"

Overall:
I understand why Warhammer 40k fans love this book. Dan Abnett got all of the important stuff right. There are great battles, a deep story, great villains, and fantastic descriptions of environments. It definitely puts you in the heat of battle! This book also contains some unforgettable scenes of carnage! However, the books do have some flaws with the things that don't matter as much. If you're just in it for the Warhammer 40K Greatness, you will give this 5 stars. If you want to enjoy this as a book or focus on the writing style, then some of the little flaws will bother you.

Amazon Customer
4,0 van 5 sterren Absolutely Brilliant
1 augustus 2019 - Gepubliceerd op Amazon.com
Geverifieerde aankoop
When it comes to 40k books, I've typically stuck to Imperial Guard based ones as they're the most relatable for me in the setting, and my introduction to the fandom as a whole was the Ciaphas Cain series. Somewhat recently I began running a Dark Heresy game for some friends and, while I've had a general overarching story for them, a lot of the details were sparse so I was directed to check out the adventures of Eisenhorn. I put the context here at the beginning because it's necessary to understand what I was looking for and what I have typically enjoyed in the past in order to determine if my experiences will mirror yours.

So, I stopped at my local brick and mortar bookstore and I found The Magos and decided "All right, time to start reading." But it gave me a list of all of the Eisenhorn books and said "We really recommend you read all of these short stories and actual novels, the novels of which don't appear in this compendium." And so I bought the Eisenhorn Omnibus (and just yesterday had the Ravenor Omnibus arrive). The big three stories are in this omnibus, Xenos, Malleus, and Hereticus and they're all very good (though I feel the ending of Hereticus was Dan just feeling overwhelmed and so it feels very very rushed especially compared to the rest of the book). The main reason I'm giving this review a 4 stars instead of the 5 I originally planned on giving it is that you don't really get many of the short stories. Specifically you get 2 of the 12 total short stories in the legacy of Eisenhorn and, while the main stories are all very good, I would have expected at least one short story per main story. Even if they don't 100% connect to the plots of the main stories, short stories are good to give you some additional glimpses into Eisenhorn's character and progression. I'm not going to put any spoilers here for the books, but reading along with them all, you get some little glimpses here and there in some of the short stories of things that will be revealed in the main stories.

To put it simply, the Eisenhorn omnibus is a great purchase, though I would also make sure to pick up The Magos to get some really high quality filler.
Meer lezen
Vertaal recensie in het Nederlands

FJGC
5,0 van 5 sterren I loved Dune. I loved this. A joy-ride. Excellent and fun read.
31 december 2013 - Gepubliceerd op Amazon.com
Geverifieerde aankoop
I've read this about 3 times, and it does not dissapoint. If you're a science fiction fan of any sort, just buy this, specially if you are new to the Warhammer 40K universe. Dan manages to cram the WH40k universe with full of interesting details (not just about armies, or wars, but about cities, customs, planets, trade practices, etc), the characters are full of personality and the story is full of suspense, action, comedy, drama. A perfect story. The WH40K sometimes gets criticized as being cheesy and over the top: Eisonhorn brings everything together and makes it real and believable, in your face. Highly recommended. If someday a Hollywood type decides to bring the WH40K universe to the big screen (or preferebly in a top notch TV series), well, this is the story that would be chosen to portray IMO. It's Game of Thrones quality stuff, I'm not kidding!
Meer lezen
4 mensen vonden dit nuttig
Vertaal recensie in het Nederlands
Ga naar Amazon.com om alle 115 recensies te bekijken 4,6 van 5 sterren
Terug naar boven
Over ons
Verkoop bij ons
We helpen je graag
© 1996-2020, Amazon.com, Inc. en dochterondernemingen