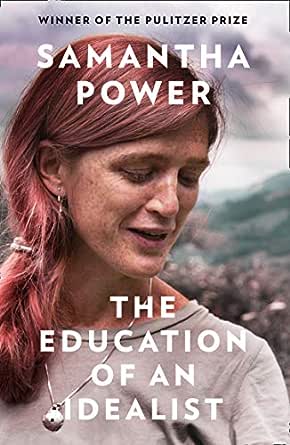 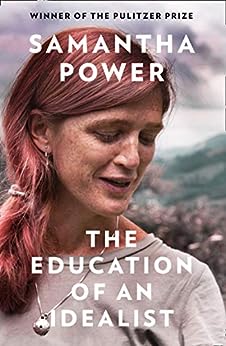 The Education of an Idealist: THE INTERNATIONAL BESTSELLER (English Edition) Kindle-editie

AN ECONOMIST BOOK OF THE YEAR 2019

A TIMES LITERARY SUPPLEMENT BOOK OF THE YEAR 2019

What can one person do?

At a time of division and upheaval, Samantha Power offers an urgent response to this question – and calls for a clearer eye, a kinder heart, and a more open and civil hand in our politics and daily lives.

The Education of an Idealist combines gripping storytelling, vivid character portraits and deep political insight, tracing Power’s journey from Irish immigrant to war correspondent and presidential Cabinet official. In 2005, her critiques of US foreign policy caught the eye of newly elected Senator Barack Obama, who invited her to work with him on Capitol Hill and then on his presidential campaign. After Obama was elected president, Power went from being an activist outsider to a government insider, navigating the halls of power while trying to put her ideals into practice. She served for four years as Obama’s human rights adviser, and in 2013 took one of the world’s most powerful diplomatic positions, becoming the youngest ever US Ambassador to the United Nations.

A Pulitzer Prize-winning writer, Power transports us from her early years in Dublin to the streets of war-torn Bosnia into the White House Situation Room and the arena of high-stakes diplomacy. The Education of an Idealist lays bare the searing battles and defining moments of her life and shows how she juggled the demands of a 24/7 national security job with the challenge of raising two young children. Along the way, she illuminates the intricacies of politics and geopolitics, and reminds that in the face of great challenges there is always something each of us can do to advance the cause of human dignity. Honest, inspiring and evocatively written, Power’s memoir is an unforgettable account of the world-changing power of idealism – and of one person’s fierce determination to make a difference.

S. R. Schnur
5,0 van 5 sterren Well written
16 september 2019 - Gepubliceerd op Amazon.com
Geverifieerde aankoop
Reading a book over 500 pages long is a daunting task. The mitigation is that Samantha Power is a good writer who holds the reader's interest. Young enough to be my daughter, she has lived enough for three normal length lives. Hence the necessity of a long autobiography.

It should be no surprise that she writes well because she started out as a journalist. Her desire is to affect the world for the better. She became an expert on genocide. This makes the book depressing in spots, but she might be helping bend the curve away from genocide in the long run. It depends upon which way we go in 2020, I guess.

Besides her journalistic career and her expert knowledge on genocide, and her diplomatic career, she has managed to have two children. It is all there - her childhood in Ireland, her travels, her loves, her failings, her government work, her child rearing. Her book reminds me of how there are so many people in the world who are smarter and more energetic than I.

It was hard to put the book down because it was so interesting, but even so, it took be the better part of three days to read.

Book Lover
2,0 van 5 sterren The 800 pound gorilla
23 september 2019 - Gepubliceerd op Amazon.com
Geverifieerde aankoop
I wanted to like this book, I really did. My priors were that Samantha Power is an interesting, intelligent, and well-intentioned person. Which I continue to believe. And I agree with the majority of the comments, that the book is well written.

However, and this is a big however, she reveals what to me seems a huge blind spot, on the order of those exhibited by one of her mentors, Richard Holbrooke.

The blind spot is this. Ms. Power consistently praises the US for its diversity, while she consistently criticizes various other countries for genocide. What is wrong with this? It is certainly not wrong to criticize genocide! What is wrong is to ignore the important link between diversity and genocide. Genocide is an extreme response by governments to minorities in their populations from which the majority differs in some important way. Without those differences -- which can be ideological, religious, political, or racial -- there is no basis for persecution or discrimination of any sort of the minority(ies) by the majority, let alone for the extreme response of genocide. In short, diversity is a necessary but not sufficient condition for discrimination of all sorts, up to and including genocide. This is one lesson of history, and the examples are simply too many to ignore.

In short, Ms. Power appears to advocate diversity within nations as a purely good thing, while history teaches us that such diversity is a best a mixed bag. And so, Ms. Power appears to be asserting that governments can, going forward, constrain their citizens to react differently than citizens of the past have repeatedly done in the face of racial and other differences between them, which is to cluster in tribes and to distrust strangers. In short, she expects that governments are capable of altering basic human nature. That is one VERY optimistic assumption. It is especially problematic when one considers that ALL forms of government, not limited to democracy, provide strong incentives for those in power to cater to the power blocs in their populations in order to maintain control. And one way to do that, a way that is especially prominent in today's political world, is to demonize the opposition, in this case, those who differ in race, gender, politics, and/or religion from the majority.

It seems to me, when discussing policy in diverse populations, one should at least consider the possibility that diversity could be a governance problem, as it turned out to be for the US in Iraq and Afghanistan, for example. And in Bosnia. And in Yemen. This, I imagine, is the basis for support of a two nation solution to the Israeli-Palestinian conflict.

This issue is, of course a very large and contentious one. All the more reason why Ms. Power should have addressed it in her book. Otherwise it is, and unfortunately remains, the 800 pound gorilla in the room.
Meer lezen
83 mensen vonden dit nuttig
Vertaal recensie in het Nederlands

Gregory J. Auger
5,0 van 5 sterren Can't put it down
20 september 2019 - Gepubliceerd op Amazon.com
Geverifieerde aankoop
It's been a long time time I had to force myself to put a book down and get out of my official reading chair. It's a beautiful, warm fall day out there and all I want to do is turn these pages. It's not often that you find a foreign policy geek who also knows how to write.
Meer lezen
41 mensen vonden dit nuttig
Vertaal recensie in het Nederlands

This woman has something to say:
- idealist
- immigrant
- human rights advocate
- mother
- former US Ambassador to the UN

hah
5,0 van 5 sterren Candid, detailed high energy, good read.
23 september 2019 - Gepubliceerd op Amazon.com
Geverifieerde aankoop
I pre-ordered and read it so fast, couldn’t put it down. Not just her writing but it’s her energy that keeps you going. It’s candid and detailed, loved getting an insight to how bureaucracy works (or doesn’t) inside the government. You might be a Democrat or republican, doesn’t matter, her humanitarian missions alone make the book worth reading. And it proved to me that Obama wavered at key decisions, he got distracted with the noise around him that blurred his vision with foreign affairs. I admired how Samantha is very direct and clear and never loses focus, something I consciously practice everyday.
Meer lezen
22 mensen vonden dit nuttig
Vertaal recensie in het Nederlands
Ga naar Amazon.com om alle 89 recensies te bekijken 4,4 van 5 sterren
Terug naar boven
Over ons
Verkoop bij ons
We helpen je graag
© 1996-2020, Amazon.com, Inc. en dochterondernemingen