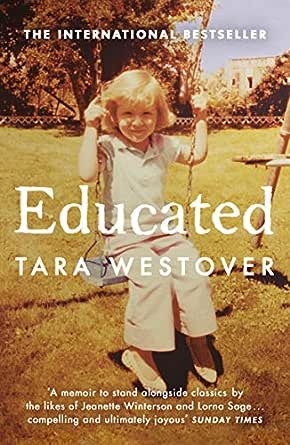 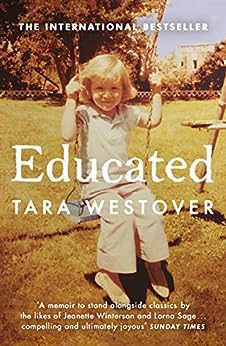 "Westover has somehow managed not only to capture her unsurpassably exceptional upbringing, but to make her current situation seem not so exceptional at all, and resonant for many others."--The New York Times Book Review "Westover is a keen and honest guide to the difficulties of filial love, and to the enchantment of embracing a life of the mind."--The New Yorker

"An amazing story, and truly inspiring. It's even better than you've heard."--Bill Gates "Heart-wrenching . . . a beautiful testament to the power of education to open eyes and change lives."--Amy Chua, The New York Times Book Review "A coming-of-age memoir reminiscent of The Glass Castle."--O: The Oprah Magazine "Westover's one-of-a-kind memoir is about the shaping of a mind. . . . In briskly paced prose, she evokes a childhood that completely defined her. Yet it was also, she gradually sensed, deforming her."--The Atlantic "Tara Westover is living proof that some people are flat-out, boots-always-laced-up indomitable. Her new book, Educated, is a heartbreaking, heartwarming, best-in-years memoir about striding beyond the limitations of birth and environment into a better life. . . . ★★★★ out of four."--USA Today "[Educated] left me speechless with wonder. [Westover's] lyrical prose is mesmerizing, as is her personal story, growing up in a family in which girls were supposed to aspire only to become wives--and in which coveting an education was considered sinful. Her journey will surprise and inspire men and women alike."--Refinery29

"Riveting . . . Westover brings readers deep into this world, a milieu usually hidden from outsiders. . . . Her story is remarkable, as each extreme anecdote described in tidy prose attests."--The Economist "A subtle, nuanced study of how dysfunction of any kind can be normalized even within the most conventional family structure, and of the damage such containment can do."--Financial Times "Whether narrating scenes of fury and violence or evoking rural landscapes or tortured self-analysis, Westover writes with uncommon intelligence and grace. . . . One of the most improbable and fascinating journeys I've read in recent years."--Newsday

‘An amazing story, and truly inspiring. The kind of book everyone will enjoy. IT’S EVEN BETTER THAN YOU’VE HEARD.’ – Bill Gates

Tara Westover and her family grew up preparing for the End of Days but, according to the government, she didn’t exist. She hadn’t been registered for a birth certificate. She had no school records because she’d never set foot in a classroom, and no medical records because her father didn’t believe in hospitals.

As she grew older, her father became more radical and her brother more violent. At sixteen, Tara knew she had to leave home. In doing so she discovered both the transformative power of education, and the price she had to pay for it.
________________________

· From one of TIME magazine's 100 most influential people of 2019
· Shortlisted for the 2018 BAMB Readers' Awards
· Recommended as a summer read by Barack Obama, Antony Beevor, India Knight, Blake Morrison and Nina Stibbe

Drew Mecham
5,0 van 5 sterren Overcoming the gaslighting
8 april 2018 - Gepubliceerd op Amazon.com
In the interest of full disclosure, I'm the Drew from this book, and although Tara and I are no longer together I’ve met all of the key figures in this book on many occasions. Although I don’t have as intimate a knowledge of growing up in the Westover family as a sibling would, I observed first hand everything Tara describes in the third part of the book and heard many stories about earlier events, not just from Tara, but from siblings, cousins, and her parents themselves. I find the claims of factual inaccuracy that have come up among these reviews to be strange for two reasons. First, in a post-James Frey (“A Million Little Pieces”) world, publishers are incredibly careful with memoirs and “Educated” was extensively fact checked before publication. Second, no one claiming factual inaccuracy can do so with any precision. While every Westover sibling, as well as their neighbors and friends, will have different perspectives and different memories, it is very difficult to dispute the core facts of this book. “Educated” is about abuse, and the way in which both abusers and their enablers distort reality for the victims. It’s about the importance of gaining your own understanding of the world so you’re not dependent on the narratives imposed on you by others. I’ve heard Tara’s parents attack schools and universities, doctors and modern medicine, but more importantly, I’ve seen her parents work tirelessly to create a world where Shawn’s abuse was minimized or denied outright. I’ve seen them try to create a world where Tara was insane or possessed in order to protect a violent and unstable brother. I was with her in Cambridge when Shawn was calling with death threats, then saw her mother completely trivialize the experience. For Tara’s parents, allegiance to the family is paramount, and allegiance to the family requires you to accept her father’s view of the world, where violence is acceptable and asking for change is a crime.
Meer lezen
11.921 mensen vonden dit nuttig
Vertaal recensie in het Nederlands

TasaK
1,0 van 5 sterren Critical Thinking Alert!
22 december 2018 - Gepubliceerd op Amazon.com
Yes, I believe the abuse and also the gaslighting from her parents and family members. But a lot of her story rang false to me.

1. Tara Westover grew up in the 1990s (not the 1890s) and much of this memoir covers that time period. Although her family had a television, telephone and computer, she describes her family in this TV-folksy way as if took place around the time of "Little House on the Prairie." Her father's dialogue alone: He refers to school as "book learning" and at one point asks to know "about them classes." She calls her mother "Mother" yet in a quoted email toward the end of the book she calls her "Mom," which is a lot more likely for someone born in 1986 (not 1886.) Her father says Tara is getting "uppity" when she decides she wants some of that thar book learnin'.

2. Tara is playing the lead in the town's musicals as a young teen and taking dance and piano classes yet she is so naive about clothes and has so few that we are treated to the following scene, a la Laura Ingalls, when "Mother" takes her to Aunt Angie's house to get a dress:

"Angie... laid out an armful of dresses, each so fine, with such intricate lace patterns and delicately tied bows, that at first I was afraid to touch them.... "You should take this one," Angie said, passing me a navy dress with white braided cords arranged across the bodice. I took the dress, along with another made of red velvet collared with white lace, and Mother and I drove home."

What, no butter churn?

Remember, Tara is not isolated "off the grid." She's in town playing the LEAD in "Annie" as a kid, around other kids who presumably weren't so "isolated." Yet at 15 she's saying she thought Europe was a continent and didn't know where France was. Then again she's careful to say her father only watched "The Honeymooners" reruns on TV -- even though her father, who is in his mid to late 50s, was not even born when "The Honeymooners" originally played on TV.

Tara Westover grew up in the same era as Vanilla Ice, "Beverly Hills 90210," "Saved by the Bell" and MC Hammer but apparently none of those other "book learning" kids in town mentioned this. Pretty much the only pop culture references in the book involve Ralph and Alice Kramden.

3. Harrowing, near-fatal accidents appear in what to seem to be every other chapter. The injured family members hardly ever go to the hospital, emerging from unconsciousness, brain injuries, bloody limbs, or burns and more fairly unscathed a few months later each time.

Her mother is left apparently brain damaged after one terrible car accident. She never sees a doctor despite weeks of migraines and a lot of time spent in the darkened basement. She recovers, of course, enough to run a lucrative, essential oils business, Butterfly Quality Essential Oils, that employs many in the Westover family. This business is rarely mentioned in the book and instead it seems as if the Westover made their living working in "the junkyard."

Abusive brother Shawn is in two horrendous accidents - he falls in the junkyard, is knocked unconscious and yet "lived through the night." Later he has a motorcycle accident and Tara can see his brain through a hole in his forehead. "His brain, I can see it!" she cries on the phone to Dad. Shawn winds up in the hospital but the hole in his brain? No biggie. He recovers.

Luke's arm is gashed through to the bone while working one of the family's junkyard machines. (Tara also gets a gash in her leg from a farm injury. There is a lot of bloody "gashes" in this book. The family German shepherd is apparently chopped to death by Shawn.) Another time Luke also gets badly burned in a fire and all they do is stick his leg in a garbage pail to cool it down. He recovers without a doctor of course.

Dad is horribly burned, or so Tara says, in yet another accident involving a fuel tank on their property which leaves his "insides charred." He "still had a forehead a nose... but below his nose, nothing was where it should be. Red, mangled, sagging, it looked like a plastic drama mask that had been held to close to a candle."

Tara sees her mother take a butter knife to "pry my father's ears from his skull." He never sees a doctor for these life-threatening burns but recovers well enough to return to work. He is also pictured on his wife's Facebook page in a 2009 photo (taken after the burn accident) and his face looks normal.

There's yet another bad car accident, in which Dad drives so fast their van crashes into the snowdrifts, upside down. Tara winds up unconscious but doesn't go to the hospital. Her mother calls in an energy healer. Tara recovers.

4. When she's about 15, uneducated, mainly unschooled Tara decides she wants to take the ACT. She drives (by herself) into town to buy an ACT study guide. She scans the first page and doesn't understand the symbols. "What's this?" she asks Mother. "Math," says Mother.

Yet within a few months, Tara goes from teaching herself the multiplication tables to mastering trigonometry - enough to ace the ACT test. The accidents that befall the Westover family and the abuse Tara suffers at the hands of her brother Shawn are described in depth; her "Education" is not.

She goes from a 15-year-old who can't identify math symbols to acceptance at Brigham Young University and then - poof - acceptance for study abroad at Cambridge at 17 where her smitten professor says her essay is the best he's ever read. From there it's on to Harvard with a lot of traveling to London, Paris, Rome and even a quick trip to the Middle Eastern desert.

Favorite quote from the book? She is at BYU in her dorm room, studying with roommates.