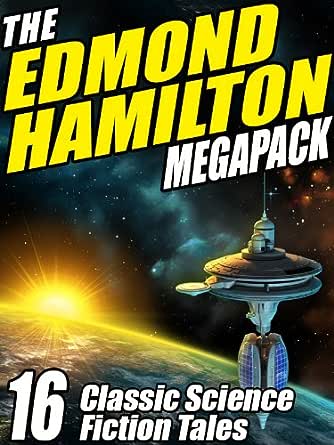 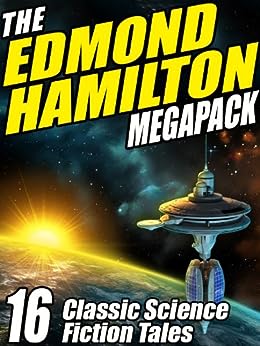 Edmond Hamilton. For most people, this name conjures visions of two-fisted space opera -- pure pulp science fiction. And Hamilton -- known as the author of the "Captain Future" series -- was indeed one of the foremost writers of pulp space opera. Over the years, as his work became more polished and sophisticated, he evolved into far more than that: a visionary of the future whose imagination knew no bounds. He was truly a cosmic writer, as stories such as "Devolution" (in this collection) demonstrate. If you are interested in pulp science fiction at its pulpiest, look no farther. Edmond Hamilton is the author for you.

Included in this volume:

THE DOOR INTO INFINITY

THE LEGION OF LAZARUS

THE CITY AT WORLD'S END

THE WORLD WITH A THOUSAND MOONS

THE STARS, MY BROTHERS

THE SARGASSO OF SPACE

THE MAN WHO SAW THE FUTURE

THE MAN WHO RETURNED

THE MAN WHO EVOLVED

THE BIRTHPLACE OF CREATION

CORRIDORS OF THE STARS

And don't forget to search this ebook store for "Wildside Megapack" to see more great entries in this series, covering mysteries, westerns, science fiction, historical, and much, much more!

Geoffrey F. Arnold
4,0 van 5 sterren Great fun, good solid writing... old school style... because it IS old school, the original school.
17 augustus 2015 - Gepubliceerd op Amazon.com
Geverifieerde aankoop
Considering many of the stories were written before the space race, and so in an era where adventure ruled, and the guy gets the girl, and we didn't need excruciating details that sounded scientifically sound or were based on actual science beyond a cursory association, most of the stories in this collection are really quite fun. If you enjoy the "old school" science fiction adventures from the 30s, 40s and 50s, without all the sex and drugs and ridiculously convoluted plots and twists that nobody could ever hope to figure out - even the authors (!), you will like this collection.

Kvetch: I grow so tired of finding a book that sounds interesting, only to find it is Book X of a multi-part series. The modern penchant for drawn out plots and universes over multiple volumes grows tiring. I grew up in the time when every book was self contained. Yes, Asimov SLOWLY developed his universe, as did Heinlein and Clarke. But more often than not, each book was a separate adventure in that universe, with occasional references to other stuff that you didn't actually need to have read, and which didn't detract from the story you were reading. They just happened to occur in the same universe the given author was creating.

More one off's please. I don't want to be THAT invested in a character all the time, every time.

This is why I tend to mine the archives for authors of science fiction's golden age. And this is one such collection.

James Elfers
4,0 van 5 sterren Old Fashioned SF At A Bargain Price.
24 juli 2016 - Gepubliceerd op Amazon.com
Geverifieerde aankoop
Edward Hamilton had a long and rich career. Most of the fiction in this collection comes from his earliest days as a writer. This is science fiction from the 1940's and early 1950's. Most are quite compelling but dated. For me, a standout was "The City At The World's End" in wich a stereotypical 1950's small America city is transported billions of years into earth's future courtesy of a nuclear bomb. There is the often reprinted story, "The Sargasso Of Space" and "The Birthplace of Creation" which originally in the pulp magazine "Captain Future" the space opera pulp created to showcase Hamilton's storytelling gifts. What you get out of this collection has everything to do with your taste for vintage space operas and old-fashioned tropes. The science in many of these stories is really naive; in some cases, Hamilton clearly knew better but committed it to print anyway.If you enjoy old school space operas and studly he-man types who always end up with the girl, you will find much to enjoy in this collection. However, if your tastes in SF lean more to the modern, you may want to give this collection a pass. Considering the price, it can be purchased by the curious with little risk. I found it well worth the money.
Meer lezen
Een iemand vond dit nuttig
Vertaal recensie in het Nederlands

Karen M.
5,0 van 5 sterren Forgotten author no more!
28 september 2016 - Gepubliceerd op Amazon.com
Geverifieerde aankoop
Edmond Hamilton was one of the writers who sparked my love of reading, and of reading science fiction in particular. His Captain Future stories were wonderful, and I spent many wonderful hours using those characters as backgrounds for my own imaginary adventures. He is unfortunately a forgotten author today, and it was so good to find this collection. I hope to find many more like it. I would love to once more own all the Captain Future books!
Meer lezen
Vertaal recensie in het Nederlands

brudigia
4,0 van 5 sterren Edmond Hamilton
6 september 2014 - Gepubliceerd op Amazon.com
Geverifieerde aankoop
Science fiction of times past. Simpler, heroes were clean cut and choices were fewer in a simpler world. Scientists could make miracles and easily build something big and wonderful. Today these stories would not be sold, but it does not mean the writer is no good, the times wanted a different kind of stories, Ha,il ton would probably be good today too with more complex stories. After all he had a very grandiose view, galaxies were his playground.
Meer lezen
Vertaal recensie in het Nederlands

Gary Goodman
3,0 van 5 sterren Classic Edmond Hamilton Sci Fi
29 juli 2014 - Gepubliceerd op Amazon.com
Geverifieerde aankoop
Edmund Hamilton would not rate well as an author in a literature class. His characters lack depth and many of the stories are like a western adventure in space. However, Dreamer's World was imaginative and fascinating. He was a prolific and popular writer in the 30s and 40s. I fondly remember reading his novel The Star Kings as a kid. It is much like the Star Wars movie series in depth and style.
Meer lezen
Een iemand vond dit nuttig
Vertaal recensie in het Nederlands
Ga naar Amazon.com om alle 34 recensies te bekijken 4,1 van 5 sterren
Terug naar boven
Over ons
Verkoop bij ons
We helpen je graag
© 1996-2020, Amazon.com, Inc. en dochterondernemingen