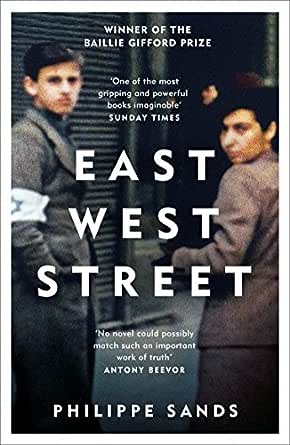 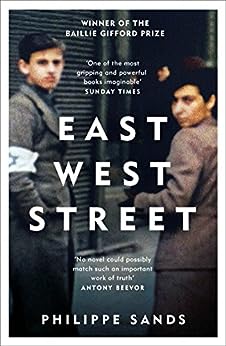 THE BRITISH BOOK AWARDS NON-FICTION BOOK OF THE YEAR 2017

'One of the most gripping and powerful books imaginable' SUNDAY TIMES

When he receives an invitation to deliver a lecture in the Ukrainian city of Lviv, international lawyer Philippe Sands begins a journey on the trail of his family's secret history. In doing so, he uncovers an astonishing series of coincidences that lead him halfway across the world, to the origins of international law at the Nuremberg trial. Interweaving the stories of the two Nuremberg prosecutors (Hersch Lauterpacht and Rafael Lemkin) who invented the crimes or genocide and crimes against humanity, the Nazi governor responsible for the murder of thousands in and around Lviv (Hans Frank), and incredible acts of wartime bravery, EAST WEST STREET is an unforgettable blend of memoir and historical detective story, and a powerful meditation on the way memory, crime and guilt leave scars across generations.

WINNER OF THE HAY FESTIVAL MEDAL FOR PROSE 2017

Michael Griswold
4,0 van 5 sterren An Intimate Story of Three Men who Changed Human Rights Law
21 augustus 2017 - Gepubliceerd op Amazon.com
Geverifieerde aankoop
In East West Street, the reader actually gets treated to three stories. One is the family story of Phillipe Sands who has relatives who survived the Holocaust, thus explaining why he wrote this book and the two men who developed the terms “genocide” and “crimes against humanity” East West Street is like reading a detective story of sorts because one is not exactly sure how the pieces of the three men fit together at points, but by the end they do fit. Having the patience to wait it out may be the hard part.

The choppy vignette nature of some of the sections could make it difficult for certain readers to get truly invested in the story because the minute one gets engaged with one story, the story switches to another character and the process repeats itself. I had trouble with this aspect, but that is really up to the individual reader. To the positive, he made this book quite readable and intimate, which is far from a given with lawyer types. To Genocide scholars, I think he humanized Raphael Lemkin and others and left a better understanding of the humanness behind the convention that means so much.

Joan M. Rudel
4,0 van 5 sterren International Law
2 september 2017 - Gepubliceerd op Amazon.com
Geverifieerde aankoop
Exceptionally well researched. It describes and analyses the inhumanity (perhaps that depravity cannot be called "inhumanity" since humans perpetrated it) of some humans against some others. It raises the question whether, in the darkest corners of our minds, we all may really believe that some humans have a greater right than some others, to exist on this planet. It also shows how the Germans are dealing with their past.

Pat
5,0 van 5 sterren An entirely gripping history
19 juli 2017 - Gepubliceerd op Amazon.com
Geverifieerde aankoop
In this page-turning work of non-fiction Philippe Sands combines a personal memoir with a legal and political history. His detective work in unearthing the history of members of his family in Poland at the time of Hitler's rise and the Holocaust that took many of their lives is as enthralling as the best of crime fiction but the crime he is investigating is the crime of a nation against a people. Parallel with his personal story is that of two lawyers who, in one of the many coincidences that characterise the book, came from the same part of the world as his family and who, each in his own way, contributed to the vocabulary of international law. It is an absolutely fascinating work.
Meer lezen
4 mensen vonden dit nuttig
Vertaal recensie in het Nederlands

dep
3,0 van 5 sterren East West Street: Purchased at Amazon.com
20 januari 2019 - Gepubliceerd op Amazon.com
Geverifieerde aankoop
I had very mixed feelings reading this book. Without a doubt, it is well researched and well written. However, the style of writing is rather choppy, making it difficult at times to stay interested in what you are reading. This leaves a rather uneven flow to the book. I certainly did learn a lot though, since the author is a lawyer and two of the main characters are lawyers there is much legalese in here. A really good read, although not an easy one to get through.
Meer lezen
Vertaal recensie in het Nederlands
Ga naar Amazon.com om alle 127 recensies te bekijken 4,6 van 5 sterren
Terug naar boven
Over ons
Verkoop bij ons
We helpen je graag
© 1996-2020, Amazon.com, Inc. en dochterondernemingen