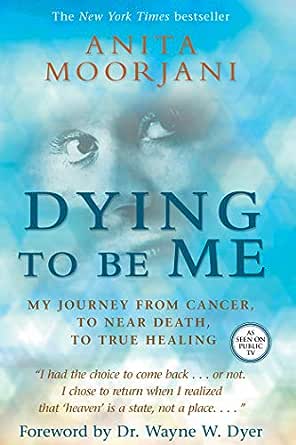 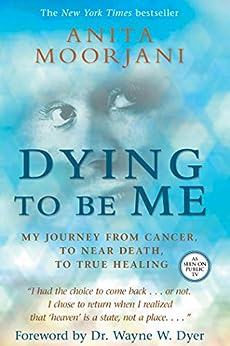 Dying to Be Me (English Edition) Kindle-editie

In this truly inspirational memoir, Anita Moorjani relates how, after fighting cancer for almost four years, her body began shutting down—overwhelmed by the malignant cells spreading throughout her system. As her organs failed, she entered into an extraordinary near-death experience where she realized her inherent worth . . . and the actual cause of her disease. Upon regaining consciousness, Anita found that her condition had improved so rapidly that she was released from the hospital within weeks—without a trace of cancer in her body!

Within this enhanced e-book, Anita recounts—in words and on video—stories of her childhood in Hong Kong, her challenge to establish her career and find true love, as well as how she eventually ended up in that hospital bed where she defied all medical knowledge.

In "Dying to Be Me," Anita Freely shares all she has learned about illness, healing, fear, "being love," and the true magnificence of each and every human being!
click to open popover

Deborah Dolen
5,0 van 5 sterren Unique NDE in Respect to WHY Author had Cancer - Few NDE's Return and Can Recall WHY
22 juli 2017 - Gepubliceerd op Amazon.com
Geverifieerde aankoop
I have read THOSUANDS of Near Death Experiences and THIS ONE had a very special spoiler I will not share--but it WAS the ONLY reason I bought this one book. My lover passed away a few years ago from the SAME EXACT condition and I mean right down to her (this author) being so wasted muscle wise and obvious to most people she had zero chance to live not to mention come back and have a good body again. I am female and wanted to know HOW my lover felt when he passed. Since both died of same rare disease. After reading her book and rushing to the part of her actual death and her discovery of WHY she had cancer in the first place-I was positive this is the same reason I lost my lover. Her book is VERY special more so to people losing someone to cancer. However her reason and my lovers reason does not mean it is everyone's reason who is departing w cancer. But his personality was the same as his and mental positioning.

I was not with him when he died because his cell phone was left in the ambulance and he could not call me - meantime I was in another city waiting for him and seeing a big crow dancing it front of me and following me around. I will give you my spoiler--it was HIM telling he was happy. Meantime I am texting another friend I may be dying soon because this crow was dancing and following me around. We were to meet at a concert knowing he only had days so Doctors were just letting him go out and live life on tons of prednisone. That gave him all the energy in the world despite the fact he looked like our science school skeleton.

I bought this on Kindle a few years ago show I hope it still shows up as a "verified" review.
Meer lezen
64 mensen vonden dit nuttig
Vertaal recensie in het Nederlands

Linda White
5,0 van 5 sterren I really connected with this book
11 februari 2017 - Gepubliceerd op Amazon.com
Geverifieerde aankoop
This is the second time I have read "Dying to Be Me", each time I get more out of it. I felt drawn to read it again a week ago and a couple days into reading it I got informed of my brothers terminal cancer diagnosis. I am not sure he is open to read this but I will see how it goes. It's very difficult to approach someone in that state of mind about thinking differently concerning a disease that has so much fear surrounding it.

I have run the gamut of religions and belief systems in my life and what Anita writes is what resonates the most with me. I know I have spent most of my life not really loving myself and this is the path I choose to finish living my life on. With so much fear running rampant now we can see all the damage that is the result of it. Choosing to love yourself is the only thing we have control over.
Meer lezen
32 mensen vonden dit nuttig
Vertaal recensie in het Nederlands

Steve Blumberg
5,0 van 5 sterren Another Hopeful Account of Why Fear Is Such a Waste of Time
16 oktober 2016 - Gepubliceerd op Amazon.com
Geverifieerde aankoop
I have read accounts and watched videos of near-death experiences for decades, and I hear clearly that there is no need to be afraid. Anita Moorjani's account of her experience is one of the clearest, validated, and instructive accounts to this effect. I think as more and more people become familiar with these stories, we may stand a chance of letting go of all our fear-based self-destructive patterns, including war, addiction, disease, and poverty. I highly recommend this book.
Meer lezen
29 mensen vonden dit nuttig
Vertaal recensie in het Nederlands

Louise
5,0 van 5 sterren Changed my life. Every person should read this book!!
19 november 2016 - Gepubliceerd op Amazon.com
Geverifieerde aankoop
This book changed my life. It changed my views not only on death but also on life. I have listened to it over and over on Audible and have read the paper version too. I also went to see Anita speak with Wayne Dyer in what was his last tour. This book is one I think every person should read, especially if you fear death or are facing a life-threatening illness for yourself or in your family. Listening to Anita read the book in audio is the most powerful way to consume it I believe. But either way, READ IT. Keep an open mind. Some of it will challenge you. Listen to the whole thing before making judgements. I promise it will be worth it.
Meer lezen
26 mensen vonden dit nuttig
Vertaal recensie in het Nederlands
Ga naar Amazon.com om alle 2.814 recensies te bekijken 4,7 van 5 sterren
Terug naar boven
Over ons
Verkoop bij ons
We helpen je graag
© 1996-2020, Amazon.com, Inc. en dochterondernemingen