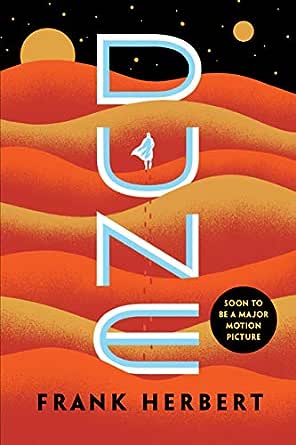 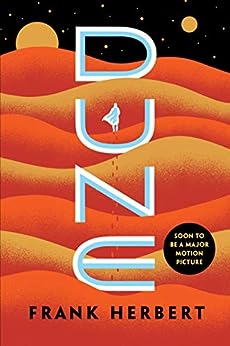 Frank Herbert’s classic masterpiece—a triumph of the imagination and one of the bestselling science fiction novels of all time.

Set on the desert planet Arrakis, Dune is the story of the boy Paul Atreides, heir to a noble family tasked with ruling an inhospitable world where the only thing of value is the “spice” melange, a drug capable of extending life and enhancing consciousness. Coveted across the known universe, melange is a prize worth killing for....

When House Atreides is betrayed, the destruction of Paul’s family will set the boy on a journey toward a destiny greater than he could ever have imagined. And as he evolves into the mysterious man known as Muad’Dib, he will bring to fruition humankind’s most ancient and unattainable dream.

A stunning blend of adventure and mysticism, environmentalism and politics, Dune won the first Nebula Award, shared the Hugo Award, and formed the basis of what is undoubtedly the grandest epic in science fiction.

A new edition of the award-winning science-fiction classic follows the adventures of Paul Atreides, the son of a betrayed duke, who is given up for dead on a treacherous desert planet and adopted by its fierce, nomadic people, who help him unravel his most unexpected destiny. Reissue.
Alle bekijken

agentleila
4,0 van 5 sterren Good book, some distracting voice elements
16 april 2017 - Gepubliceerd op Amazon.com
Geverifieerde aankoop
Dune is a great book, and Simon Vance, the primary narrator of the audible version I'm listening to, has probably one of my favorite voices of all time. The voice acting overall is good in this version, but I'm confused as to why some chapters feature several voice actors doing various characters while other chapters - featuring the same characters - have everything voiced by Vance. As I said, I love his voice, but the switching back and forth is odd and distracting to me.
Meer lezen
111 mensen vonden dit nuttig
Vertaal recensie in het Nederlands

Micah
5,0 van 5 sterren It's everything you've heard it is and more.
31 mei 2017 - Gepubliceerd op Amazon.com
Geverifieerde aankoop
The hype is justified for this book. If you have not read it yet, please do yourself a favor and change that asap. I'm sure there are a landslide of other reviewers that can tell you all about the story itself, so I will skip that. This book was an epic pleasure to read. I had some apprehension going in as I repeatedly heard that it's overly jarring from the beginning. I did not find this to be the case, and I'm no prodigy. It does have some of it's own words that are explained in the back of the book if needed, but said words are also presented with enough context to give you a good idea of what they're talking about. You have to push through a little at the beginning, but everything falls into place quickly enough.

From cover to cover it is interesting and exciting. There is a reason it is hailed as such a timeless story, and I implore that you find the time to experience it for yourself.
Meer lezen
98 mensen vonden dit nuttig
Vertaal recensie in het Nederlands

D.A. Drake
5,0 van 5 sterren Not Just a Classic Science Fiction Book, A Classic Period
8 augustus 2017 - Gepubliceerd op Amazon.com
Geverifieerde aankoop
Far-reaching and mind-expanding, when I first read Dune in the '60s I had my mouth open most of the time, and could only read half a page or so at a time before looking off into space for a few moments in awe, thinking about what I had just read. Thousands of years in the future, where mankind is able to control every single muscle in his body, where computers (which, when I read the book, were relatively new at the time) had been surpassed hundreds of years earlier, where mankind has spread an empire across the universe, and was beginning, through evolution and technology, to advance beyond humankind...a towering classic, anyone with any interest in science fiction at all must read this book. (and btw, I like David Lynch's 1984 feature film, you had to have read the book to follow the movie.)
Meer lezen
40 mensen vonden dit nuttig
Vertaal recensie in het Nederlands

Kindle Customer
5,0 van 5 sterren Each time I read Dune I become richer
20 februari 2017 - Gepubliceerd op Amazon.com
Geverifieerde aankoop
I'm not actually sure how many times I've read Dune; every decade maybe. It is extraordinary how each time I do it speaks of something different to me as I age. My first read as a young teen in the '70s was overwhelming with words and scenes I'd never experienced before. It was magical and one of the mind expanding elements of the New Age. Now, in 2017, it comes full circle to the fears of environmental impact and government off the beam. I've aged, and the story still offers an amazingly lucid reflection of reality. I highly recommend it across anyone's life span.
Meer lezen
294 mensen vonden dit nuttig
Vertaal recensie in het Nederlands

Brian Lu
5,0 van 5 sterren Simple story but clearly lots of depth i haven't uncovered
21 juni 2017 - Gepubliceerd op Amazon.com
Geverifieerde aankoop
When i was starting this book, i felt like the language was intentionally simplified for a younger audience. That might still be the case - however after reading the appendices it is clear as day that this was a mightily complex world that was brilliantly thought out and modeled after a ton of existing myths and religions that have gone through earth.

The plot is reasonably simple, interactions transparent, but there is a ton of wisdom in every other sentence. Hubert snuck in pithy statements left and right to complement the story that unfolded.