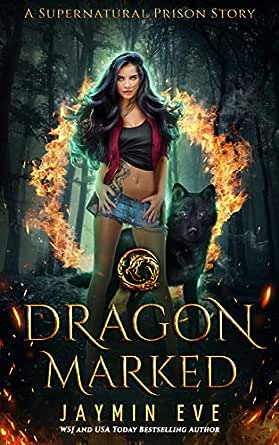 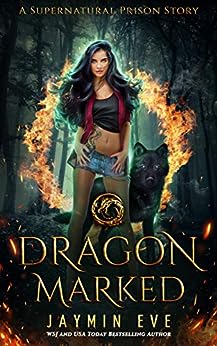 It's time for the dragon marked to rise...

Jessa Lebron doesn’t have a lot to complain about. Her father is the alpha of their wolf pack, she lives in Stratford, a protected supernatural prison town, and her best friends, the Compass quads, are the strongest dudes of the four races: shifter, vampire, fey, and magic user.

Yep, life is pretty much exactly how she wants it. Until the fateful day, just after her twenty-second birthday, when the mother who abandoned her, returns to the pack bearing secrets that change everything.

The biggest secret of all: Jessa is dragon marked, a designation that places her in grave danger.

For a thousand years, every supernatural child born with the mark was eliminated to prevent the rise of the dragon king, a fearsome ancient warmonger. In a bid to learn more about her fate and how to avoid the hunters, Jessa finds herself locked in Vanguard, the notorious supernatural prison. Thankfully she’s not alone. Braxton Compass, the most feared of the dragon shifters, is right there with her. Together they’ll have to survive long enough to free themselves and the other dragon marked.

Before the king rises.

*Note from author: this story was previously published by Skyscape. There are no changes to this version.

As a wolf shifter with razor-sharp senses, Jessa Lebron can perceive the slightest change in the air. And her lupine instincts go into overdrive right before her mother, who abandoned her years ago, returns to the pack bearing secrets that change everything.

The biggest secret of all: Jessa is dragon marked, a designation that places her in grave danger. The dragon marked are destined to resurrect the dragon king, a fearsome ancient warmonger. And they must be eliminated.

Soon Jessa is locked up in Vanguard, the notorious paranormal prison that houses criminal vampires, feys, and magic users. Thankfully, she's not alone: Braxton Compass, her best friend and a dragon shifter, has her back. Jessa and Braxton must find a way to free themselves and the rest of the dragon marked. But can her pack mates help her stop the dragon king before his deadly return?

sadisticmunchkin
3,0 van 5 sterren More telling than showing
3 mei 2017 - Gepubliceerd op Amazon.com
Geverifieerde aankoop
Since its a YA book, it might appeal to a younger audience than me, but this book was a lot more about telling than sucking you in to any story. The first half of the book is just describing the relationship jessa has with her quadruplet friends (and one of them is obviously the love interest) and telling the reader about the supernatural work. But after all that, I know nothing about the supernatural world except for the stuff I've seen before and all I know about the quadruplets is that they are all very similar and love jessa. There was also a lot of protagonist centered morality. One scene that comes to mind is where jessa and a boy were sparring in a defense class, the boy punches her in the face, and the teacher says she can go home, but then all her friends are allowed to beat up the boy and hang him up by his feet and threaten him and nobody says anything. And the new people who come in as characters have very little personality and a very jarring transition. Jessa hates her mom in the beginning, oh wait scratch that she loves her. Her sister is a jarring surprise that she's almost angry about, but then they're suddenly best friends despite barely interacting. Louis the wizard might be a lot interest might be 100 year old mentor, who knows? The witch we saw in chapter whatever? Oh yeah she's joining the group on the very last page.
But I can't be too negative. The story did have some potential. I like the idea of jessa' s abilities and how they might enact some evil prophecy or something. I really like the ideas presented, but they needed a lot more development and alot more immersion for the reader. I hate leaving negative reviews but this is what I got

First off, let's start with the characters. Jessa is a strong female lead. Although her best friends are protective males, I never got the impression that she was sitting around waiting for them to save her - she knows how to defend herself, verbally and physically. Also, she had strong opinions and stood behind them, but it never became annoying. I thought the author did an excellent job in creating the characters. Everyone from the main characters to the supporting characters were well thought out and distinctive. It didn't feel like one of those stories where the author put all their energy into two or three characters and everyone else is just there. By the same token, we're introduced to quite a few characters, but I never felt confused or overwhelmed.

Then we get to the story. It kept me interested the whole time, and it was definitely different than anything I've read before. Also, even though this book is part of a series, the author gave us a full-length novel, unlike some of the series I've read lately that felt like the length of a sitcom episode. On the other hand, I didn't feel like the story got bogged down with superfluous events. Everything that happened felt like it had a purpose. There is a cliffhanger ending, but it feels like a natural break (more like "I wonder what adventures await them", rather than "I'm turning the next page because the end of this scene has to be here somewhere").

In terms of romance, there isn't very much in this first installment. You definitely see the stage being set for relationships between several pairs, but there is a slow build. To be honest, even though there wasn't any kissing or sex or even any dating relationships, the quiet, firm support and protection Braxton shows for Jessa melted my heart. I feel like the friendship that already exists between the two is such a firm foundation for an amazing relationship that I can't wait to see them progress, but I do hope we see some major strides in the romance department in the next book because I feel like we will lose forward momentum without it.

In short, if the summary interested you enough to check the reviews, I'd say read it! I can almost guarantee you won't regret it!

Red Ridinghood
1,0 van 5 sterren Many issues including cliffhanger
30 augustus 2019 - Gepubliceerd op Amazon.com
Geverifieerde aankoop
My biggest issue is that 3 books should have been 1 and each book ends in a massive cliffhanger where it would have been better to have been 1 book (I've read longer books that were one book) or had the endings tightened up a bit better. Lots of "showing" and not telling. And overuse of "dimples". Yes they are cute and maybe sexy but mentioned about every other page. And most of all, I really didn't like Jessa. She's a spoiled selfish brat. I like a good b*tchy alpha but she came across as shallow and selfish. She had the quads who adored her, and friends that assist her, and yet when her mother and sister come back and have no friends/allies, she treats them like crap, all the way through the 3rd book, and shifter alphas, especially ones meant to be leaders, should be protective and should see when others need guidance and frienship . The world building here is pretty good, the plot interesting but the writing left alot to be desired.
Meer lezen
3 mensen vonden dit nuttig
Vertaal recensie in het Nederlands
Ga naar Amazon.com om alle 1.406 recensies te bekijken 4,6 van 5 sterren
Terug naar boven
Over ons
Verkoop bij ons
We helpen je graag
© 1996-2020, Amazon.com, Inc. en dochterondernemingen