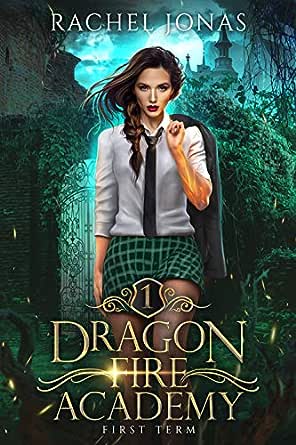 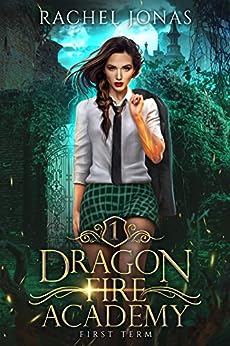 I get it. They think I’m dangerous, but I’m only on their island to learn. Not to destroy it.

This is another unfortunate side-effect of being the freak who descended from all three supernatural lineages. The bloodthirsty dragons, the destructive wolves, and the disloyal witches. Some believe that, when I transition in a few months, there’s a slight, teeny tiny chance I could unleash hell on the supernatural world. Call me crazy, but I’d know if I harbored that kind of power inside me.

My entire life, all I’ve wanted was to be normal. Hence the reason I didn’t think twice about trading in my crown for a stack of books. I’ve got three terms on this island to prove the naysayers wrong, including my chaperones—Kai, Ori, Paulo, and Rayen.

These four are gorgeous, but also ominous as heck. Babysitting me has clearly taken their focus off something they’ve deemed more important. So, now they go out of their way to make my life a living hell, with hopes that I’ll give up and leave.

You could cut the tension between us with a knife, but what’s weird is I don’t hate them all the time. There are even odd moments when I catch them watching me. And not in their usual “wish-you-were-dead” sort of way.

Even if I survive the academy, there’s still no guarantee these four and I won’t kill each other before graduation.

***
"Noelle and her dragons have captured me. Four Dragon warriors and each has their own story to tell, their own voice, and they come together so smoothly. This book is so epic!" - Kalli's Book Nook

***
Note: DRAGON FIRE ACADEMY is an upper YA/NA reverse harem romance. This series will take you on a brand-new journey with a descendant of the beloved Seaton Falls shifters, featured in THE LOST ROYALS SAGA. So, keep an eye out for cameos from some of your favorite characters! New readers, rest assured; it’s completely unnecessary to read the previous five-book series before embarking on this fresh chapter, set in a world filled with fierce wolves, hotheaded dragons, and powerful witches you don’t want to cross. Scroll up and grab your copy of Dragon Fire Academy 1: First Term!

TXBRITGAL
5,0 van 5 sterren 💖LOVE this spin off from LOST ROYALS series!!!!
13 augustus 2019 - Gepubliceerd op Amazon.com
Geverifieerde aankoop
Wow! This spin off from the authors LOST ROYALS SAGA series has left me speechless and wanting MORE MORE MORE!!! it's definitely not necessary to have read the original series, but it might give you a slight edge regarding the world this book resides in. Noelle is the princess of the Dragon and wolf kind on the mainland. Her mother and father, Evie and Liam both legends among their kind. Come to think of it, so are the majority of her family. Desperate to become a member of The Guard, Noelle had a plan and part of that is to go to the Fire Academy. First of course she must earn entry! Suffice to say that gaining entry was the easy part! Thankfully her parents didn't raise spoiled or weak children 😉. Upon landing on this majestic island that houses the Academy, Noelle learns that FOUR hour, hulking men are to be her mentor/guardians for the duration. As if that doesn't annoy her enough, they all seem to have equally massive chips on their shoulders and think she bought her way into her spot. Oh and there's something odd going on here. She can't put her finger on it, but something kids going on that they're trying to keep a lid on. Watch this fierce, fiesty big hearted, loyal and amazingly strong warrior princess brave everything that comes her way. To top it all off, the time is nearing for her first shift. Until then she's no clue if her dragon, wolf or witch will become dominant. It doesn't help she's the first of her kind to carry all three, and she's terrified of letting her parents down or harming anyone on the island. Strange dreams about Darkness also keep haunting her sleeping hours. Combined with having the hots for the fearsome foursome and have her current situation in a nutshell. I for one was cheering her on every step of the way!!! Oh, and prepare yourself for a jaw dropping cliffhanger making you scream to the sky wanting book two! I've yet to read a book by this author and be disappointed. Glad to see that streak still holds!
Meer lezen
12 mensen vonden dit nuttig
Vertaal recensie in het Nederlands

Bec Wolfe-Thomas
1,0 van 5 sterren Just no
5 september 2019 - Gepubliceerd op Amazon.com
Geverifieerde aankoop
This is one of those books where people are told not to do something and they aren't told why they aren't supposed to do it for reasons. The majority of the grief could be avoided by a simple explanation but then there wouldn't be a plot device to move the story forward. Then add in a not romance and I just can't. DNF at 50%
Meer lezen
7 mensen vonden dit nuttig
Vertaal recensie in het Nederlands

Kalli
5,0 van 5 sterren this book got me hook, line, and sinker
14 augustus 2019 - Gepubliceerd op Amazon.com
Geverifieerde aankoop
I was blown away by the artistry on the page. The pictures she painted with the written word were exactly that - art. It was a tapestry of emotion, image, and imagination woven into an entire world where anything was possible. To say I was hooked is downplaying it. I fell in love with the characters, their flaws, their nuances, their individuality, and uniqueness. I have more book boyfriends than I knew what to do with, and the way she writes her female character is nothing short of awe-inspiring. They are strong, resilient, and hold the world in their hands without being snobbish. This is a branch off of Evie and Liam's story and once more I am swept up in the story. Also, I feel a little dirty for all the naughty thoughts about Liam, considering who this new book is about. LOL!! Noelle and her dragons have captured me. Four Dragon warriors and each has their own story to tell, their own voice, and they come together so smoothly. This book is so epic. Just like all her other books, this one is unpredictable. Just when you think you have it pegged and the good guy or bad guy is locked in, you're taken on a wild ride, on the edge of your seat, breath held in sweet anticipation. I loooooooove the new dragons and I am excited about this story. I'm seeing bad guys and allies everywhere, but I'm a little paranoid cuz I'm never right when it comes to her books.
Meer lezen
2 mensen vonden dit nuttig
Vertaal recensie in het Nederlands

Mr. Thomas A. Mckewen
3,0 van 5 sterren Lightweight fun read but not as good as the series it was derived from
24 augustus 2019 - Gepubliceerd op Amazon.com
Geverifieerde aankoop
I just could not get invested in the characters in this one. The original series has a stronger story line and better characters. I just found the heroine to be written as if she was about twelve not twenty and the dragons had nothing going for them at all. Not enough back story on the characters. Perhaps the author will flesh them out in the rest of the series as there is a lot of growth needed for them to even become interesting at this stage.

Not sure I can recommend this one but if you have not read the earlier series it is well worth reading.

Mona Brown
5,0 van 5 sterren What an amazing story
26 september 2019 - Gepubliceerd op Amazon.com
Geverifieerde aankoop
After reading this book, I can't believe that this is the first time I've ever read a book by Rachel Jonas. The story and characters just draw you in and won't let you go. The way she describes the island makes me want to go there. The story is so well written that I had a hard time putting it down and kept thinking about when I was supposed to be working. I can't wait to see what happens next and learn more about the darkness, the other students and what exactly Noelle's hybrid form and powers will reveal.
Meer lezen
Vertaal recensie in het Nederlands
Ga naar Amazon.com om alle 176 recensies te bekijken 4,7 van 5 sterren
Terug naar boven
Over ons
Verkoop bij ons
We helpen je graag
© 1996-2020, Amazon.com, Inc. en dochterondernemingen