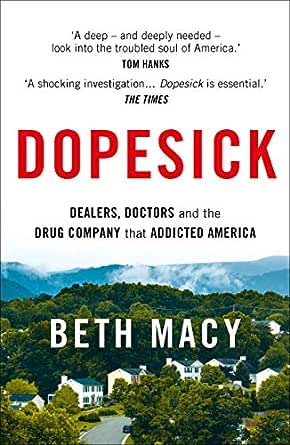 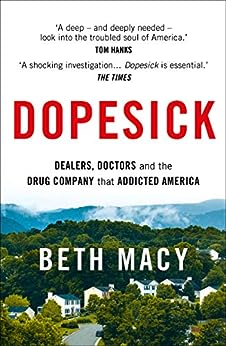 "This book is comprehensive, compassionate and forceful. No matter what you already know about the opiod crisis, Dopesick's toughness and intimacy make it a must."--Janet Maslin, New York Times

"Macy reports on the human carnage with respect and quiet compassion."--Gabriel Thompson, The San Francisco Chronicle

"Macy's book doubles as a history and a call to action."--Inside the List, New York Times Book Review

"In Dopesick, journalist Beth Macy chronicles the crisis at large, and holds a mirror up to the pharmaceutical companies that are fueling it. Macy does exhaustive research for her books and it's encouraging that, despite all she's learned, she still has hope that our country can effectively combat this epidemic."--Amazon Book Review

"Dopesick pulls together [Macy's] decades of research and interviews to highlight why and how doctors, dealers and drug companies conspired (in some cases knowingly) to get large swaths of the American population addicted to painkillers."
--Jessica Roy, Deputy Editor of Elle, Best Books of 2018

A TIMES BOOK OF THE YEAR.

'A shocking investigation ... [Dopesick] is essential' The Times.
'Shifting effortlessly between the socio-political and the personal, Macy weaves a complex tale that unfolds with all the pace of a thriller' Observer.
'Dopesick is a deep – and deeply needed – look into the troubled soul of America' Tom Hanks.
'Dopesick goes to the heart of one of the most urgent problems of our time' The Tablet.

Beth Macy reveals the disturbing truth behind America's opioid crisis and explains how a nation has become enslaved to prescription drugs.

This powerful and moving story explains how a large corporation, Purdue, encouraged small town doctors to prescribe OxyContin to a country already awash in painkillers. The drug's dangerously addictive nature was hidden, whilst many used it as an escape, to numb the pain of of joblessness and the need to pay the bills. Macy tries to answer a grieving mother's question – why her only son died – and comes away with a harrowing tale of greed and need.

A BP Fan
5,0 van 5 sterren Read this book!
8 augustus 2018 - Gepubliceerd op Amazon.com
Geverifieerde aankoop
Even if you normally don't enjoy nonfiction, you simply HAVE to read this book. It gets to the heart of why more Americans die from drugs in a year than were killed in the entire Vietnam war. And the list of doctors, drug companies, and government agencies that are doing virtually nothing about it is long and disheartening. It's time for American to wake up!
Meer lezen
108 mensen vonden dit nuttig
Vertaal recensie in het Nederlands

gammyjill
5,0 van 5 sterren Superb look at addiction...
7 augustus 2018 - Gepubliceerd op Amazon.com
Geverifieerde aankoop
Journalist Beth Macy's new book, "Dopesick: Dealers, Doctors, and the Drug Company That Addicted America", has been getting a lot of good press, prepublication. Now that the book has been released, readers can see the vastness of these drug problems, as concentrated in the back roads and suburbs and downtowns of Virginia. The problem is opiods and the result of the problem of opiods has turned into an epidemic of addiction and death.

No parent wants to think the opiod crisis has hit their own homes and families. No, that's other people's problems; the poor, the badly raised, the down-and-out, the truly addicted. But about 30 years ago, doctors and law enforcement in the backwoods of Virginia and in the towns as well, began noticing the overdoses and deaths. Tracing the deaths pointed to Oxycontin - a miracle drug made for late-stage-cancers - that were being prescribed over and over again by doctors either unwilling or unable to prescribe the right pain meds for the rigtht pain. Oxycontin was being pushed on doctors by its manufacturer, Purdue Pharma, which is owned by the Sackler family. ("The New Yorker" had a bombshell report about the Sackler family, their philanthropy, and Purdue in their October 20, 2017 issue that's worth getting your hands on if interested.) Macy covers a court case where Purdue was sued by various state governments for it's pushing of Oxycontin and their other pain products. The company was convicted and the three company officials received sentences of community service...

But Beth Macy keeps asking the questions in her book. Why are people of all ages getting addicted? How many families are destroyed by having children - or parents - as addicts? Does the fact that many addicts have taken Ritalin and other AHAD meds before becoming addicted to Oxy and other drugs? How many stays in rehab does it take to break an addiction? There seem to be as many questions as there are addicts.

Beth Macy's book is a very, very readable book about a major problem, which began in the central Appalachia area of I81 Virginia, and has radiated out to all of us.
Meer lezen
98 mensen vonden dit nuttig
Vertaal recensie in het Nederlands

missmickee-bookreview
5,0 van 5 sterren For The Love of Oxy: The Shocking True Story of the American Opioid Crisis and Epidemic....
7 augustus 2018 - Gepubliceerd op Amazon.com
In 2012, author and investigative social journalist, Beth Macy began writing about the worst drug (heroin) epidemic in world history. “Dopesick: Dealers, Doctors, and The Drug Company That Addicted America” began in the hills and valleys of Appalachia, the mid-western rust belt, rural Maine before rapidly spreading throughout the U.S. In 2016, 64,000 Americans perished from drug related causes and overdoses-- outnumbering the total of those killed during the Vietnam War. Macy explored the terrible destructive impact on society, those who have helped and harmed, and the brave individuals sharing their own stories of tragedy and loss, casting aside stigma and shame to alert and help others.

In the late 1990’s, Appalachian country doctor (St. Charles, Virginia) Art Van Zee M.D. was among the first to sound the urgent alarm how OxyContin had infiltrated his community and region. Patients were admitted to hospital ER’s in record numbers from drug related causes. Rates of infectious disease including Hepatitis C, along with petty and violent crime had increased substantially, a police car was fire-bombed—addicts were desperate for cash to support their drug habit, an elderly patient had resorted to selling pills from his nursing home bed. Van Zee called public meetings to advocate and alert others of the opioid health crisis, and didn’t hesitate to file complaints against Purdue Pharma for aggressive marketing campaigns promoting OxyContin. By 2001, he and Sister Beth Davies were attending two funerals per day of the addicted dead.

In 2007, with over $2.8 billion USD earned in drug profits, Purdue Pharmaceuticals was found guilty in federal and civil criminal courts for their role/responsibility for creating the opioid epidemic, for “misbranding OxyContin”: with aggressive marketing techniques that downplayed and minimized the potential for addiction. The $600 million USD fine was worth the risk for Purdue; the executives charged were forced to listen to victim impact statements, and were compared to Adolf Hitler and the mass destruction of humanity, yet these men served no jail time. Both Doctor Van Zee and Sister Davies were outraged that none of the fine was allocated for drug recovery and addiction programs. Instead, it was appropriated for Medicaid/Medicare reimbursement and for criminal justice and law enforcement.

Macy documents the vast suffering, heartbreak of the families, friends, medical staff and first responders, the foster parents, clergy left behind to carry on after destruction and death had taken its toll. The closed down factories, lumber mills, furniture manufacturing warehouses and stores, coal mines-- jobs that had once sustained the middle class were grim reminders that for the average American-- life would never be the same again. Some desperate families impacted by “the disease of despair” had lost life savings attempting to pay for costly drug rehabilitation programs for loved ones, only to realize addiction was a lifelong process and the likelihood of relapse might be a day away. Providers of rehab facilities were not in agreement over MAT (medication assisted treatment) though medical experts contend that MAT is absolutely necessary to battle the intense cravings of addiction and increase the rates of successful treatment.
Many of the stories were harsh and brutal. Too many politicians and policy makers believe addiction is a personal moral failing and criminal offense rather than a treatable disease that robs victims of their dignity and freedom of choice. Macy’s book easily compares to Sam Quiones outstanding award winning book “Dreamland: The True Tale of America’s Opiate Epidemic” (2015). Macy is the author of the bestselling “Factory Man” (2014) and “Truevine” (2016). ** With thanks and appreciation to Little Brown and Company via NetGalley for the DRC for the purpose of review.
Meer lezen
86 mensen vonden dit nuttig
Vertaal recensie in het Nederlands

Amazon Customer
2,0 van 5 sterren Ugh-small amount of interesting info-horrible read.
29 september 2018 - Gepubliceerd op Amazon.com
Geverifieerde aankoop
NPR's interview with this author made me want to read this book.
I was immediately interested due to family members who's lives have been destroyed from the opioid epidemic.
Can't even express how disappointed I was.
The things that intrigued me about this book are almost difficult to find within it's pages.
Choppy chapters that seem to repeat themselves, incomplete,confusing information with no natural flow, flashbacks and flash forwards, feels like the authors lack of information causes her to stall throughout.
The only thing keeping you reading is the hope of a revelatory climax. Sad to say you're left with nothing.
In the words of fellow reviewer "This book is a mess"
Meer lezen
47 mensen vonden dit nuttig
Vertaal recensie in het Nederlands

Kindle Customer
5,0 van 5 sterren An eye opener
15 augustus 2018 - Gepubliceerd op Amazon.com
Geverifieerde aankoop
I have read a lot of books, 50+, a year for decades but this has to be one of the top enlightening and educational ones. It totally changes the perception of addiction and addicts and I have prescribed and taken some some of the narcotics as well as been visited by some of the drug reps.
Meer lezen
56 mensen vonden dit nuttig
Vertaal recensie in het Nederlands
Ga naar Amazon.com om alle 426 recensies te bekijken 4,6 van 5 sterren
Terug naar boven
Over ons
Verkoop bij ons
We helpen je graag
© 1996-2020, Amazon.com, Inc. en dochterondernemingen