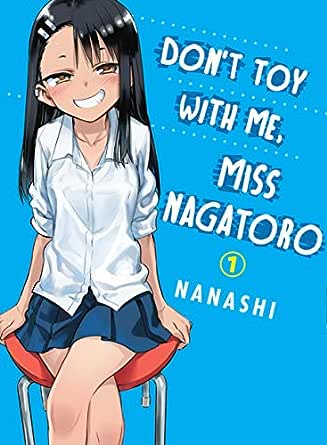 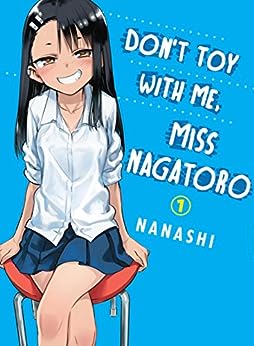 Nagatoro is a freshman in high school who loves teasing and torturing her older male classmate (Senpai). What is her motivation and why does Senpai put up with her? Does Nagatoro just want to create misery for Senpai? Or maybe she secretly likes him?
click to open popover

Aaron S.
5,0 van 5 sterren Fantastic but polarizing romance. Buy if you want something unexpected and unique.
22 november 2019 - Gepubliceerd op Amazon.com
Geverifieerde aankoop
Quick and short of it: Nagatoro is a very unique manga about a girl and a guy falling in love with each other, with the twist being that the girl starts out bullying him. Unlike most manga that generally shy away from the explicitly sexual, the central relationship has a forwardly sexual tinge from the very beginning. On top of this, the story is very focused; for the duration of this first volume, there are only two characters of any importance, the titular Nagatoro and her unnamed Senpai. It's sense of humor is raunchy and how funny you find it will vary. For all these factors, Don't Toy With Me, Miss Nagatoro is generally very polarizing, with people generally either absolutely loving or loathing it. Buy it if you want a break from the repetitive nature of most romance manga anime.
I'll also go ahead and note that the first two chapters in particular can be pretty dark, but aren't broadly indicative of the rest of the series. By chapter 3 their relationship becomes more of a teasing friendship.
Now more detailed. Personally, everything about this manga appeals to me. I love and relate to both Nagatoro and Senpai, and at various points in my teen years have been in both their positions. As someone now grown and past that, seeing their childish bullying-turned-flirtation is honestly pretty cathartic.
The art for the series is also great. Nanashi's art-style shows a lot of detail, and features a particular attention to how clothes and hair hang off his characters. Nagatoro, in particular, wears a uniform that seems big for her very small frame, and so a lot of great attention is paid to the drapery of her shirt and skirt and how it alternately clings in some areas and loosely bunches in others. The most important effect this has is how it reinforces the characters age; instead of the perfectly fit clothes that most anime characters have, making them look like fashionable 20-somethings, Nagatoro and Senpai are dressed in the cheap loose-fitting clothes I imagine most of us wore at their age.
The translation is where Id perhaps give 4 stars. Having read several fan translations of these chapters before, I knew roughly what to expect and what emotions to expect in each chapter. For the most part it nails it and even clarifies some details that the fan translations miss, but loses some others. This is most noticeable in chapter 5 where Nagatoro comes across as much less analytical and harsh when criticizing a rookie musician, but there are small instances of this throughout. Across the board though, real admirable work for such a small publisher.
The tone of this manga is extremely unique. As I mentioned before, there's a distinct undercurrent of a sado-masochistic relationship in Nagatoro and Senpai's Interactions that, frankly, you won't find elsewhere in manga. Some other reviewers have mentioned Uzaki-chan, which is also a great series, but is much much softer and sweeter from the get go than this series usually is. That said, this is also balanced with a certain innocence on the part of the characters. Nagatoro teases Senpai frequently for being a virgin, but attentive readers will quickly realize that she's no more experienced, and alternates between being as embarrassed by her own actions as Senpai to occasionally not realizing why what she's doing is inappropriate. This and the Sado-masochistic edge from before balance to make a very unique "feel" for this manga.
Lastly, minor spoilers ahead, Nagatoro is a pretty fantastic character. Senpai isn't bad but is still a bit of a audience surrogate most of the time, helped later in the manga when he starts to grow a backbone. It's not a stretch to say that a lot of people, maybe even most will be put off my how callous she is towards Senpai in the first two chapters, however there are signs as early as this that she's not near as inconsiderate as she seems. Spoilers ahead if anything I've said so far seems interesting.
From the very beginning Nagatoro goes out of her way to never put Senpai into a position where he could be publicly mocked. When she and her friends discover the manga he wrote, while her friends mock him for making it, Nagatoro's lines (The ones closest to her head) show she admires that he went as far as to make his own manga, and she then waits until her friends leave and the library is empty before critiquing it. While it's easy to take her apology at the end of chapters 1 and 2 as mocking, the illustrations that accompany the ends of these chapters as well as her lines at the start of chapter 2 suggest instead that she was being genuine. I personally consider one of the most important aspects of a character to be whether they have flaws, and Nagatoro has a great one for a young high-schooler: she gets carried away very easily, something which crops up again and again throughout the series.
She even gets character development! Throughout the later chapters we see her becoming more considerate of Senpai's feelings, and it's shown that she's ordinarikt much more reserved than her behavior around Senpai would indicate. If you needed any more evidence, at the end of chapter 2 she mocks Senpai for expecting a kiss, and my the end of the volume she has actually kissed him.

All in all my final verdict is this manga is a 10/10. If you're tired of romance manga where the characters spend 200 chapters without ever once mentioning sex and love-dodecahedrons that exist solely to provide the illusion of progress without any real character development, this one is about two teens who are obviously into each other from the get-go, and the main focus is on them developing into a couple. If you're sensitive to topic like bullying, do t automatically write this off because Nagatoro turns out to be much sweeter than you might expect. That said, it's still a polarizing story ans it's not 100% fluff like a lot of slice-of-life is.

Crap~Face McNugget
5,0 van 5 sterren It's great.
20 november 2019 - Gepubliceerd op Amazon.com
Geverifieerde aankoop
But obviously not to everyone's tastes. Research the series beforehand if you're unsure. The current rating of this book is not indicative of its quality, but a result of readers who didn't know what they were getting into. Everyone is entitled to their own opinion of course, but I feel that the current low rating misrepresents the product and felt compelled to leave a quick rating of my own. It's great.
Meer lezen
20 mensen vonden dit nuttig
Vertaal recensie in het Nederlands

Robert Fisher
2,0 van 5 sterren Nagatoro, you're no Uzaki
20 november 2019 - Gepubliceerd op Amazon.com
Geverifieerde aankoop
Recently, I bought the first volume of Uzaki-chan Wants to Hang Out! on the strength of the cover with its title character. It proved to be a charming story. Don't Toy With Me, Miss Nagatoro seemed to be similar; the cover made one wonder who this young woman is. Turns out, Nagatoro is a nasty little bully who loves bringing misery into the life of Senpai. Uzaki is sometimes be a handful, but she has a good heart and we feel that she really cares about Sakurai. Nagatoro is attractive, but it ends there. I am looking forward to the second volume of Uzaki-chan Wants to Hang Out! but I think I will skip a return engagement with Don't Toy With Me, Miss Nagatoro. UPDATE11/21/19. It has been said by other reviewers that the series will improve. Well, Citrus got off to a bad start but became a favorite. Perhaps I will give Volume 2 a chance, but Nagatoro, you'd better be playing your "A" game.
Meer lezen
3 mensen vonden dit nuttig
Vertaal recensie in het Nederlands

Number 11
5,0 van 5 sterren A quirky story of an "odd couple"
27 december 2019 - Gepubliceerd op Amazon.com
Geverifieerde aankoop
I will start off by saying that Don't Toy With Me, Miss Nagatoro isn't for everyone. The story revolves around a girl who "bullies" the MC quite harshly in the beginning. Now, with that said, Nanashi has added some AMAZING and subtle additions to the manga release that really helps.

Just about every chapter at the end has really cute "sequences" that show Nagatoro reflecting/reacting on her own actions with the MC. It is very charming and sets a very solid tone to her character and possibly why she is doing all of this.

The uniqueness in Please Don't Toy with, Miss Nagatoro comes in the form of the underlined subtle notions between it's main characters with only visuals and no words. There is a lot expressed in each panel and it is hard to pick up on all of it. This is what I find so fun and enjoyable. Nagatoro is made out to be some bully and the MC is very uncomfortable with her presence in the beginning. However, I like to affectionately refer to this series as, "How to Raise Your Boring Boyfriend" as it is a sweet story about a girl who becomes interested in some guy, but her own pride won't allow her to just come out and say it. At the same time though, she wants him to "man up" and be more "proud" and push him to be better and to do more.

In the end, this manga is a wonderful little piece and while it isn't thick with plot, it has a lot of character. If you like the spunky, cheeky girls, this is a home run for you. If you don't care for MCs bein bullied by girls, probably not.
Meer lezen
Vertaal recensie in het Nederlands
Ga naar Amazon.com om alle 39 recensies te bekijken 4,7 van 5 sterren
Terug naar boven
Over ons
Verkoop bij ons
We helpen je graag
© 1996-2020, Amazon.com, Inc. en dochterondernemingen