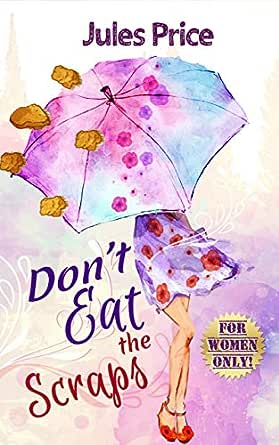 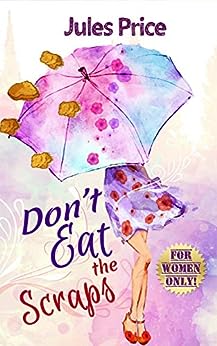 Don't Eat the Scraps: and other powerful “Jules’ Rules” for Success in any New Relationship! (English Edition) Kindle-editie

"Don't Eat the Scraps" describes the crucial and (as of now!) unknown theory of a behavior that men exhibit in the first six to eight weeks in dating. Women everywhere find themselves scratching their head, asking themselves the chin-quivering question, "Where did it all go wrong?"

In a lighthearted, provocative and hilarious way, Jules lays out all the things that women need to know in order to navigate, step-by-step, through the first months of any relationship, armed with some of the soundest Jules' Rules dating advice they'll ever receive to overcome future hurdles (and scraps!). It is a one-stop guide to thriving in the murky waters of the dating world... and have a few out-loud chuckles along the way.

Why aren't MEN allowed to read the book, you ask? It is not a male-bashing book by any means! But if they were to become aware of their own unintended pattern of scrap-flinging behaviors, they would start implementing anywhere from minuscule to dangerously large changes that would ultimately affect the entire balance of this delicate relationship equation.

Armed with this new alarming knowledge, men's behavior would most certainly morph into some kind of odd and unique strain of the original virus that would be much harder to identify, combat, and eventually eradicate! We simply need more women to understand that this pattern exists so that we don't misconstrue their intentions, and we can all live harmoniously.

So please, for the sake of all man and womankind, no men allowed...

A MUST-READ, hilarious and considerate insight into how men and women interact and ultimately misunderstand each other's intentions. Here's the secret key to go from "Scrappiness" to "Happiness!!"

RebeccaH
5,0 van 5 sterren Don’t eat the scraps!
30 oktober 2019 - Gepubliceerd op Amazon.com
Geverifieerde aankoop
Have you ever been bewildered by the behavior of men in the dating scene? If so, please read Don't Eat the Scraps immediately. Author Jules Price offers so many genius insights that explain SO MUCH about the things men do that seem like madness (or make us ladies think that we're crazy). And, it's such a delightful, approachable, fast, fun read. I was literally laughing out loud in my living room. Don't waste any more time in the dark wondering what happened with that cute guy when everything seemed to be going so great... I think you will love it.
Meer lezen
2 mensen vonden dit nuttig
Vertaal recensie in het Nederlands

Lisette
5,0 van 5 sterren Reading this book was like sitting with your good friend and hearing her dating wisdom! Loved it!
31 oktober 2019 - Gepubliceerd op Amazon.com
Geverifieerde aankoop
I was intrigued by Jules' new book so I bought the ebook version immediately and I'm so happy I did! If you're in a new relationship, or looking, this is the book for you! I laughed aloud multiple times and was nodding my head in agreement throughout her stories. It's written in Jules' voice, almost as if you're there with her chatting over coffee (or wine!) and she's sharing her experiences and knowledge! When you sit down to read her book, make sure you have some time because you'll want to read it all in one sitting! This is your good friend Jules sharing her wisdom in a friendly way. Great job Jules! I've now recommended it to plenty of friends because when you find a book that resonates, all you want to do is share!
Meer lezen
Een iemand vond dit nuttig
Vertaal recensie in het Nederlands

Kortnee Gonzalez
5,0 van 5 sterren A must-read for EVERY woman (single, married, and everywhere in between)
3 november 2019 - Gepubliceerd op Amazon.com
Geverifieerde aankoop
A must-read for EVERY woman.
Even as a happily-married woman I loved this book. It was a quick, fun read filled with tons of relatable material. I laughed a lot and feel empowered with more knowledge regarding relationship dynamics. I feel better equipped to give advice to my friends that are struggling to find "the one". I loved thinking back on the early days with my now-husband and connecting to the words Jules write about. I can't wait to share with every woman I know, especially those who have yet to find their forever-partner, but even those that are in happy committed relationships!
Thanks for words to this incredible phenomenon. I think it will be impossible to forget your words and I can't wait for your theory to become famous and known by all women!

M S
5,0 van 5 sterren Handiscrapped, just like you!
30 oktober 2019 - Gepubliceerd op Amazon.com
Geverifieerde aankoop
Don’t Eat the Scraps is a brilliant and witty collection of life lessons that every person can apply to relationships in their lives. The commentary of Jules Price will have you laughing out loud, shouting “Amen, Sister” and reaching for your highlighter to make sure you remember each of Jules’ Rules! The author has a profound way of keeping your attention with her own personal experiences, adding humor just when things start to get a little heavy. I have no doubt that this will be a book I pick up time and time again. We can all be Handiscrapped when it comes to the complicated world of dating and relationships. Do your future self a favor and get your copy NOW!

BSA
5,0 van 5 sterren Witty, charming and ver wise!
11 december 2019 - Gepubliceerd op Amazon.com
Geverifieerde aankoop
Jules approaches relationships in a funny, but seriously smart way. It really does offer some great insight in a short easy, enjoyable read. It really should be a must-read for girls on that same day they separate girls from boys in gym class and have the talk about their changing bodies in middle school. Perhaps it could save those girls a dozen or so heartaches. If you don’t know what’s happening or why you can’t seem to make a relationship stick, but this book.
Meer lezen
Een iemand vond dit nuttig
Vertaal recensie in het Nederlands
Ga naar Amazon.com om alle 39 recensies te bekijken 5,0 van 5 sterren
Terug naar boven
Over ons
Verkoop bij ons
We helpen je graag
© 1996-2020, Amazon.com, Inc. en dochterondernemingen