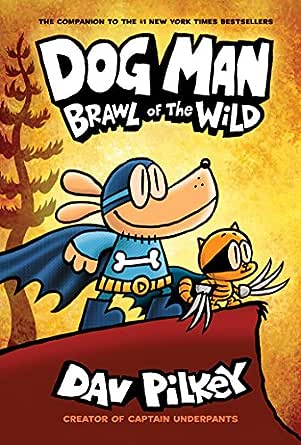 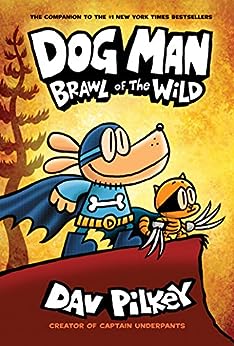 Is Dog Man bad to the bone? The canine cop is sent to the pound for a crime he didn't commit! While his pals work to prove his innocence, Dog Man struggles to find his place among dogs and people. Being a part of both worlds, will he ever fully fit in with one?

Dav Pilkey's wildly popular Dog Man series appeals to readers of all ages and explores universally positive themes, including empathy, kindness, persistence, and the importance of being true to one's self.
Alle bekijken

Amazon Customer
1,0 van 5 sterren Not Appropriate for 8 year old
20 januari 2019 - Gepubliceerd op Amazon.com
Geverifieerde aankoop
My 8 year old son was excited to read his new book but we both quickly realized that it was not appropriate for him. There is no reason for there to be multiple pages of nothing but a dog puking violently everywhere. What is my kid getting out of that? In addition, my son even found it somewhat hard to read because of the horrible english it uses. It combines words together to form words that don't even exist which is not what a second grader needs to practice reading! I tried to return this as my son is refusing to read it after the puking dog pages but return shipping was more than I paid for the book to begin with. Do yourself a favor and get your child something worthwhile to read and skip this horrible book.
Meer lezen
54 mensen vonden dit nuttig
Vertaal recensie in het Nederlands

What I found is that there isn’t anything too mysterious about its appeal. A mix of sympathetic characters, gross-out scenes and a bland but well-meaning moral seem to be the formula for its success. The emphasis on bodily humor will probably make the book more suitable for a boy than a girl.

But perhaps a review by a child would be more apt than a forty-something’s opinion. He thought it was good but not great. Dog Man is a good choice if you are looking for a book that your pre-teen will read without having to apply any pressure. But don’t expect anything too substantial in the text.
Meer lezen
22 mensen vonden dit nuttig
Vertaal recensie in het Nederlands

artemis 1291
5,0 van 5 sterren Hip Hip, Hooray for Dog Man
11 februari 2019 - Gepubliceerd op Amazon.com
Geverifieerde aankoop
Half humanoid, half canine guardian of justice and humanity in league of his unforgettably formidable allies saves the city from evil villains set out to plague it in as annoying way as fleas on a poor dog’s body. Hooray for Dog Man, our unlikely but likable hero that deserves of our heartfelt hoot and hollow. To contradict the usual glorification of hero-worshiping façade, Dog Man is none of your familiar super heroes in Marvel Comic Strips, nor is he like Batman, Superman, or even Iron man who seems to possess vulnerable human traits, and yet is equipped with wondrously technological gizmos or alien superpower. Contrariwise, Dav Pilkey’s Dog Man wonderfully embodies all things related to our unfavorable human tendencies that cloud our wondrous potential abilities - insecurity, disappointment, loneliness, and diffidence as deeply felt by Pilkey himself as a child diagnosed with Dyslexia and ADHD at school.

Pace the generalization of the book as being intent for children, this book is inclusive of literature, philosophy, philosophy, and sociology contextualized in the story and delineated in the characters without gravitas of the academia. Take Dog Man, who finds himself estranged from his colleagues at his police station except his boss, Chief. Dog Man cannot talk for the reason because he’s a dog with a human body used to belong to his K-9 policeman killed in action. As the title "The Brawl of the Wild" adumbrates, Dog Man is in a way reminiscent of Buck, the sled dog in Jack London’s classic The Call of the Wild that comes to term with his fate and even reconciliation with a treacherous human in the person of Thornton. Then there are Petey, who is supposedly a sinister jailbird, but in fact softy inside, his cute young son Li’l Petey, who never gives up on his jail- bound father Petey in his joint collaboration with Dog Man in rescue operation of the city, and stern but benevolent Chief, who seems to defend Dog Man against unjust and unfair treatments from his fellow policeman/policewomen and the pompous judge. Wisecraking and heartwarming, hilarious and sentimental, intelligent and vivacious, each of the chapters is smoothly linked to the next one with amusing in-between intermissions that deserves of the separate theaters of appreciation.

The book is an enjoyable parade of laugh and compassion wrapped up in delightful amusement of vivid colors and elegant dialogues, which can be made possible by an insightful and observant author who stands with the reader and sees hope and goodness mired in the despair of hopelessness and powerlessness at the heart of humanity. I recommend this book to all who want to spend their time reading something jovial and funny after a long hard day or just to fill their minds and hearts with a fresh breath of air. This is a scintillating read that evokes a wide arc of thoughtfulness and imagination in the minds of readers both young and old, and the young at heart.
Meer lezen
16 mensen vonden dit nuttig
Vertaal recensie in het Nederlands

BTMama
5,0 van 5 sterren Thank you Dog Man!
27 december 2018 - Gepubliceerd op Amazon.com
Geverifieerde aankoop
This lovely book came Monday 12/24. My 8 yo and 6yo have already devoured it.

My 6yo is not a confident reader. He’s great at reading but doesn’t seem to trust his own abilities. Something really clicked with him a week ago and this kiddo binge read all 5 Dog Man books so he would be caught up for #6.

I love how these books spark a love of reading and a lot of laughs.
Meer lezen
19 mensen vonden dit nuttig
Vertaal recensie in het Nederlands

ReaderMomCarissa
5,0 van 5 sterren Great continuation of this series
31 december 2018 - Gepubliceerd op Amazon.com
Geverifieerde aankoop
My son loves these books! We pre-ordered this book for him so he could continue his collection. This one was one of his favorites so far. He literally laughs out loud and loves reading them with his dad. Any book that has my kids excited to read is a great accomplishment in my opinion!
Meer lezen
15 mensen vonden dit nuttig
Vertaal recensie in het Nederlands
Ga naar Amazon.com om alle 995 recensies te bekijken 4,9 van 5 sterren
Terug naar boven
Over ons
Verkoop bij ons
We helpen je graag
© 1996-2020, Amazon.com, Inc. en dochterondernemingen