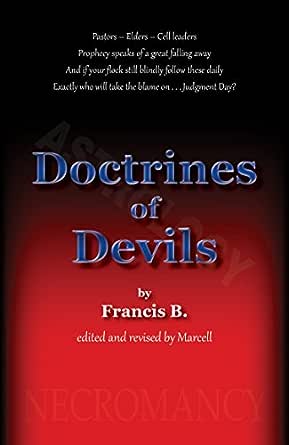 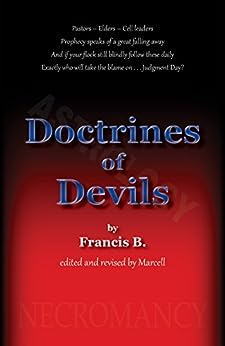 35 subjects known as doctrines of devils are taught in Satanism across the world and were specifically created by demonic spirits. None of them are Christian in any form or fashion, therefore any believer participating or attending a practiced craft just once – has broken their spiritual hedge of protection . . . previously enforced by their guardian angel.

Up until July 1968 these doctrines were being taught to 70 000 members across S. Africa on Thursday evenings by their Magus High Priest, Phil Botha. And after God saved him and allowed him to escape from the Left Hand Path, in the first two years of his ministry, over 2 000 practicing witches (who served under him) accepted Christ and were all filled with the Holy Spirit when he exposed the truth about the doctrines of devils to them.

Pastors need to read how Satanists are trained to infiltrate churches, get voted onto all committees that stop water and Spirit baptism and the Rapture from being taught. Seven churches (of Satan) are flourishing in S. Africa under a cloak of Christianity. Most of them receive financial aid from the Movement to continue preaching doctrines that are also taught in Satanism. All 7 of these churches are exposed in this book by Phil as he was the only one allowed to sign the monthly checks when he ruled as Magus High Priest.

Letetia Parker
5,0 van 5 sterren Eye opening!
29 januari 2017 - Gepubliceerd op Amazon.com
Geverifieerde aankoop
I had been waiting and looking forward to the release of this book for quite a while...it was truly worth the wait. I highly recommend that everyone read it and also the other book by Francis B that contains PHIL Both A's testimony. Life changing and informative to say the least!
Meer lezen
Vertaal recensie in het Nederlands
Ga naar Amazon.com om alle 1 recensies te bekijken 5,0 van 5 sterren
Terug naar boven
Over ons
Verkoop bij ons
We helpen je graag
© 1996-2020, Amazon.com, Inc. en dochterondernemingen