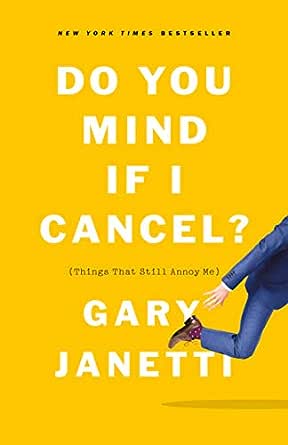 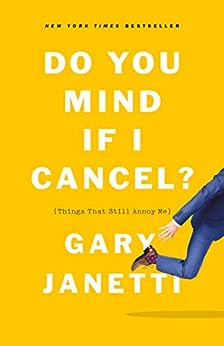 Do You Mind If I Cancel?: (Things That Still Annoy Me) (English Edition) Kindle-editie

"Gary Janetti's book is so rolling-on-the-floor funny, so brilliantly observant, and so full of heart, I'm sure a jealous Prince George will decree that Gary be locked up in the Tower of London."
-- Kevin Kwan, New York Times bestselling author of the Crazy Rich Asians trilogy

"It's no surprise that Gary Janetti's book is laugh-out-loud funny. It is just as cutting, wild, and droll as I hoped."
-- Taylor Jenkins Reid, New York Times bestselling author of Daisy Jones and the Six

"Do You Mind If I Cancel? is hilarious. Gary Janetti makes waiting tables at Bennigan's sound like one of Dante's circles of hell. It's one of the funniest stories I've ever read. Thank you, Gary Janetti, for making me fall in love with cruise ship puppeteers, and for giving Judith Light her goddam due."
-- Helen Ellis, New York Times bestselling author of American Housewife and Southern Lady Code

"The writing of Gary Janetti, whether televised or tweeted, is famously incisive and sharp-tongued. What a revelation it was, therefore, to discover in these revealing personal essays an artist of great tenderness and vulnerability. And he's still funny as hell."
-- Armistead Maupin, New York Times bestselling author of The Tales of the City

"Almost as soon as I began to read Gary Janetti's Do You Mind If I Cancel?, I found myself feeling the way I felt when I first encountered Fran Lebowitz and David Rakoff: laughing and wanting to shout out the best bits to whoever else was in the room, even if no one else was there. This crazy quilt of memoir, cultural history, one-liners aplenty, and periodic arias of hopefulness, frustration, and brashly rude rage, is a work of intertwined great humor and great feeling. I've already lost my copy, snatched up by its next eager reader."
-- Benjamin Dreyer, New York Times bestselling author of Dreyer's English

"Gary Janetti, the voice behind some of TV's funniest comedies and a social media force (as Gary himself might say, you really should know this), finally takes center stage with this collection of raw, acerbic, and unflinchingly honest essays. As soon as I finished this book, I started all over again -- that's how much I never wanted it to end."
-- Steven Rowley, bestselling author of Lily and The Octopus and The Editor

"These essays explore his dreams of becoming a soap star, the struggle of lusting after an unattainable coworker, and daydreams of fabulous success and the revenge it would allow are sure to satisfy Janetti's army of fans and enlist more than a few new recruits."
-- Town & Country

"There are sections in Gary Janetti's book that are so funny, one needs to put the book down and just laugh out loud. This is particularly embarrassing on the subway, but it is good advertising for the book... Do You Mind If I Cancel? is packed with funny lines, wistful memories, and the kinds of coming of age experiences we all have."
-- The New York Journal of Books

"A memoir that manages to be both intimate and imbued with the punishing wit he brings to his Instagram."
-- InStyle

"From “Family Guy” to his own Instagram account, Janetti has been behind some of his generation’s greatest comedy. This book of essays is no exception."
— The New York Times

Gary Janetti, the writer and producer for some of the most popular television comedies of all time, and creator of one of the most wickedly funny Instagram accounts there is, now turns his skills to the page in a hilarious, and poignant book chronicling the pains and indignities of everyday life.

Gary spends his twenties in New York, dreaming of starring on soap operas while in reality working at a hotel where he lusts after an unattainable colleague and battles a bellman who despises it when people actually use a bell to call him. He chronicles the torture of finding a job before the internet when you had to talk on the phone all the time, and fantasizes, as we all do, about who to tell off when he finally wins an Oscar. As Gary himself says, “These are essays from my childhood and young adulthood about things that still annoy me.”

Original, brazen, and laugh out loud funny, Do You Mind If I Cancel? is something not to be missed.

JFedd1111
1,0 van 5 sterren Not at all what I expected- disappointing
28 oktober 2019 - Gepubliceerd op Amazon.com
Geverifieerde aankoop
Heard about the book on Kelly Ripa’s show and ordered it. I had to stop half way through, it was not good at all. The book jumps around chapter after chapter which after the fourth chapter I came back to Amazon to see what was going on with it and learned each chapter is a essay. There is no rhyme or reason and this man is so into himself- I just couldn’t make myself read another essay especially after the horrific Oscar thank you speech that he rips apart a grade school bully and calls him out by name belittling him, his family (two kids have been in and out of rehab) and body shaming him. Wish I could get my money back. There is a free book exchange in my area but not even sure I would want to drop the book off there!!
Meer lezen
39 mensen vonden dit nuttig
Vertaal recensie in het Nederlands

Marco Polo
2,0 van 5 sterren his instagram is about a thousand times better
7 november 2019 - Gepubliceerd op Amazon.com
Geverifieerde aankoop
Sigh. Andy Cohen's books are like King Lear next to this. I was so disappointed after reading this book. I expected so much considering that Gary's written for 2 of the funniest sitcoms ever & that his instagram is a daily serving of wit & hilarity. This was basically the diary of a hotel bellhop daydreaming of stardom. Over the short, rainy afternoon it took me to get through this very, very slim volume, I kept thinking I was reading somebody's personal journal instead of a memoir. I am exactly the same age as the writer, came of age as a gay man in nyc at precisely the same time, but even though much of that material was relatable, it was also totally unremarkable & uninteresting. And worse for a comedy writer, unfunny. I realize he has achieved some measure of success in the cutthroat entertainment business, but the writer takes vanity & self-absorption to a whole new level. (I stopped counting the number of times he described his younger self, with a straight face, as extremely good looking with a great body. Cliche much? As one of the characters in his own sitcom will & grace once said, "No wonder the red states hate us.") And as another amazon reviewer pointed out, don't get me started on that chapter with the bitchy, imaginary Oscars speech. Cringing so hard just thinking about it. It reminds me of that old adage about not every thought that passes through one's head deserving to be expressed. In the case of the Oscars speech, I wouldn't even tell that to my therapist, let alone put it in a book. I suppose, even in the age of social media & spilling your guts (which, as Fran Lebowitz once wrote, "is just as charming as it sounds"), Gary gets a star for having the balls to reveal himself so completely, for better or for worse & for all posterity — vain, rambling & workaday as these remembrances may be. I would just hope that if he wishes to continue to do so, he'll stick to his journal.
Meer lezen
21 mensen vonden dit nuttig
Vertaal recensie in het Nederlands

jessica richter
1,0 van 5 sterren Just not funny to me
27 oktober 2019 - Gepubliceerd op Amazon.com
Geverifieerde aankoop
I fit the age group, so I get the references to T.V., etc., but it wasn't funny to me. I guess I'm the wrong audience. Quick read, and still a waste of time.
Meer lezen
19 mensen vonden dit nuttig
Vertaal recensie in het Nederlands

BK Glennon
5,0 van 5 sterren Humorous and Heartfelt
25 oktober 2019 - Gepubliceerd op Amazon.com
Geverifieerde aankoop
I read this in one day--the author writes essays about hoping to meet Patty Lupone; working at Bennigan's, at a Waldbaum's, at a hotel in New York City; coming out at college; leading teenagers on a bike tour of Europe; watching and obsessing over television shows; being an outsider while dreaming of being an insider. All along we know that eventually he makes it as a writer and producer of very successful shows, but we see him as he struggles with his identity, his desire for friendship and love, and his belief that there is something greater out there for him. These essays are funny and heartfelt--I particularly remember his essay about the magical power we assign to a slip of paper when it has the phone number of someone who has shown interest in us (of course at a time when we did not have a phone attached to us at all times). HIs allusions to Knot's Landing, Dynasty, soap operas, and the 80s and 90s in general all rang a familiar bell.
Meer lezen
10 mensen vonden dit nuttig
Vertaal recensie in het Nederlands