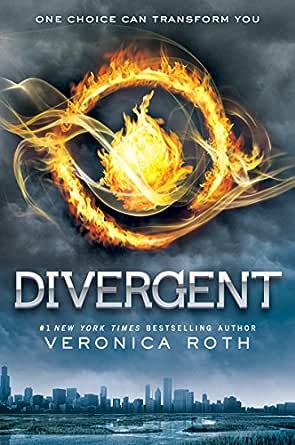 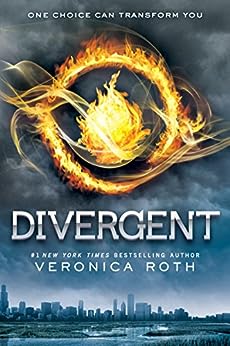 This first book in Veronica Roth's #1 New York Times bestselling Divergent trilogy is the novel the inspired the major motion picture starring Shailene Woodley, Theo James, and Kate Winslet. This dystopian series set in a futuristic Chicago has captured the hearts of millions of teen and adult readers.

Perfect for fans of the Hunger Games and Maze Runner series, Divergent and its sequels, Insurgent and Allegiant, are the gripping story of a dystopian world transformed by courage, self-sacrifice, and love. Fans of the Divergent movie will find the book packed with just as much emotional depth and exhilarating action as the film, all told in beautiful, rich language.

One choice can transform you. Beatrice Prior's society is divided into five factions—Candor (the honest), Abnegation (the selfless), Dauntless (the brave), Amity (the peaceful), and Erudite (the intelligent). Beatrice must choose between staying with her Abnegation family and transferring factions. Her choice will shock her community and herself. But the newly christened Tris also has a secret, one she's determined to keep hidden, because in this world, what makes you different makes you dangerous.

A powerful and romantic teen novel, which has sold more than 125,000 copies in the US. For 16 year old Tris, the world changes in a heartbeat when she's forced to make a terrible choice. Full of suspense, honesty and innocence, set in a futuristic society. Ages: 13
Alle bekijken

Haidji
4,0 van 5 sterren There is a kind of serum between the lines
7 december 2014
Indeling: Kindle-editie
The plot is really fast paced making it an easy read.
The concept is interesting, if not entirely believable.
I went between "the book is amazing" being catch by the emotional part of the story,
feeling as would I be one of the characters to "does this make any sense?" ...
There is so much action that you don't have the time to stop and think about it.
I found problematic the use of serums and simulations with no explanation about how and how long it works,
the division into factions, the faction less people and other things...
As I could switch my rational part off and just enjoy the action I couldn't stop to read it.
I imagined that all of this happens in another world where this all could make sense and that all this "human beings" in the story are not like
"human beings" on Earth.
I give it 4 stars because there is something...something that makes you keep reading and ignore your mind or questions
Maybe there is a kind of serum between the lines that makes you flip the pages in a reading frenzy.

Karen Blue
5,0 van 5 sterren An epic start!
17 maart 2015 - Gepubliceerd op Amazon.com
Indeling: Kindle-editieGeverifieerde aankoop
I have to start by saying that watching the Divergent movie made me want to read the book. I really enjoyed the movie and I thought for sure there was more in the book. Movie goers didn’t miss as much as I had hoped.

Beatrice is about to take the test that will determine which of the five factions she will go into for the rest of her life. The five factions are: Candor (the honest), Amity (the peaceful), Erudite (the intelligent), Dauntless (the brave) and Abnegation (the selfless). Each of the factions carries out certain job throughout the city. Those without factions do all the dirty work and have no rights in society. Born into Abnegation, everyone thinks she will stay in. On the day of the test, Beatrice learns she is Divergent. Fitting into not just one, but many factions. She chooses Dauntless and is told to keep her Divergent identity secret. In dauntless Beatrice renames herself Tris, and she is tested to determine who she really is. Her failure could leave her factionless. Her testing will reveal that she is divergent if she isn’t careful. Being divergent might just get her killed.

I can’t believe how spot on the movie was. I could completely picture the scenes while I read this book. There were only a few details left out of the movie Divergent. This book was really addictive. Even though I knew what was going to happen, I couldn’t stop reading the story. There were a few interactions left out and we get a more in depth look at Tris’ struggle to leave Abnegation and her whole family behind. The development of her relationship to Four made much more sense in the book and he was instrumental in the end. We also get more of an explanation of Tris’ fears and why Four was so different from his peers when he graduated.

I really enjoyed the character building, getting to know her friends and her fears. The author is able to draw in the reader right from the start. The location of this story is a dytopian Chicago. I liked the gradual world building in this story. The whole society is cut off from the outside. The idea that people are either of 5 personalities was really problematic for divergents because they have characteristics from more than one. The struggle to pick just one thing for the rest of your life is something a lot of young adults can probably relate to as they make career choices, so this story may feel close to home.
Meer lezen
36 mensen vonden dit nuttig
Vertaal recensie in het Nederlands

Truth be told, I saw the movie first—something I almost never do. Now that I’ve read the book, I was pleasantly surprised by how close the studio stuck to the storyline. In DIVERGENT , society has been divided into five factions—Candor (the honest), Abnegation (the selfless), Dauntless (the brave), Amity (the peaceful), and Erudite (the intelligent).

Beatrice Prior has come of age and must choose between staying with her family in Abnegation and transferring to another faction. Her aptitude test should have shown her which of the five factions she belonged in. But her test was inconclusive. She displayed equal aptitude for Abnegation, Dauntless and Erudite, revealing that she was…divergent—a secret that she’s determined to keep hidden, because in her world, what makes you different, makes you dangerous. And on the day of her Choosing Ceremony, her choice shocks her community and herself.

“Welcome to the Choosing Ceremony. Welcome to the day we honor the democratic philosophy of our ancestors, which tells us that every man has the right to choose his own way in this world. Our dependents are now sixteen. They stand on the precipice of adulthood, and it is now up to them to decide what kind of people they will be. Decades ago our ancestors realized that it is not political ideology, religious belief, race, or nationalism that is to blame for a warring world. Rather, they determined that it was the fault of human personality—of humankind’s inclination toward evil, in whatever form that is. They divided into factions that sought to eradicate those qualities they believed responsible for the world’s disarray. Those who blamed aggression formed Amity. Those who blamed ignorance became the Erudite. Those who blamed duplicity created Candor. Those who blamed selfishness made Abnegation. And those who blamed cowardice were the Dauntless. Working together, these five factions have lived in peace for many years, each contributing to a different sector of society. Abnegation has fulfilled our need for selfless leaders in government; Candor has provided us with trustworthy and sound leaders in law; Erudite has supplied us with intelligent teachers and researchers; Amity has given us understanding counselors and caretakers; and Dauntless provides us with protection from threats both within and without. But the reach of each faction is not limited to these areas. We give one another far more than can be adequately summarized. In our factions, we find meaning, we find purpose, we find life. Apart from them, we would not survive. Therefore this day marks a happy occasion—the day on which we receive our new initiates, who will work with us toward a better society and a better world.”

Beatrice—now Tris—soon learns that everything is not what it seems. But more importantly, she learns just what it means to be divergent.

Packed full of action, danger and underlying conflict, the first book in Roth’s DIVERGENT TRILOGY was a pleasant surprise. Even though I knew what was going to happen, the amount of detail and world building found in the book—as opposed to the movie—made for a highly entertaining, addictive read.
Meer lezen
2 mensen vonden dit nuttig
Vertaal recensie in het Nederlands

amazonaddict
4,0 van 5 sterren I really love this book.
10 december 2018 - Gepubliceerd op Amazon.com
Geverifieerde aankoop
Divergent is a great book! All the characters are very realistic and how they are developed makes you feel sorry for them when something bad happens. However I think that not enough was given about some of the characters, but its fine because of the fact that it is the first book. I imagine that in the second book, there will be more information and backstory about some of the side characters. Secondly, I think that there were too much side characters. This ties into the first one a bit, but I think it also deserves to be its own section. The amount of characters is way too high. Too many names to remember. The movie recreation is much better because its easier to remember faces of characters than their names. Thirdly, the book seems to stall in some places, making it boring for a chapter or two. But the book is by no means bad. It is one of my favorites! There is constant action and the plot is always advancing. It has the perfect balance of predictability and unpredictability. You have an idea of what's going to happen, but the story gets to that point in an unpredicted way. Also, the book is very long. Normally this is a bad thing, but because of the constant action, it keeps the reader on the edge of their seat the entire time. Overall, I love the book, love the series, and I can't wait for what Veronica Roth puts out next.
Meer lezen
Een iemand vond dit nuttig
Vertaal recensie in het Nederlands
Ga naar Amazon.com om alle 21.668 recensies te bekijken 4,6 van 5 sterren
Terug naar boven
Over ons
Verkoop bij ons
We helpen je graag
© 1996-2020, Amazon.com, Inc. en dochterondernemingen