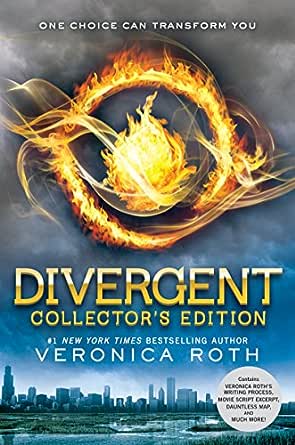 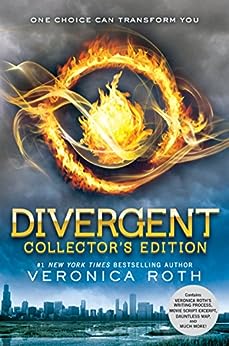 The #1 New York Times bestseller that started a worldwide phenomenon and inspired a major motion picture is now available in a beautifully designed Collector's Edition. This deluxe package features:

This edition makes a great gift for established fans who want to expand their Divergent library or who already own the Insurgent Collector's Edition; readers new to the series who want a fuller reading experience; and fans of the feature film.

Taking place in a futuristic Chicago in which society is divided into five factions, Divergent is the gripping story of a dystopian world transformed by courage, self-sacrifice, and love.

Annabele
5,0 van 5 sterren A Thrilling Start to an Awesome Trilogy
18 oktober 2015 - Gepubliceerd op Amazon.com
Geverifieerde aankoop
First things first, while many gave only One Star, most gave it between Three - Five Stars. The way I rate what I read is to Start with Five Stars and deduct from there. I found this Book without the usual reasons I deduct stars so I gave it the full Five Stars. To date, I have only given a total of Six 1 Star reviews, this one won't be added to that (short) list.

I originally started reading this series because of my daughter. I find at times the lack of either swearing or sexual promiscuity in YA novels and books refreshing. Don't get me wrong, I love a book regardless of swearing or sexual descriptions. If you've ever read a Matt Shaw book, you know what I mean (I have almost everything he's ever written). That said, on to my review.

Beatrice Prior's world is divided into five factions. When a teen reaches a certain age, they are tested for faction placement, then given the chance to join a fraction of their own choosing. Most stay in the same faction all their lives. The tests have been so fine tuned they are never wrong, and only give one result, that is until Beatrice Prior takes hers (Tris). Her test is immediately erased and manually keyed in by the test instructor, who mysteriously whispers she is divergent, and to tell NO one about her results, not even her parents.

So come initiation day, Beatrice shocks the entire community, when she chooses Dauntless. The only faction where brave, reckless thrill seekers are free to be different (to a point) is unlike any other faction, it's also the best place for her to hide her differences, to keep her secret. Because in her world, what makes you different makes you dangerous. There's so much more I could say, but anything else after these first, beginning chapters, and I would be heading into spoiler territory. So I will stop here, you will just have to read the book to find out the rest.

The Characters were well developed, with enough of background information slowly being revealed as the story progresses (instead of a lump amount that forces you to skip pages out of detail-boredom) allows you to become emotionally invested with the characters and their lives. The storyline was well thought out, keeping you captivated as events unfold. By the time you reach the end of the first book, you are completely and emotionally invested with the main and secondary characters and can't wait to start the next book in this trilogy. Keep in mind it is a trilogy so there is a lot of unanswered questions and loose ends, not to mention the cliffhanger ending. Still, I finished this first in the trilogy in a little over a day.

The world the characters live in is so believable, if it weren't for an overwhelming need to get up and stretch my legs, I probably would've read all night and beyond until I finished this first book, then continuing on to the next two, completed the entire series (the blessing and curse of buying the complete trilogy bundle).

NOTE: I purchased this book as part of the "The Divergent Series [Complete Collection] Bundle." It's the Perfect way to not only have the completed Trilogy in one place, but will save you money in the long run as well. A portion of this review is also at the Kindle Store's Complete Trilogy page as well.

When I read fiction, I want to be mentally transported to another world or place and feel like I was actually there after putting the book down. I want that place or world to linger throughout my thoughts. Divergent does this. And as a writer myself, Veronica Roth set a new bar for me, in descriptive quality. She really does show readers just how powerful words can be.

One of the things that makes me care about a book is if I am emotionally invested in the characters. Divergent does this as well, once again through vividly descriptive writing. Whatever a character is going through emotionally, you feel like you are going through it with them.

Speaking of characters, Tris was an awesome female protagonist. She was strong and courageous, but still had weaknesses, making her human. But what really made Tris so awesome for me is that she was a symbol. A symbol of what, you may ask. Answer: independent thinkers.

Part (not all) of being Divergent meant that Tris could not totally conform to any of the factions' train of thought. Thus, I see her as a representation or symbol of an independent-minded person. Think about it: We live in a society that seems to say we have to choose a certain train of thought, like a certain political ideology or maybe a certain religious denomination. But some people cannot or choose not to. Many people are independent thinkers, kind of like being Divergent. Tris mother even said about being Divergent: “ . . . our minds move in a dozen different directions. We can't be confined to one way of thinking, and that terrifies our leaders. It means we can't be controlled.” I thought it was cool how the novel portrayed independent-mindedness as a threat.

I am not in the “young adult” age range. But as a lover of great novels, even if it is YA, I found Divergent to hold my interest. And it was just as thought-provoking as any novel that is not YA.

Overall, Divergent is a great book. I can see why it has such a fan base and has international acclaim.
Meer lezen
Vertaal recensie in het Nederlands

Adam Kradel
5,0 van 5 sterren What personality to people (generally) obtain from society?
13 oktober 2016 - Gepubliceerd op Amazon.com
Geverifieerde aankoop
Beatrice is now sixteen and she must decide what faction she will join... for the REST OF HER LIFE. Her aptitude result was not: Abnegation, Dauntless, Candor, Amity or Erudite it was Divergent it meant that she harbors more than one major personality trait but she can transfer (the tester put it down as Abnbegatiokn to protect her.) Her test gave the resultbof Abnegation, Dauntless or Erudite will she dtay in Abnegation or transfer on their "choosing" day??????????!!!!!!!!!!??????????
Meer lezen
Vertaal recensie in het Nederlands

Lakeside Gramma
5,0 van 5 sterren Need to get all three books!
20 oktober 2018 - Gepubliceerd op Amazon.com
Geverifieerde aankoop
This book was a great read, but it just stops --as with some trilogies, so would advise to get all three and be ready. It is disappointing to get to the really good part and duh, you are done and no second book to head into. Interesting subject, not so different from today if you look deeply into the subject matter.
Meer lezen
Vertaal recensie in het Nederlands

Tabitha
3,0 van 5 sterren Divergent
4 november 2015 - Gepubliceerd op Amazon.com
Geverifieerde aankoop
I must be broken somehow. I did not enjoy this book like the rest of the world did. I was surprised at its abrupt ending at 85%.

I never felt that familiar sensation of immersion that I get when I'm captivated by a good book. Neither am I chomping at the bit to get to the next book. Meh....
Meer lezen
Vertaal recensie in het Nederlands
Ga naar Amazon.com om alle 56 recensies te bekijken 4,4 van 5 sterren
Terug naar boven
Over ons
Verkoop bij ons
We helpen je graag
© 1996-2020, Amazon.com, Inc. en dochterondernemingen