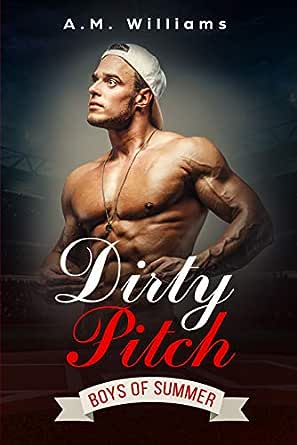 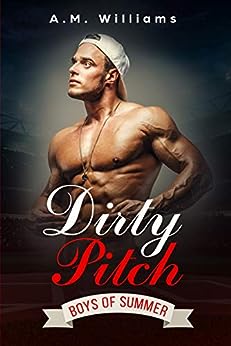 It’s all fun and games until someone loses an eye...or you wake up in Vegas married with no memory of the event.

Callie has no time for a relationship. Who needs the hassle of a constant man when she can just run through a line of boytoys with little issue?

Derek was attracted to Callie from the moment he saw her. From her black hair, to her green eyes, he wanted it all. The only problem? She wasn’t interested.

It all goes sideways at a bachelor and bachelorette party and they end up tied together in an unimaginable way. Will they be just another statistic or will they figure out they’re meant to be together?

Dirty Pitch the is first book in A.M. Williams new series The Boys of Summer. It has hot men in tight pants, a splash of baseball, and as always, a happily ever after. Get your copy today!

skikern
5,0 van 5 sterren Great Baseball Romance Read
21 augustus 2019 - Gepubliceerd op Amazon.com
Geverifieerde aankoop
If you like baseball romance, you will enjoy this book. I really liked the characters. They were interesting, well-develop[ed and have chemistry. The story is interesting, well-written with a happily ever after. In addition to receiving an arc, I purchased the book for my collection.
Meer lezen
Vertaal recensie in het Nederlands

Thi
3,0 van 5 sterren 3stars
1 januari 2020 - Gepubliceerd op Amazon.com
Geverifieerde aankoop
I liked this book up to a point. Callie just drove me nuts through most of it. I get that she has trust issues but man, was she wishy washy. I liked that Derek called her out on her BS but too little too late. Callie was just a big pill.
Meer lezen
Vertaal recensie in het Nederlands

Jennifer Pierson: The Power of Three Readers
4,0 van 5 sterren #HADMEEMOTIONAL
23 augustus 2019 - Gepubliceerd op Amazon.com
Dirty Pitch starts out with Callie waking up after a giant bender in Vegas, next to a man as she learned that they got married. She's horrified, and runs out of there, when the story goes back a couple months for the events leading up to this. Callie is a woman who doesn't want a relationship, so she hooks up with men instead. Her latest hookup is Derek, a pitcher, and they partake in a friends with benefits thing. However, she's starting to catch feelings, while Derek was already there for a while. They secretly hook up, as Derek's coach is Callie's best friends fiance, so Callie doesn't want to ruin anything there. Now back to the present, Callie is a flight risk, and refuses to even talk to Derek about them being married. It leads to serious push & pull that had me all kinds of frustrated. See, I hated that Callie was a flight risk, but she had her reasons, though I wanted her to sack up & face it. The problem for me became, the way her best friend treated her when Callie fessed up, then how Derek finally started treating her. I thought they were a bunch of douches, and really added to the problem, so I got mad when it was Callie who had to apologize to everyone. I seriously believed they owed her an apology as well, so I was very jacked up by the end. It's those feelings that kept me from giving this story a 5 star rating, and completely loving it to be honest. Please don't take that as I thought Callie shouldn't apologize, because I did, just meant that everyone should have apologized to each other. I do enjoy A.M. Williams writing style, so I know that the next hero shouldn't piss me off as badly, while the ending is a little less rushed. But please don't take my word for it, as it's just my opinion. One click it to decide for yourselves. HIGHLY RECOMMEND!
Meer lezen
Een iemand vond dit nuttig
Vertaal recensie in het Nederlands

E. Hill
4,0 van 5 sterren Decent read with some interesting twists
24 december 2019 - Gepubliceerd op Amazon.com
I really wanted to love this book, especially since I'm a big sports fan and was pulled in by the "I went to Vegas, got smashed, got married, and don't remember what happened" storyline. But man. Callie's character was not my favorite. She seemed to overreact to the marriage and didn't handle it well at all, especially considering her profession and what she dealt with on a daily basis. You do get a glimpse into why she reacts that way later on, but I wish that part had been evident earlier. I do love Derek's character, though, which is the saving grace in this book for me. He really grows on me throughout this book and really goes for his dreams - in more ways than one - even though some things sometimes threaten to get in the way of those dreams.

Overall, this book was worth the read for me, but I had to really work through my issues with Callie and how she handled things. She does have some redeeming qualities that come to light later on, and I do like Derek and Callie together in the end.

phetsamone.mitsada
3,0 van 5 sterren Odd man out.
23 augustus 2019 - Gepubliceerd op Amazon.com
So, I really must be the odd person out. I normally really like the married in Vegas trope, something about a spur of the moment marriage, the whole backwardness of the situation appeals to me. I'm just going to say, I didn't really get what Callie's whole issue was. To me, her best friend sucked and was not supportive in any way, shape or form, then again she kept a situation a secret that… there was no real need to. It wasn't like Derek was her best friend's older brother, or some other taboo situation. I found Derek and Callie's situation odd even before the marriage, friends with benefits didn't act the way they did, that actually felt more like Ward and June Cleaver, lights out waiting for him to make a move. I'm not even going into what Callie almost did, that situation had me almost putting this down and making it a DNF, but I kept on... hoping it would get better. For me it just fell flat, I totally disagree with a review that said Callie was relatable, she was IMO unstable, and made a huge mess of the situation. In the end, loads of drama and some steamy moments make up this story, I give this 3 stars.
Meer lezen
Vertaal recensie in het Nederlands
Ga naar Amazon.com om alle 39 recensies te bekijken 4,3 van 5 sterren
Terug naar boven
Over ons
Verkoop bij ons
We helpen je graag
© 1996-2020, Amazon.com, Inc. en dochterondernemingen