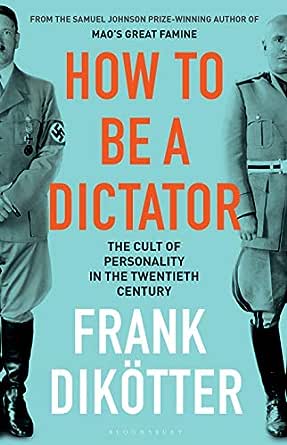 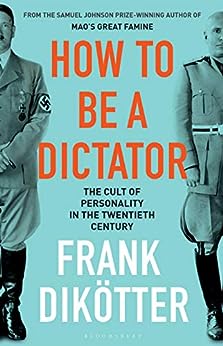 Dictators: The Cult of Personality in the Twentieth Century (English Edition) Kindle-editie

"Monuments crumble and statues fall, but How to Be a Dictator succeeds in identifying how and why linguistic domination has lasting power." - Paste

"How to Be a Dictator takes off from a conviction, no doubt born of [Dikötter's] Mao studies, that a tragic amnesia about what ideologues in power are like has taken hold of too many minds amid the current 'crisis of liberalism.' And so he attempts a sort of anatomy of authoritarianism, large and small, from Mao to Papa Doc Duvalier. Each dictator's life is offered with neat, mordant compression. Dikötter's originality is that he counts crimes against civilization alongside crimes against humanity." - New Yorker

"If [The Cultural Revolution] were widely circulated in China, it could undermine the legitimacy of the current regime . . . This book is a significant event in our understanding of modern China." --New York Times Book Review on THE CULTURAL REVOLUTION

"A fine, sharp study of this tumultuous, elusive era . . . [An] excellent follow-up to his groundbreaking previous work . . . Dikötter tells a harrowing tale of unbelievable suffering. A potent combination of precise history and moving examples." --Starred review, Kirkus Reviews on THE CULTURAL REVOLUTION

"For those who have swallowed the poisonous claim that the Communist Party deserves some credit for China's current patchy prosperity, Mr. Dikötter provides the antidote." --Wall Street Journal on THE CULTURAL REVOLUTION

"Dikötter's well-researched and readable new book on the Cultural Revolution's causes and consequences is a crucial reminder of the tragedies, miscalculations and human costs of Mao's last experiment." --The Guardian on THE CULTURAL REVOLUTION

"A fascinating account of how people twisted or resisted the aims of Mao's movement. ****" --Daily Telegraph on THE CULTURAL REVOLUTION

"The murderous frenzy of the times, which tore apart friends and families, not to speak of the Communist party itself, is powerfully conveyed." --The Times on THE CULTURAL REVOLUTION

"Fluent, compelling and based on a wide range of evidence." --Financial Times on THE CULTURAL REVOLUTION

'Enlightening and a good read' SPECTATOR

No dictator can rule through fear and violence alone. Naked power can be grabbed and held temporarily, but it never suffices in the long term. A tyrant who can compel his own people to acclaim him will last longer. The paradox of the modern dictator is that he must create the illusion of popular support. Throughout the twentieth century, hundreds of millions of people were condemned to enthusiasm, obliged to hail their leaders even as they were herded down the road to serfdom.

In How to Be a Dictator, Frank Dikötter returns to eight of the most chillingly effective personality cults of the twentieth century. From carefully choreographed parades to the deliberate cultivation of a shroud of mystery through iron censorship, these dictators ceaselessly worked on their own image and encouraged the population at large to glorify them. At a time when democracy is in retreat, are we seeing a revival of the same techniques among some of today's world leaders?

This timely study, told with great narrative verve, examines how a cult takes hold, grows, and sustains itself. It places the cult of personality where it belongs, at the very heart of tyranny.
Alle bekijken
click to open popover

Amazon Customer
3,0 van 5 sterren Best part is the introduction
6 december 2019 - Gepubliceerd op Amazon.com
Geverifieerde aankoop
I thought the introduction of this book was fascinating, discussing the cult of personality used by many authoritarians. The prefaced promised and I expected the cult of personality of authoritarian leadership to be a running thread through the rest of the book. But, at least in my read, it was not. Instead, each chapter is the history of a different dictator, treated almost entirely independently, with what I thought was far too little comparative discussion of their tactics and only some of the promised discussion of how they generated and maintained their cult of personality. The summary at the end was also disappointing, a missed opportunity to tie everything together. In the end, I think the title is misleading. This is less how-to-be-a-dictator and more independent summaries of several 20th century dictators. I learned a bit from the read, but was disappointed it was not as I expected.
Meer lezen
24 mensen vonden dit nuttig
Vertaal recensie in het Nederlands

Drew
4,0 van 5 sterren Good Concise Examples of the Cult of Personality
2 januari 2020 - Gepubliceerd op Amazon.com
Geverifieerde aankoop
Having read Dikotter's trilogy about Mao (Tragedy of Liberation, Mao's Great Famine, and The Cultural Revolution) I had somewhat high expectations for this book. That being said, this book was not 100% what I had expected. Every chapter was fascinating and I learned about some lesser known dictators, the one that stuck out to me the most was Ceausescu. The introduction was fantastic. The pieces in the book could have been put together better. There wasn't much flow to it, it was just short 25-35 page biographies highlighting different tactics used by different dictators. There wasn't any comparison or contrast, or determining which leaders were most effective or least effective, etc. However, the information in the book was great. Simply put, the execution wasn't the best. However, if I had known beforehand that it was just going to be short biographical sections I probably would have just bought their biographies. Heck, I am going to do that anyway. Worth the read if you are interested in the topic and it will become a starting point for you for some of the leaders.
Meer lezen
3 mensen vonden dit nuttig
Vertaal recensie in het Nederlands

Christian Schlect
3,0 van 5 sterren False Idols
21 december 2019 - Gepubliceerd op Amazon.com
Geverifieerde aankoop
This struck me as a minor project of a professor who has written other, more weighty books.

Here there are a series of chapters, each given to an examination of a specific tyrant. Some of the information will be well known to most students of history, such as the ones on Hitler, Mao, and Stalin. More interesting to me were backgrounds on some of the lesser known bad guys such as Papa Doc Duvalier, Kim il-sung, and Ceausescu.

Professor Dikotter ends with a summary that, interestingly, points to the current leaders of modern day Turkey and China as two to watch in the cult of personality sweepstakes for the twenty-first century.
Meer lezen
Een iemand vond dit nuttig
Vertaal recensie in het Nederlands

Lew Mills
3,0 van 5 sterren Good history, thin analysis.
11 februari 2020 - Gepubliceerd op Amazon.com
Geverifieerde aankoop
I appreciated the history, and I learned a lot. But having studied group and cult dynamics, I really hoped for some insight into how a cult of personality operates. Instead, I learned that some authoritarians rule by fear, some rely on the authority of ideology, and some get by with presenting themselves as God’s prophet. That’s useful, but I wanted to see it taken further.
Meer lezen
Vertaal recensie in het Nederlands
Ga naar Amazon.com om alle 11 recensies te bekijken 3,6 van 5 sterren
Terug naar boven
Over ons
Verkoop bij ons
We helpen je graag
© 1996-2020, Amazon.com, Inc. en dochterondernemingen