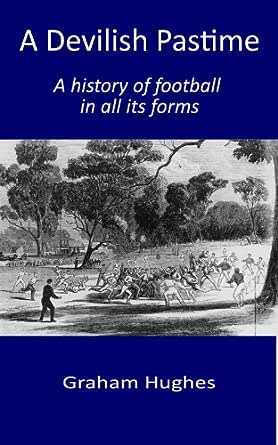 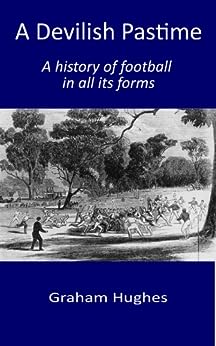 A Devilish Pastime: A history of football in all its forms (English Edition) Kindle-editie

Where did football come from? How did it get to be so popular? And why can’t we even agree on what the word ‘football’ means?

A Devilish Pastime (whose title is explained in the first chapter) tells the story of how the football-like games of the distant past and the sporting revolution of the 19th century led to the emergence of mass-audience sports that have become such a huge part of modern life:

A Devilish Pastime follows the evolution of the rules, playing styles and cultures of these sports, and how they have become popular in various parts of the world and different sections of society. As well as being a sporting history, it touches on the social, cultural and political histories of the lands where these sports have blossomed.

Along the way, you will come across a litany of visionaries, innovators and chancers, not to mention the odd eccentric; along with tales of courage, violence and tragedy. It’s a story littered with surprises – you might well find some preconceptions being challenged, and others being wiped out altogether.

While other books tell the stories of individual sports, A Devilish Pastime takes a radically different (and yet true-to-life) view – combining the histories of these inter-related sports into one.

The Kindle edition of A Devilish Pastime was originally published in 2012, and was updated, re-edited and otherwise enhanced in 2017.

David Warburton
4,0 van 5 sterren A good read for football geeks.
15 juni 2014 - Gepubliceerd op Amazon.com
Geverifieerde aankoop
Very comprehensive about the origins of the various codes of football. Almost too comprehensive. An appendix with the names of the important "fathers" of the different codes would be helpful. As it were, when you complete this book, you are familiar with how the different codes developed and why. Even if the names and dates get confusing.
Meer lezen
Vertaal recensie in het Nederlands

When a sports fan hears the word "football", different images come to mind depending on where that person lives and which games he or she follows. This book on the history of all types of "football" will have some appeal to these fans - no matter what type of "football" is meant.

Each type of football is covered in this book from its beginnings as a club sport, social gathering or a group of men who want to let off a little steam. Whether it is soccer from the English school systems, American football at Ivy League schools, or any other piece of history that is associated with a game that relies on advancing field position and kicking, this book covers it.

This book is best read with a mindset of wanting to learn history about these games. If the reader is looking to learn about a new sport, this isn't the book to do it. This is explained further later in this review. I picked up the book hoping to do just that for games like Gaelic football and was taken aback when I could not find any basic descriptions. However, after realizing that this book would not contain that type of material, I went back and re-read those chapters with the mindset of reading a history book. This made the book a more pleasant and interesting read.

If for no other reason, Mr. Hughes deserves kudos for the fantastic research on each type of football so that fans of each kind can learn something new about the history of their favorite game.

I also wish to thank Mr. Hughes for a copy of his book in exchange for an honest review.

Did I skim?
No

Did I learn anything new?

Yes - too much to list here! I was very intrigued by the concept of "masculine Christianity for the basis of acceptance of the games by the Church and also behind the justification of why some otherwise God-fearing men would participate in such brutal games. This included soccer, rugby, Gaelic football, and American football.

Pace of the book:

Somewhat slow, as I re-read some passages because I was not familiar with either the English history described in the early chapters or some of the football games described such as Gaelic. However, the pace did pick up for me when I read chapters on the games that were more familiar to me.

Outstanding research makes this book a good read. Every aspect of the games is covered, even in the sections that are shorter such as Canadian football. Each game's history, players, leagues, clubs, rule changes, social significance and outlook for the future.

This is not a book to become familiar with a sport that the reader does not have prior knowledge. A reader will not learn the basics for soccer, rugby, or other types of football. There are references to rules and some explanation of items such as player formations. But for the basic "what is this game like" reference for a newcomer - it won't be listed here.

Yes, if you enjoy any type of football game, the section that describes its history will be a good read.