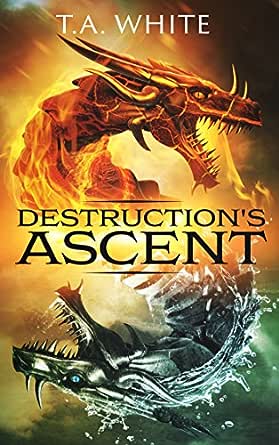 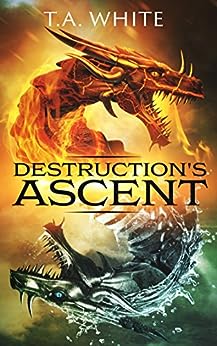 When the past rises, the world burns.

Newly conscripted into the Emperor’s dragon corps, Tate Fisher is still trying to figure out all that her new position entails. Along with an elevation in status comes dangerous enemies. Enemies who would rather see the dragons fall into ruin than remain in their current place of power.

When a dragon goes missing, followed by a child close to her, Tate is forced to confront the hidden agendas of those in the highest seats of authority. Her search for the truth takes her deeper into the maze of tunnels that lie beneath the city. It’s a place where secrets lurk and dangers abound.

There, she’ll uncover a plot whose origins stretch all the way back to the beginning of this world—one that can only end in the destruction of everything she knows and loves. The key to saving her city lies in her uncertain past. If only she could remember what that was.

Ginger Moon
4,0 van 5 sterren Loved it but....
27 mei 2018 - Gepubliceerd op Amazon.com
Geverifieerde aankoop
There were plot holes. Minor spoiler. Tate cannot remember her past but yet she can remember that she was mad? How is that possible. And as others have mentioned Tate seemed a little out of control in this book. She was not making wise decisions and was acting out far too much. There also were many cases of convenience, were things happen at just the right time. Or when Night was traveling through the tunnels, how did he know where to go, he’d never been there before? Then there was the case of the window at the end of the book. I won’t say where because it would spoil it for you. But it talks about a person standing in a lot of sunlight with a very bad attitude and then a page later Tate tells the lady in charge to open up the windows and let fresh air and light in??? And where were the clothes or what should have been a lack of them. In book 2 when she transformed into Ilith and back she woke up naked. In book 3 nothing is mentioned about them being naked or dressed after transforming. It bothered me. Because I’m assuming they were supposed to be naked yet they acted like they were clothed but then where they? And the cats, I like cats, obviously the author loves cats. There were one too many times where some character or another were described as being cat like or doing cat like things. I honestly was sick of reading the word cat. I absolutely love this series but there were some issues with this book. But all in all it’s worth reading and buying.
Meer lezen
6 mensen vonden dit nuttig
Vertaal recensie in het Nederlands

M.E.B.
5,0 van 5 sterren Amazing read/different twist from the typical "shifter" genre
10 mei 2018 - Gepubliceerd op Amazon.com
Geverifieerde aankoop
I own everything T.A. White has published, and of the book series that she's got out there, it's hard for me to say which one is my absolute favorite.

The Dragon Ridden series has truly captured my imagination because I'm a fan of shifter stories. Unfortunately, too many stories for sale on Kindle/KU take the "insta-love" approach, then the plot becomes more about the sex than a real story. That's NOT the case here.

You've got to read these books in order to really understand the story line and to see how each character develops over time, but even from book 1, I was hooked and wanted more. Tate is a fun MC--to learn about her past, while seeing how she changes with time and the influence of her "dragon" has been captivating. There are so many cool characters that are featured throughout the series, it's like seeing old friends who grow on you over time. Tate's budding relationship continues--it's like real life with the uncertainty and misunderstanding that occur between partners. Additionally, this book was enlightening into Tate's history in many ways; and although there were sections that were upsetting (kidnapped children being used magically for ill-gain), the way the book resolves the situation helps answer more background questions, while ending positively.

If you haven't tried any of T.A. White's books, please consider them, especially if you love fantasy books!

Mello Ichimaru
5,0 van 5 sterren Still Adore It
20 juni 2019 - Gepubliceerd op Amazon.com
Geverifieerde aankoop
I'm still loving this series. Things are revealed in bits and pieces, but this book finally confirms a few things about Tate and her origins. I still want to know how she and Ilith became bonded and why Tate slept and for so long at that.

We also get to see Ryu open up more and Tate become more open about how she feels about him and why she keeps a wall between them. He is slowly wiggling his way into her heart, though.

We meet some new characters , learn more about Dewdrop's past and get a big surprise at the end. Plus Christopher is still running around. With him and this new big bad on the loose, I wonder what is up next for Tate and her family.

Jessica B
5,0 van 5 sterren This is the book in the series you’ve been waiting for!!!
8 mei 2018 - Gepubliceerd op Amazon.com
Geverifieerde aankoop
First, I have to say how much I love TA White and everything she has ever written so far! I snatch up every new book of hers and devour it way too fast for my liking and Tate’s story has been one of my favorites. For me this is her most complex series that gives you clue after clue and still leaves you pondering, but now we finally get some true confirmation of what we have only suspected so far but also then succeeds in adding more layers and plots that I hope means there are many more books to come. I loved also that in this book we get to delve into the backgrounds and histories of two of our other favorite characters, Dewdrop and Ryu. And for those of us who love a slow burning romance we also make some nice steps forward on that front 😉 Each book in this series just gets better and better so do yourself a great favor and get this book then savor every exciting word. I can truly promise you will not regret it!
I was lucky enough to receive an ARC of this book from the author in exchange for my honest and unbiased review
Meer lezen
3 mensen vonden dit nuttig
Vertaal recensie in het Nederlands

Wendy D
5,0 van 5 sterren Finally, we get some answers!
20 november 2018 - Gepubliceerd op Amazon.com
Geverifieerde aankoop
I devoured the three books in this series in just under 2 days (and am anxiously awaiting the fourth!). There were a lot of answers and progression on the overarching story line that I really appreciated. We learn more about Ryu and Dewdrop as well as the other Dragon Ridden which was nice. It also opened up a whole bunch of new questions I look forward to having answered. There were a few inconsistencies that kind of bothered me (what really happens with their clothing or do they spend a lot of time naked without anyone really blinking an eye?), but I enjoy the characters and story line so much that I can still give it five stars. I love the different relationships in this series and all the "strays" that get added. You won't be disappointed reading this series!
Meer lezen
Een iemand vond dit nuttig
Vertaal recensie in het Nederlands
Ga naar Amazon.com om alle 49 recensies te bekijken 4,7 van 5 sterren
Terug naar boven
Over ons
Verkoop bij ons
We helpen je graag
© 1996-2020, Amazon.com, Inc. en dochterondernemingen